📆 19 November 2022
The day I fell in love with Helsinki all over again. As an Equatorial kid hailing from the tropical garden city of Singapore, snow was a very foreign yet magical weather phenomena. Those who yearn for a snowy environment in Singapore without travelling far or spending exorbitantly would pay our very own Snow City a visit for an artificial snow experience or be satisfied with bubble foam ‘snow’ during Christmas events.

But none of those local experience could have prepared me for my first encounter with actual snow. In fact, experiencing snow was one of the top reasons why I chose to do my exchange at Aalto University since Finland, located 60 degrees North of the Equator, is a literal winter wonderland with the capital city of Helsinki receiving snow from November to as late as April.

🌨️ Anticipations and Snow Dustings
The Finnish Meteorological Institute (FMI) defines first snow to have happened on the day when there is measurable snow in the morning observation (6 UTC), whereas permanent snow cover is defined as the longest period with consecutive snow cover days. The days leading up to first snow on 19 November 2022 were filled with anticipation and excitement given that the past few weeks were getting darker, duller, and colder, but temperatures never once dipped below the zero point for snow to form. Occasions of early morning snow dustings and frostings were early signs of wintry conditions, which excited yet confused many of us first-time snow hunters. Searching up the weather forecast became a daily or hourly ritual and the first indicative signal of favourable snow conditions was flagged by FMI to be on 19 November 2022, which coincidentally fell on Helsinki’s Christmas Opening.

❄️ Let it snow
As someone who treasures my weekend sleep-ins, you could tell how psyched up I was when I woke up at 8am to make sure I was up and ready to catch the first snow. With the Helsinki Christmas Opening starting only after 4pm, the morning was spent on getting the simulation code out for my simulation modelling and analysis project. But truth be told, my mind with thoroughly preoccupied by the thought of first snow. 9am, 10am, 11am, still no snow. But alas, 1130am. The first sighting of snowflakes falling from the sky above. It was almost entrancing. Unlike rain which pelts down hard and fast, these less dense snowflakes float down with the wind, changing course multiple times on its journey to the ground. Most break on first contact, but a few lucky ones land gracefully on the window ledge in its full, intricate form for all to revel. I could not express how delicate these snowflakes were. Even the gentlest of touch or heat applied could disfigure and disintegrate nature’s most creative art in milliseconds. And thus, the saying goes: appreciate nature with your eyes and your eyes only. ☃️ Helsinki in White
Catching the train towards the city center, it was surreal to peer out of the window and watch the cityscape which I was all too familiar with for the past 2 months gradually turn white with fresh snow. The white of the snow complements the yellow of the Christmas lights on the very green Christmas trees on a very blue day. The snowy landscape was a welcoming change that instantly brightened the streets of Helsinki. I am sure my fascination with the change in scenery was shared by both locals and travellers alike. 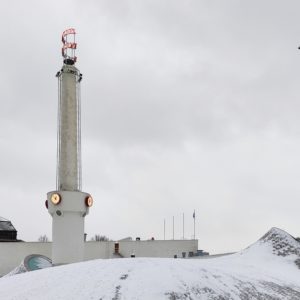 At 4pm, we began to make our way towards Senate Square for the start of Helsinki’s Christmas Opening. It was one of the first large-scale events to be held at Senate Square after a two-year hiatus due to the Covid-19 pandemic and boy, was it an experience to be part of the crowd once again! Similar to the Chingay festival in Singapore, the Helsinki Christmas Opening is conducted on a smaller scale but consists of delegates of performers and floats decked in Christmas lightings who will parade their way down the streets of Helsinki. Starting at Senate Square, the Christmas parade makes its way through the Helsinki shopping district, past Esplanadi Central Park, before making a left turn before the Harbour and back into Senate Square. It was also the perfect cherry on top to have the original Santa Claus from Rovaniemi marking his attendance at the Christmas opening. Having first snow on Christmas opening was a very well-timed coincidence, and when you put a bunch of Singaporeans where many are also experiencing snow for the first time, it creates a feel-good moment and certainly a very memorable core memory. This was one of those moments in life where you thank yourself for trusting the process because life will always work out as it has always does 😊