Yooooohoooo! Hello there, reader! You have landed up on the port of the Asian Leadership Programme’s Fitting Robot Team’s Territory. Before you set foot on it, let me warn you, this journey has its ups and downs and may or may not inspire you to start building your own robots and trap you in its clutches forever. Those who wish to leave, may do so now. The remaining, proceed at your own risk.

Welcome, our daring readers! I am Anuradha, your adventure guide for the week. As the weeks progress you shall meet the others from our team, namely, Aastha, Barry, Judith, Raymond, Tenzin, Tomy and Xiao Qi. So, let the adventure begin. We started off as excited little novices at Changi Airport, with farewells full of emotion with close friends and family. There were lots of pictures, hugs and of course, no one can forget the brightly lit eyes which yearned for a glimpse of what the future held for us.

Within a matter of a few hours we were in Hangzhou. When my group of fellow ALPens( thats what we like to call ourselves haha) landed, the weather was a stark contrast from what we had left behind at Singapore. It was rather cold, and the sky was drizzling. We spent our first two days touring the campus and exploring the different places for food. Everyone was pumped at the prospect of food as they had a variety of wonderful items, but me, being the vegetarian I am, had a rather rough time, but managed to find a few things I could eat. I had not managed to discover the Subway which was only ten minutes away, and neither the Western food shop (which offered garlic bread, vegetarian pizza and a few other options) in the street right behind the campus aka. Hou Jie.

On our third day, we had a briefing, where we were officially welcomed to the university and given some VERY IMPORTANT tips on survival in Hangzhou ( which included one on toilet papers and another on the internet access on campus). Then we were given a basic introduction to what each theme would be doing through the course of the project by the theme leading Professor or a Senior Teaching Assistant. Our TA had spoken. She had told us that we would be venturing into uncharted territories and making the female version of the lower half of the human body. Our team spoke to her at the end of the briefing and we fixed a meeting with the Professor and the team of TAs for three days later. What followed was an introduction to the cultural activities we would have to do and then we were let off to enjoy the pleasant day it was.

On my fourth day, I set out to Walmart, which was at a mall close by, in the search for eggless bread and other essentials(* read hot chocolate mix). It turned out to be a good trip, as I discovered that there were quite a lot of items at Bread Talk which I could eat. After dinner, we headed back to the hostel. Pretty soon, we had our taobao accounts all set up and ready for use. This is a huge test of intelligent usage of money as literally everything is very VERY cheap. The following day, I visited one of the main attractions in Hangzhou called West Lake or Xi Hu. It is again, filled with greenery and is very calming and soothing. What happened that day though, can be called nothing but a series of unfortunate events. Ok, I’m exaggerating, but the day did not go as planned. We started off a bit late, and when we arrived at our stop, we did not manage to get off, and as it would happen, the next stop was lightyears away. We wandered and strolled through whichever path we crossed (and managed to walk over a centuries old bridge,cross a restaurant in the setting of a temple, cross a hotel which I would like to think was haunted and almost trespass through a residential area) and by the time we reached the stop we had originally planned to start at, we had less than half an hour left. As we took the bus back, we promised ourselves to come back the next day. 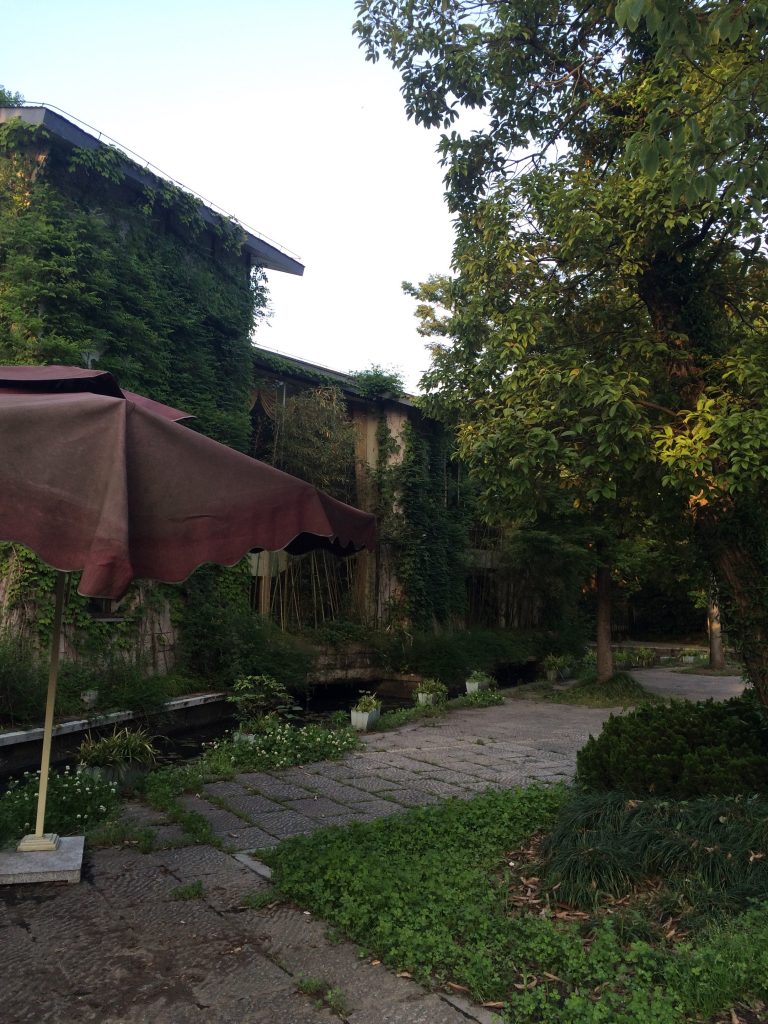 As fate would have it, the next day was the day we were to meet the Professor and the ZJU team of TAs. But we set off for Xi Hu at around quarter to seven and got to spend quite some time there.
We explored a facet of Xi Hu we had never imagined, existed. There were vast gardens filled with pretty flowers in full bloom and pretty statue. We had reached one edge of the huge lake and the serene vibes at the place had us all contemplating the meaning of life. While going back, we stopped to have lunch at Pizza Hut. It was a wonderful experience and the service was amazing.
When we were back, we had around one hour left for the meeting. 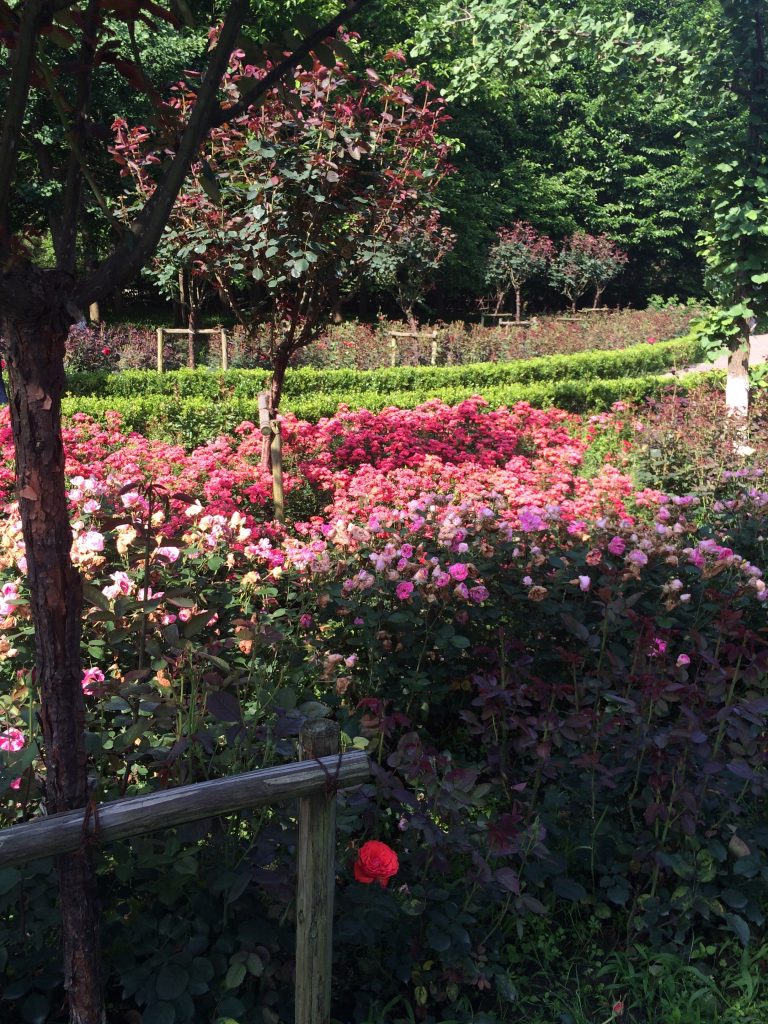 Contemplating the meaning of life 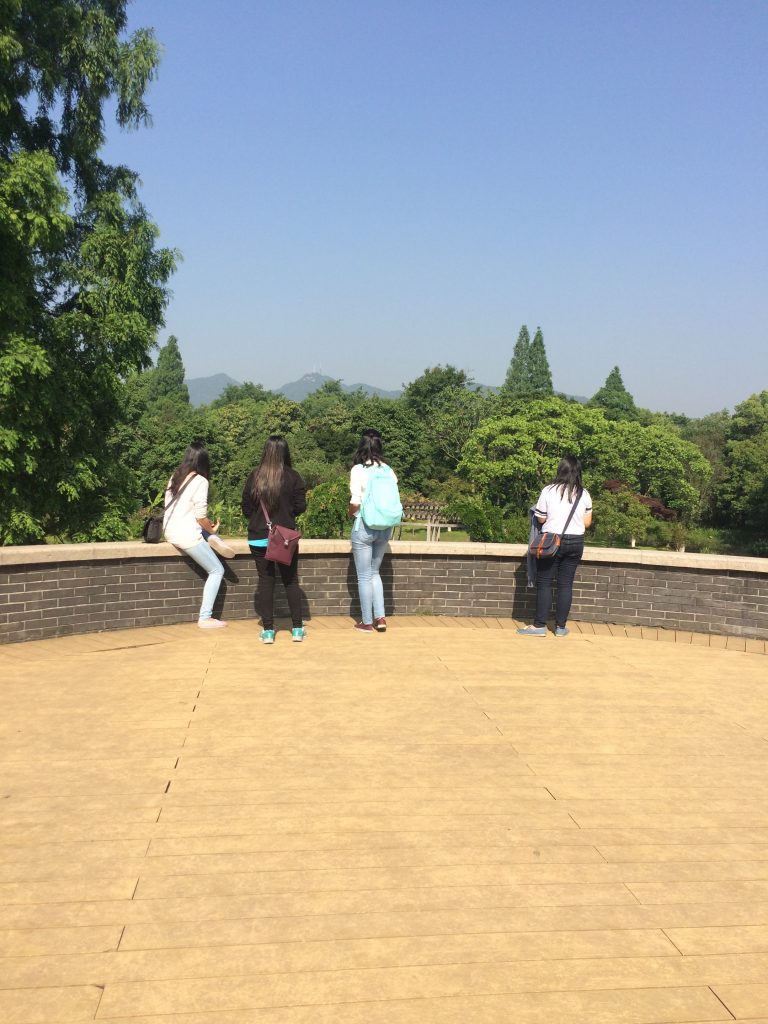 The meeting went rather well. We all introduced ourselves and then the Professor told us about the work which had already been done on these kind of robots. The male and female version of the top portion of the human body had already been made multiple times. There was also one version of the lower half for a male body which had been developed in the Hong Kong University. We were also told that if we managed to complete a prototype, we would be the first team to create a female bottom version in the school. We were then introduced to the way in which the Professor had planned for the project to move. We were supposed to divide among ourselves, the section of the project which we would give priority to. There were three sections, structure, control and interface. each of us was to choose which we would prefer to focus on during the project. The division which happened was such. Barry, Raymond and I would focus on structure, Tomy, Judith and Xiao Qi would focus on control and interface would be handled by Tenzin and Aastha. We were introduced to the kind of content we would have to work on and were given the reports of the female upper body robot project from the TAs who had worked on it. As we have to complete a course with the ZJU students, suggested by the professor, we were given the Rhino CADing course. And suddenly, all our faces fell. The classes were on Saturdays and Sundays. Our weekends were suddenly booked. The only consolation, which kept us going though, was that it would be over by mid-June. And all of us would have gained experienced in a software, which not a lot of people in our pillar would be acquitted with.

All in all, it was a fun and eventful week, and though we hadn’t worked on the project yet, we were all looking forward to it and knew that slowly and steadily time would be given more and more to the project.

And, there! We’ve reached the end of this week my fellow adventurers! Go get your fill of life outside this blog! But be sure to come back, because there’s loads more in store!!!