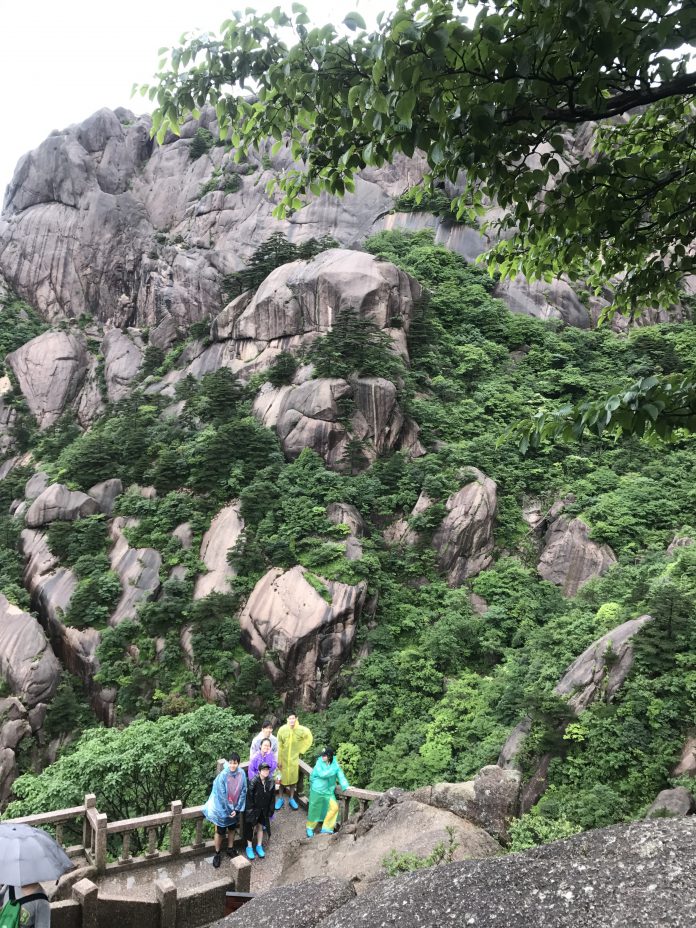 Huangshan ( 黄山 ) is a mountain range in southern Anhui Province in eastern China. The area is well known for its scenery, sunsets, peculiarly-shaped granite peaks, Huangshan pine trees, hot springs, winter snow, and views of the clouds from above. Huangshan is a frequent subject of traditional Chinese paintings and literature, as well as modern photography. It is a UNESCO World Heritage Site, and one of China’s major tourist destinations. – Wikipedia

Yup, that’s where I went this weekend! I went in  a group of 8 and we were at Huangshan for 2 days and 1 night. On Thursday evening, we set off from ZJU and took a 4 hour bus ride from Hangzhou 西站 to Huangshan city where we stayed for the night. The next morning we set off at 6am,  taking another bus ride to the foot of Huangshan. There, we had to pay the entrance fee of 230 RMB (half price for students). From there, we had the options of either taking the cable car(90 RMB)  to somewhere around the halfway point of the mountain or to start walking right from the bottom. We were feeling adventurous and up for a challenge so we gave the cable car a miss.

However, the weather was not in our favour. Thirty minutes into the climb,  it started to pour and it the rain persisted for essentially the entire day.  We still continued on our initially planned route up the mountain(indicated in the photo above), where our end goal was to reach Bright Summit Peak（光明顶）, the peak that our pre-booked accommodation was located. Our route also had a slight detour up Celestial Peak(天都峰) which, in my opinion, was the most challenging climb up! The stairs up were rather steep and the really strong winds did not make it any easier.

We managed to get almost no photos up Celestial Peak as the rain and wind was really strong and the risk of dropping our phones off the mountain sides was very real! Nevertheless, the view at the peak was stunning! The views got better when we went up the Bright Summit Peak as the skies began to clear and we reached the hostel at around 5pm.  On the second day we continued walking and later took the cable car down the mountain in the afternoon. This trip was definitely worth the effort! Although the weather was not perfect, it was very rewarding to see the beautiful scenery. At some points of the climb we were literally “walking in the clouds” and that was the best experience for me!