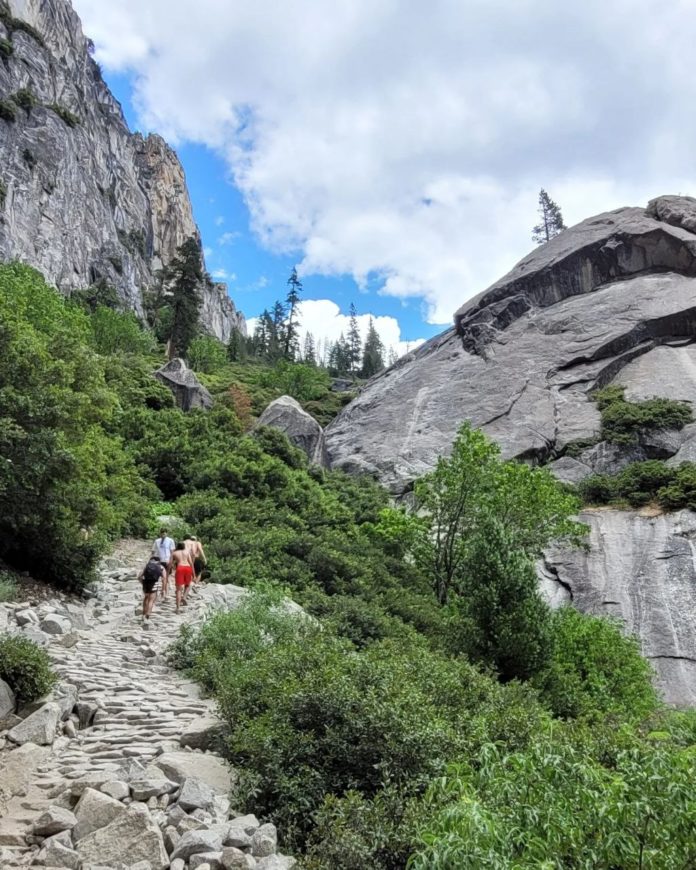 For our weekend getaway, our group went to Yosemite and Jamestown, of which the latter is the place we stayed which has a bus that takes us into Yosemite National Park which cost 30 USD round trip(might seem a lot but most things in California are already expensive to begin with.)

Before we made our way to Yosemite, we bought some cheap pizzas in Jamestown to go, so we would not need to purchase food in Yosemite, where prices are hiked up.

The bus ride up to Yosemite is exciting as you could slowly see more and more of Yosemite, as well as the roads being winding and rather precarious as there aren’t any barricades for vehicles, and you could see the steep drop down from hundreds of feet above.

Once we got off the bus, we were greeted with a magnificent view of Yosemite Falls and the various luscious trees. Surprisingly enough, Yosemite was not nearly as cold as Berkeley, quite the contrary, in fact, it was rocking a 31-degree Celcius temperature. However, it still does not feel remotely as hot as Singapore despite the strong sun rays. I highly recommend decking yourself out with sunscreen, a cap, and some spare change of clothes if you plan to have a dip in the falls or go on long hikes.

Full of excitement, we tried to rent some boats to canoe but sadly they weren’t up for rental due to low water levels. Instead, we moved on to our next plan, which was to hike up Yosemite Falls Trail. What’s amazing about this trail is that it is one of Yosemite’s oldest historic trails, and it leads to the top of North America’s tallest waterfall, which rises 2,425 feet above the Valley floor. The path is a steep and rocky one, be sure to take your time and pack up loads of water and some food for your tiring yet rewarding journey up the waterfall. We fell down loads of times, as the sand, gravel, and water make the path more slippery than it appears, so do be careful trekking up the mountain. 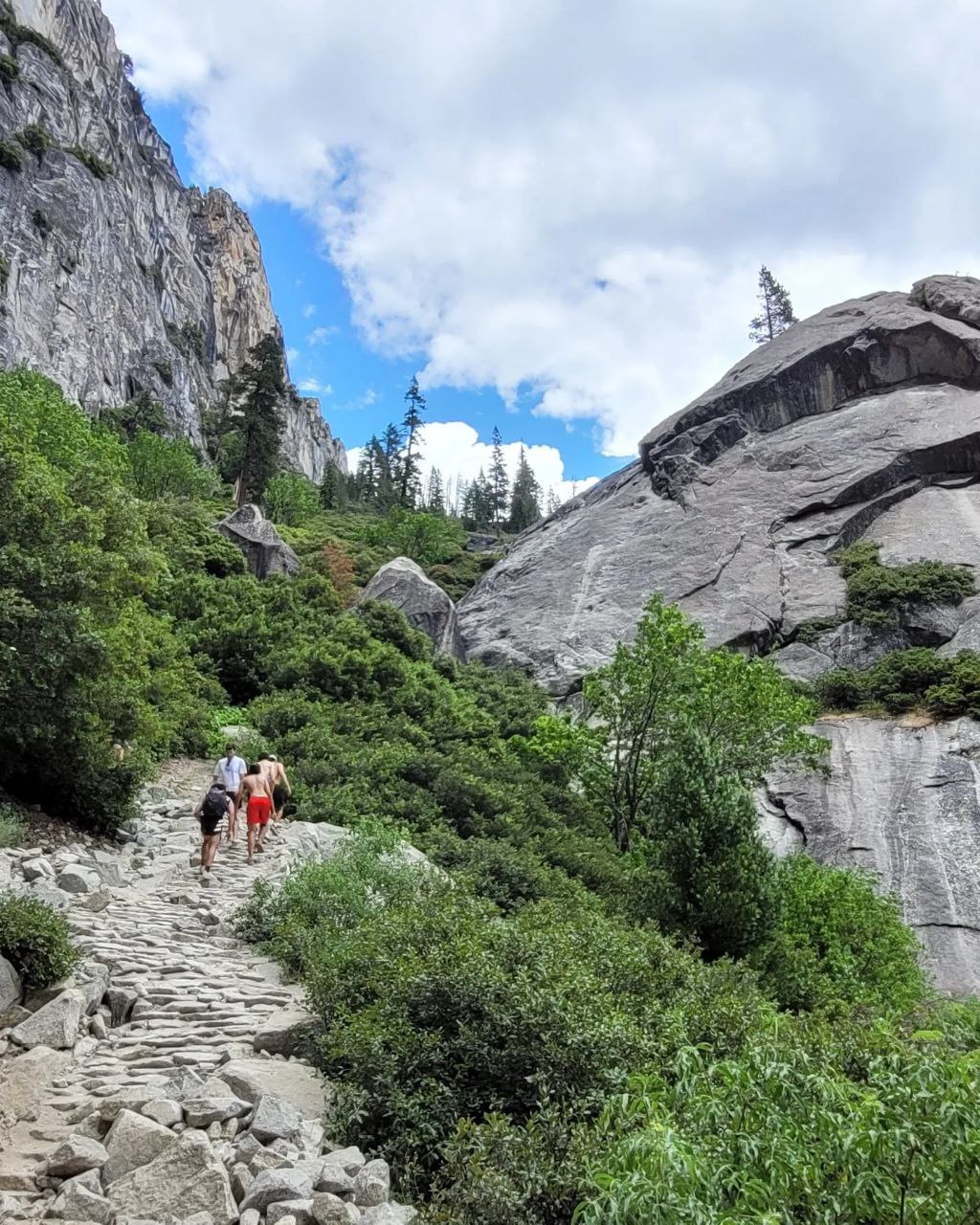 With pizza in hand, we slowly made our way up the fall and had plenty of interaction with other hikers there. It was really easy to strike a conversation with other hikers, as it is not every day you see somebody crazy enough to be carrying a box of pizza up 2,435 feet above the ground. 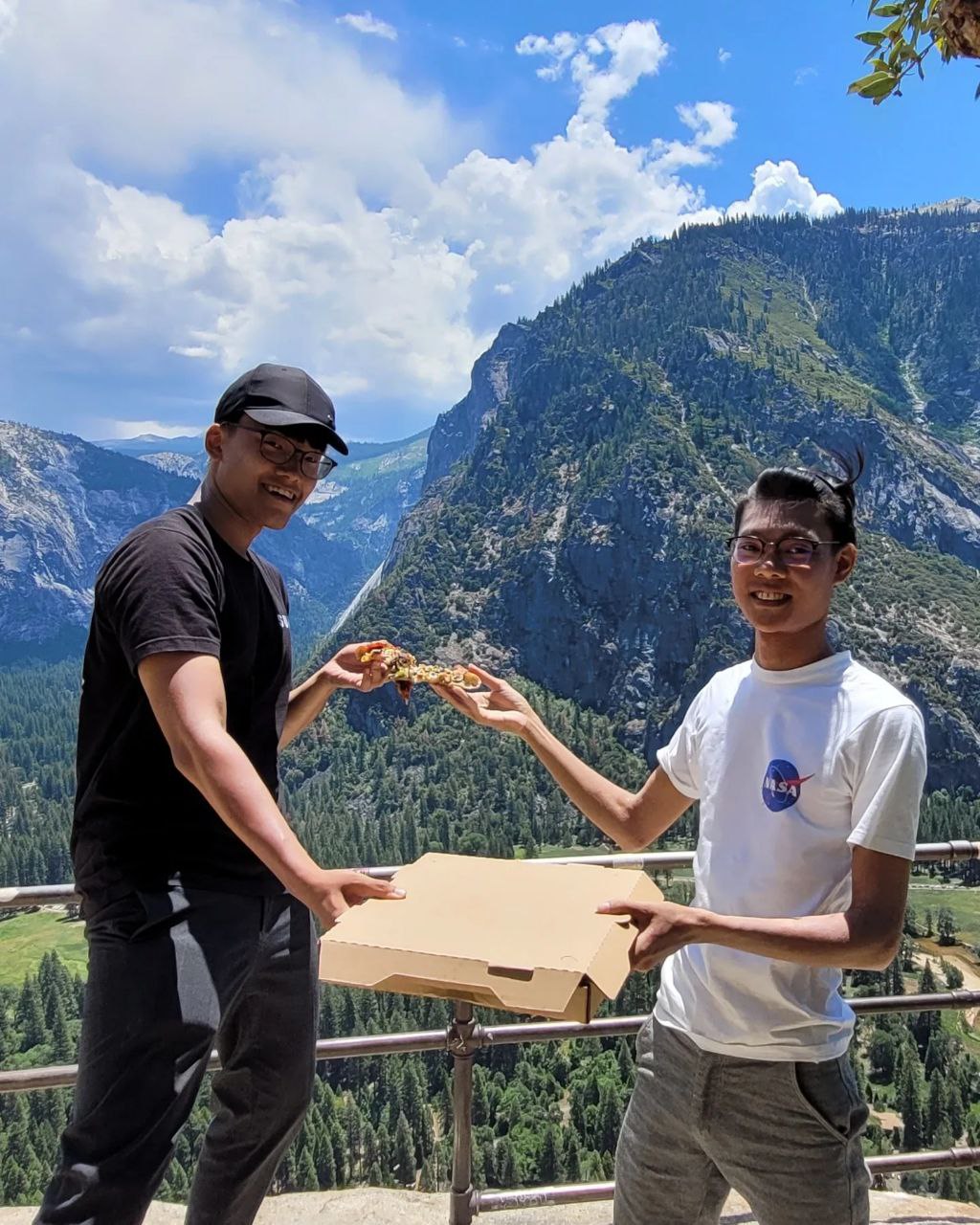 At the halfway point, we took a break to drink up and…pizza time! We ate and drank up while chilling at the edge of the cliff.

We then continued to make our way up, with another hour or 2, we finally made it to the top of the falls.

We then made our way down, which felt harder than the way up due to how slippery the trail is. We fell down many times and thankfully sustained no injuries. Before the day ends, we went to have a dip under Yosemite Falls, which was full of rocks of various sizes that we have to climb or jump over, which in itself is already a fun experience. Despite the hot temperature, the water is really cold, so don’t go jumping into the pool from the start!

Before going back to Berkeley, we had a tour around Jamestown – the place we stayed in. The best part of Jamestown is the aesthetic, the place really makes you feel like you are in the wild west. And I am not just talking about the desert-like feels of the place and the various cowboy films shot in this place, this place is also searing hot, a whopping 41-degree Celcius! We took a free tour around its historic site, where we were shown the various trains and tools used in the past.

Overall, the whole experience has been highly rewarding and fun! Yosemite is a must-visit for all who are attending the Berkeley Summer Sessions, and even those going to Stanford.