In just one week, we visited Hushu Special School twice to conduct activities for the students.

For the second student, he was accompanied by his grandmother who shared the student’s story to me. He used to be able to talk and dance but his condition deteriorated. Now, he could not even place his hands flat on the table, raise his arms or produce any sound. He would always be looking at one side and when his grandmother asked him to speak, I could actually see that he wants to speak but no sound simply comes out. Also, hearing all these from his grandmother, I could feel her helplessness yet her hope for her grandson’s condition to improve. She was very happy when her grandson attempted to smile at me. I personally am very impressed by her patience and care for her grandson. I hope the best for her and her grandson.

Some funny moments during the session were Keng teaching the students how to ‘da bu’ (dab pose) and Jia Wei being called 男的姐姐 by a student because of his long hair.

On Friday, 四到九年级 students joined us for the dance session. Wesson, Kenji and Timo lead the class for 海草 dance (choreographed by our own dance people). It was very fun and I saw most students were interested in learning the dance.

We ended early and had impromptu talent show by Kenji, Timo and Marcus who performed wushu, latin dance and singing respectively. 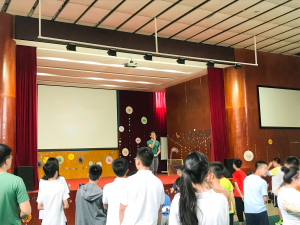