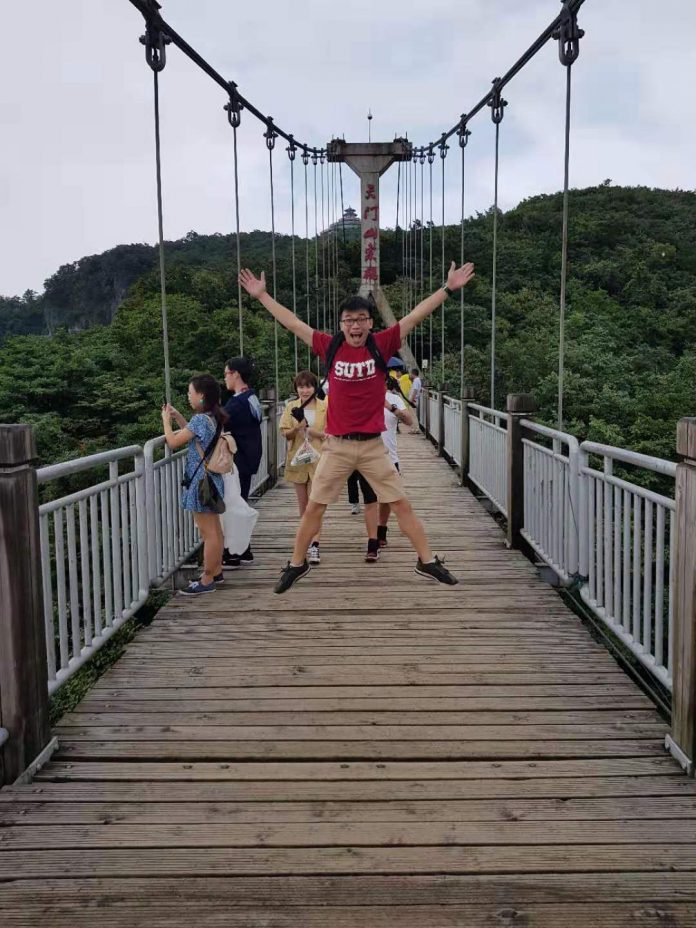 Journey to the land of Avatar

Never have i ever gone on a train ride of more than 4 hours. However, the trip to Zhang Jia Jie (张家界) required an overnight train ride that would take 14 hours followed by a transit train ride of 5 hours! This is because Zhang Jia Jie sits about 1000km west of HangZhou city and is in the inland province of Hunan (湖南).

Upon reaching the HangZhou Dong Station, we boarded the sleeper train that had beds in each carriage.  Having booked the soft sleeper beds, it was a compartment that consisted of 6 beds. I was extremely excited because i have not experienced anything like this before! Though the train ride was filled with occasional cries of babies and chatter amongst other passengers, the trip was still very smooth. The bed was surprisingly comfortable and we all had a good rest!

Arrival at the transit town of Yi Yang (益阳)

After 14 hours of train ride, it was time for us to stretch our legs a little. The sleezy and cozy town of Yi Yang had shopping malls and even an Olympic Park. We went to Wanda Plaza for locally-handmade dumplings as well as noodles. Next up was eating the iconic Mango dessert that capped off an excellent and delicious lunch meal!

5 hours later, Zhang Jia Jie is finally in our sights! Home to the UNESCO labelled and highly renowned Zhang Jia Jie National Forest Park, this city is a land of wonders. Not only is it internationally recognized, the area is also labelled 5A, the highest rating of a landmark in China. Furthermore to the south of the city lies another 5A attraction, Tianmen Mountain National Park. With two extremely iconic nature reserves and being a nature fanatic myself, this was a city of paradise!

Our home at 小印农家乐 inn

After one complete day of travelling, we finally settled down at the inn of 小印农家乐 which was situated just beside the mountains. Away from the village and busy city life, the inn was a place of peace and tranquility. We could get an excellent view of the sunset as well as be directly beside nature.

Standing just beside the inn are numeral rock formation that date back 220 million years ago. These ancient monoliths are what make this nature reserve unique from other areas in the world. With a breathtaking view of the area, it was time to get some rest for the next day of the adventure!

Venturing into the land of wonders

The morning thick fog and clouds covered the peaks of the monoliths. Though it was cooling at the base of the mountain, the weather quickly changed as the altitude rose. Even so, that did not deter us from walking up the nature and jungle tracks. The first route was the southwest route of 大岩屋 which directly translates to Big Rock House.

While trekking up the route, we were greeted by huge boulders to our left and right. The boulders were created due to the effect of physical and chemical weathering over the millions of years. As rain water seeped through the cracks, this caused the boulders’ vertical cracks to widen. At these areas, plants and small scrubs could grow to further erode the boulder with their roots. Some of the boulders are given specific names such as 罗汉迎宾 because of the appearance as well as their location in the route.

Along the way, the local guardians of the land, Rhesus Macaque Monkeys, were seen hopping from tree to tree. Thought they may look cute and harmful from afar, they are actually very curious and aggressive in reality. Many tourists who want to get closer to these animals tend to give them fruits and candy. However, this is extremely ill-advisable because the monkeys will rely heavily on humans for food instead. Thus, they do not hunt naturally for their own meal but may also scavenge the dustbins for food. This may cause them to ingest harmful plastic wrappings as well as pollute the environment.

Nevertheless, we were lucky when a curious monkey got close to us (probably hoping we had food). After snapping a few photos, we continued our journey up the trail of the mountain. At different viewpoints, popping out of the clouds are “stacks” and “pillars” of rock covered sparsely with vegetation. Not only was the view overwhelming, but it was as if we were in the jungles that millions of years ago.

Those who have watched the blockbuster film Avatar would definitely be familiar with the iconic Hallelujah Mountains. But where did this inspiration for such a enviroinment come from? Yes, you guessed it! It is from the sandstone landforms of the one and only Zhang Jia Jie National Park. Standing at 350m high, there are over 3000 sandstone pillars within the 18km by 18km nature reserve!

The iconic Southern Sky Column is the main source of inspiration for the film. After the success of the Avatar movie, the column has been renamed “Avatar Hallelujah Mountain”.

The reserve goes one step further to ensure tourists get even closer to the nature wonders, that is, by building numeral cliffside walkways. These walkways are definitely not for the faint-hearted or those scared of heights (like me!). Some of the cliffside viewpoints stretch all the way to the edge of the rocks where below us would be sheer drops of 200 meters. However, this provides a panoramic view of the mountains and pillars ahead without any form of blockage.

Besides sandstone pillars, there are also rare landforms like arch and bridges. One renowned landform is The First Bridge In The World, 天下第一桥. A natural bridge that is just 5m wide and 50m long, it links one main pillar stack to a smaller one. At the small pillar stack, you can pose at the viewpoint or tie red good luck ribbons to trees! Though there were definitely no blue aliens or any sign of the Na’vi, the excellent view of the whole area was extremely satisfying.

Scenic route through the valley

After getting a bird’s eye view of the valley from above, it was time to go back to slightly lower ground. The scenic path we next took brought us on a trail along the valley. Each sandstone pillar or stack that we passed by all had their own respective names. This is because some of them look physically like certain objects, for example a whip or a candle. Other pillars had deeper meanings due to the resemblance to certain actions such as a scholar putting a book into a bookshelf. Notable pillars include Golden Whip and Old Man Picking Herbs.

The Golden Whip river that flowed alongside us gave out mist making look like it was straight out of a fairy-tale. Not only was the water crystal-clear, there was a natural pool called Zi Cao Pond (紫草潭). This pond was used by villagers during the Qing Dynasty to rinse hand made paper (papyrus). The pond itself is an astonishing 5m deep, 3m wide and 10m long, formed by the scouring of flowing water with the  purple and red sandstone.

Cable car through the pillars

For us to get down from the mountains was either via walking or through a cable-car ride. After walking almost 30000 steps for the day, we choose the latter without hesitation. Going down the cable car ride was like a time machine. Cutting through the peak forests in between the sandstone pillars was like passing through a forest in the Jurassic Age. As we passed by each sandstone pillar, these majestic giants constantly put us in awe. Not only were they extremely grand but also made us further appreciate the fact that they have stood at this exact same spot for 220 million years.

With Zhang Jia Jie National Park covered, we decided to venture down south to Tian Men Shan National Park. The name was given to this mountain because of the 135m hole that cuts through it. The hole resembles a pathway to heaven hence the name Tian Men (天门).

At the base of the “gate” (ie the hole) are exactly 999 steps that provide a path upwards to the gate. Given the sheer number of steps, a specially constructed escalator was built for those who wanted to take a shortcut!

At the top of the stairs is another escalator that cuts through the mountain to bring tourists to the top. Similar to Zhang Jia Jie, Tian Men Shan boasts its own cliff-side walks. However, these cliff-side routes are build on near vertical cliff faces with just a railing separating the path and the valley below. With a tinge of fog and clouds, the scenery looks as if we are walking on clouds. The peaks of nearby mountains protruding out of the clouds make the whole area even more majestic and overwhelming!

Glass bridges to cure my fear of heights!

Just when i thought that the cliff-side routes were dizzying enough, there came the glass bridge routes. Though made of reinforced glass, the ability to still see 300 meters down below will make your heart skip a beat. However, i managed to garner up my courage and take a stroll down the amazing route. Somehow, i did not feel nervous at all because i was taken by awe of the view around and below me. Even walking to the edge of the railing did not scare me at all!

Not only was this trip memorable in terms of the travelling experience and scenery, it also made me explore a lot of new things. The journey made me come out of my comfort zone and also overcome my perpetual fear of heights! By far, this has been the most exciting, awesome and satisfying trip of my life to date!