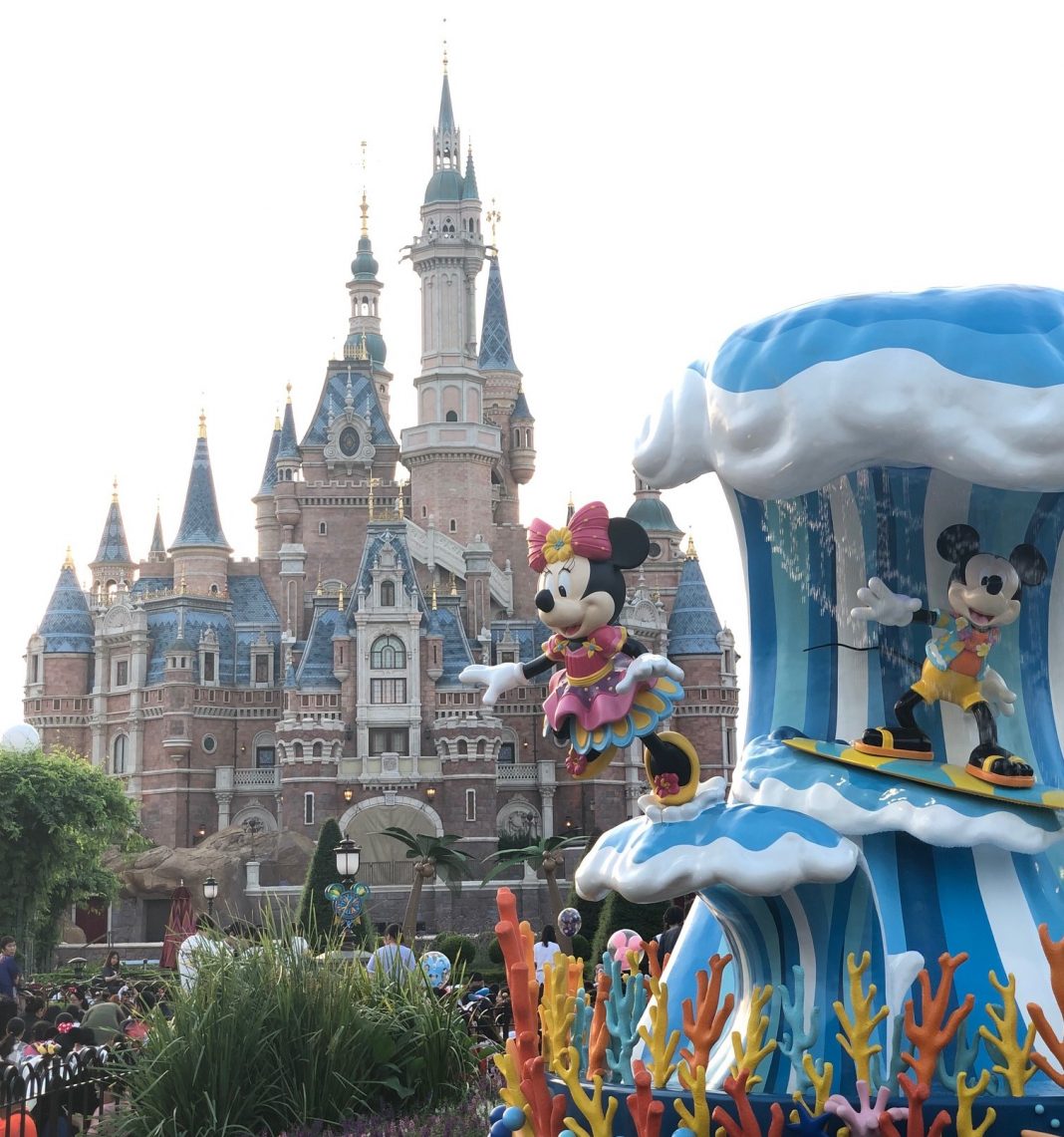 It was a cold and rainy morning as we set off on our trip to the museums. 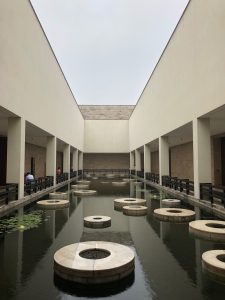 Liangzhu Museum 良渚博物院 is an archaeological museum dedicated to the Neolithic Liangzhu culture.

It houses a collection of artifacts from the archaeological culture, also known as the Jade culture (3000 BC) and is located in Liangzhu, in the northwestern outskirts of Hangzhou. Designed by David Chipperfield Architects, the interior is pristine and simple, and the spaces in-between halls are decorated with symmetrically-pleasing pillars, fish ponds and courtyards covered in lush greenery. The building is set on an artificial lake and connected to the park via bridges. The lake is artificial and was actively integrated into the scheme. 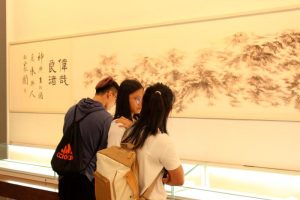 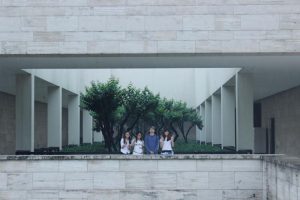 Liangzhu Culture and Art Center良渚文化艺术中心 was designed by Tadao Ando. 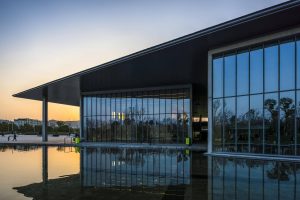 It houses various facilities, such as halls, galleries, classrooms and a comfortable and serene library. In addition, cherry trees were planted between the water court and the river, allowing the building to stand quietly in nature. In order to blend into the surrounding environment, echoing the slope of the large roof, the south side of the landscape forms a garden with undulating and triangular geometry. The designers have preserved the beauty of the landscape and fused it with modern architectures, forming an integrated and elegant space.

Mei Li Zhou Church 美丽洲教堂 was not only created for religious services, but as both a spiritual and community retreat for all of the surrounding community regardless of religious beliefs. 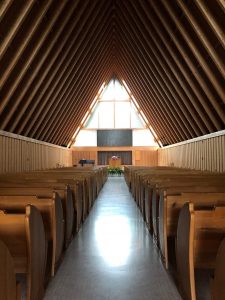 The design incorporates both architecture and nature. Its simple yet vast interior space and open facades allow natural lighting into the building. Along with beautiful and tall trees surrounding the space, the two large openings at the front and rear of the chapel and a series of large vertical skylights, they all combine to create a calming and ephemeral feeling within the church. 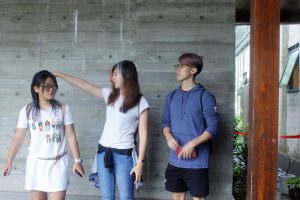 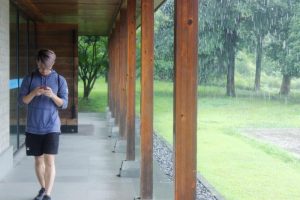 The architectural design of the entire Xixi Wetlands Museum 西溪湿地博物馆 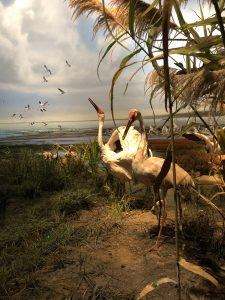 at used to roam the various wetlands in China, historical gallery of how Xixi wetland was developed and conserved, the ancient lifestyle of the local villagers, as well as an array of magnificent artworks made by students, from as young as 5 years old to university students. 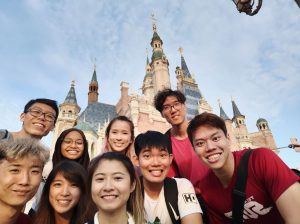 Although the weather forecasts have been warning us that the whole day was going to be raining, we were very lucky that on the day itself it didn’t rain at all! It was even probably the best weather to be out enjoying theme parks, and so we quickly packed our bags, grabbed a quick bite and took the metro to Disneyland Park station in Pudong. Upon entering the park, we instantly felt the magical atmosphere as our childhood memories of Disney were realised – it was literally a dream come true! The park covers an area of 3.9 square km and has seven themed areas: Mickey Avenue, Gardens of Imagination, Fantasyland, Treasure Cove, Adventure Isle, Tomorrowland, and Toy Story Land. The weekend ticket is priced at 575 yuan on weekends and 399 yuan on weekdays. I will share my experience of some of the rides that we took. 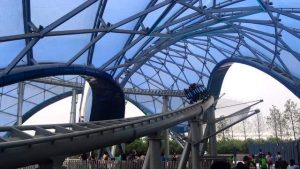 TRON Lightcycle Power Run is an indoor roller coaster, where visitors get to ride on a motorcycle like the characters in TRON. Despite being not very fast in terms of speed and the lack of high and steep falls, it was still very enjoyable and definitely suitable for families. However, the queue time was around 90 minutes so I would suggest taking this ride at night time (the waiting time became a ridiculous 15 minutes at 9.30pm). 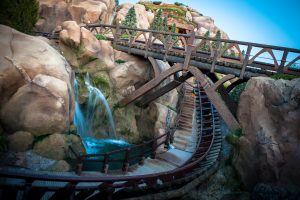 Another family-friendly roller coaster is the Seven Dwarves Mine Train, featuring both indoor and outdoor sections. The setting is mesmerizing and mimics the movie perfectly.

I suggest taking this ride at night as well to avoid unnecessarily long queue. 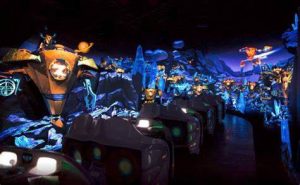 score the highest point by shooting laser beams at targets. We didn’t know how the scoring system works and ended up achieving around 10000 points each – top scorers actually have over a million points! It was fun nevertheless and worth the shorter 30 minutes waiting time.

Rex’s Racer is basically a toned-down version of Vikings, and it was only 4 cycles per ride with the highest point being 90 degrees from the normal to the ground. Funny thing though, it was the ride where we screamed the most but honestly it was not worth the wait. 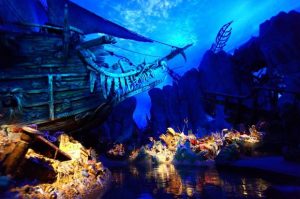 Pirates of the Caribbean: Battle for the Sunken Treasure is an awesome boat ride that lets guests ride magnetically propelled boats and travel past audio-animatronic and projected depictions of Jack Sparrow and Davy Jones as the two battle against each other in attempt to seize the cove’s sunken riches. 10/10 recommended, partly due to the super fast 15 minutes queue.

I highly encourage you to watch the street parade, where our beloved Disney characters come to life with familiar Disney songs, dancing people in costumes and beautifully-decorated massive parade cars. 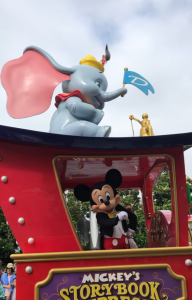 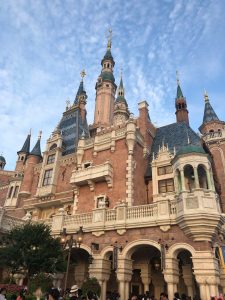 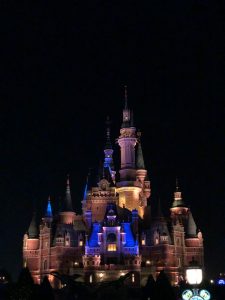 The Fountain and Light show at the Enchanted Storybook Castle 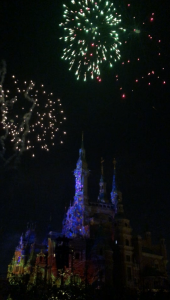 at 8.30pm is also a must-see, featuring fireworks, water fountains, fire, lasers, projection  mapping, and searchlights. The show’s story is centered on Mickey Mouse flying through the evening sky after discovering a magical spark that ignites his imagination.

The food there are rather expensive (around 80-100 yuan for one full meal) so I suggest you have a hearty breakfast that can last you until night time if you want to save money!

Do download the Disneyland Resort App beforehand to book tickets, check the rides waiting time, parade and shows schedules, and other useful info.