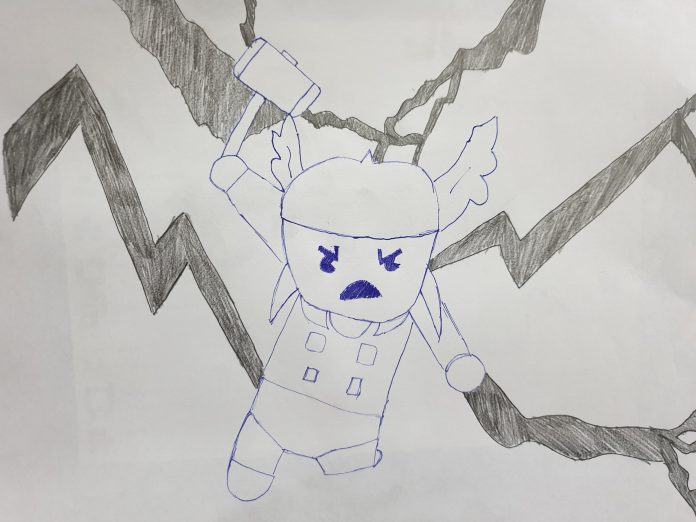 Round two of Design Fiction is here! This week, we were tasked to further hone our imagination skills by creating a mini-movie. The professor first gave us a warm up exercise which was to draw out our own perspective of futuristic interactions. These interactions included how healthcare and socialization would be integrated in a futuristic environment. For example, in the healthcare portion, future individuals were to be taken care of by robotic drones and sensors. Moreover, they can be treated without the aid of external nurses or doctors.

Recounting last week’s topic which was on “How to make Toast?”, we were now required to incorporate futuristic theme’s and imagination to recreate the scene. Our group chose to use Thor as our main character who is upset that his bread is not toasted. As such, he is angry and thus uses electricity from his hammer to ensure that all bread are now definitely toasted.

Some ideas from the other groups included toast growing directly off trees with bread crumbs as seeds instead. Another interesting story-line was that a bread went for a suntan and hence became toasted! Everyone had a lot of laughs and would be looking forward to next week’s lesson!

DIP was a huge event for the seniors studying at ZJU. Similar to capstone projects in SUTD, DIP was a project to showcase persisting problems in society and how to better mitigate and tackle them.

Some of our students from the DATE@ZJU programme were involved in the projects. This included working with them to film and do first hand user research. The topics they tackled included road safety, origami robots and sleep cycle just to name a few. Not only were the presentations on stage top-class, the prototypes created were also impressive. One particular prototype was the Almot. It was a smart helmet that incorporated rear sensors to give the driver a 360 degree view of their surroundings. Given that many drivers use their phone on the road, this invention would greatly curb the number of road accidents. All in all, ideas from all groups were innovative and feasible. We were all very proud that our friends represented SUTD on the big stage!