We had our last lesson studying other professional videos and showcases of products where they filmed it nicely in a way for the audience’s imagination to flow. We basically combined all the skills we learnt from the past 3 weeks of lessons where we had to do a 3 minutes video with the theme, the future of robots using our origami robots from the first module. We showcased the idea where robotic animals are created in the future due to extinction. However, the robotic animal became so smart, it soon realised the danger of earth and decides to vacate earth. It was an interesting course where we put our imagination to the test and tried various editing skills to showcase our ideas. Although the ideas might seem too ridiculous at first but it was more about practicing the skills and attempting to give a different view from the original product or idea.

Our group split into two where we settled upon 2 ideas, a toy to teach children time management which has not yet been finalised and a smart reminder help young busy working adults remember daily essentials as well as their daily agendas. On top of that, it has a calendar home screen which also tells the weather and temperature. It is connected to a mobile application which can be shared amongst your family members. Given the context that many of the working adults do not stay near their family members, the smart reminder can also be updated by family members elsewhere to give concerns like ‘Remember to wear more clothing as winter is coming’ from a mother to her working son in another city. Such features are not extremely costly or difficult technically to add but it does help to have additional intrinsic value as simple passive concerns are more effective than long active conversations. We also faced with issues such as the difference between this and a smart speaker or smartphone application. We base ourselves as a cheaper alternative with the sole intention to remind users of their daily essentials. It will cost almost the same as just a simple furniture to keep hold of your items. However, we have additional useful information that can help the users to start his day well by providing the day’s weather and temperature, agendas list and heartwarming reminder messages from family and friends. It is just a simple screen that has no additional gimmicks such as telling you jokes or helping you to order food. Through this, we hope that it serves a more meaningful purpose in the longer term than having multiple non-utilised functions. 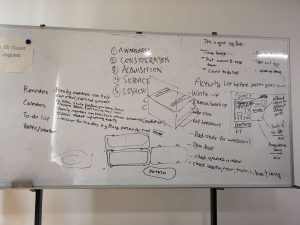 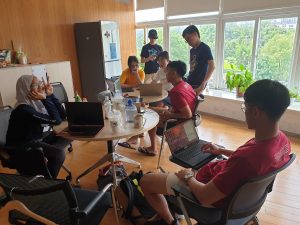 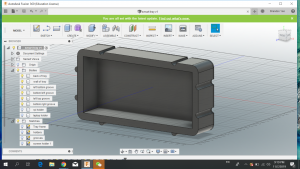 Our first CAD for the prototype