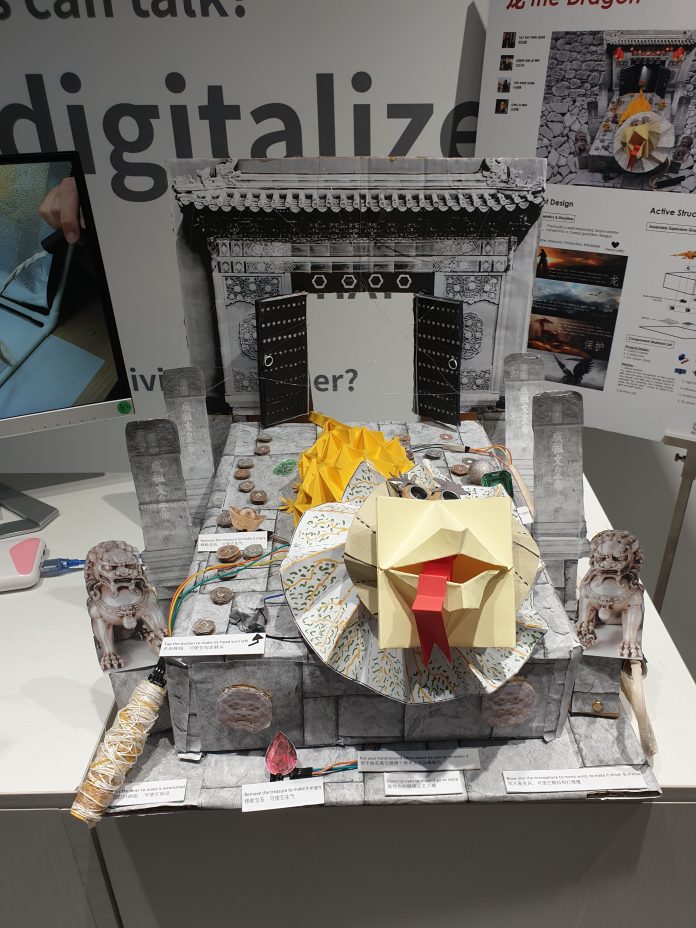 The last part of design fiction is on the topic of “Future Robots”. A recap on the previous 3 sessions, they were on giving a story line to fictional characters. Similarly, this final project would depict how robots will exist in a futuristic environment. Utilizing the origami robots previously, we chose Long the Dragon to be our main character.

The story line is as such: Long the Dragon was still guarding ancient treasures despite it being in the year 3019. As a professional, he has shunned off countless thieves but was ultimately getting bored and annoyed by all the stealing attempts. One day, a mad scientist approached and asked if Long wanted have a better life. Long agreed without hesitation but in order for success to come by, he had to train very hard for it.

And so, the training commenced and after months of toil and sweat, Long evolved to become Birdy, a futuristic flying robot. Made out of carbon fiber and nanotechnology, Birdy was a force that should not be messed with. The new Long (now Birdy) was a police personnel and would fly over cities to ensure that the people are safe. If any crime were to occur, Birdy would always be the first at the scene of the crime.

Long has definitely come a long way from his boring job of protecting treasure. Being a futuristic robot that can fly and have his own freedom, Long was finally happy!

Following up from last week’s discussion session, we finalized on the 3 ideas that have the most potential out of the 10 that we chose. The 3 ideas are: 1. A smart dustbin that is able to help users tie their trash and replace the trash bag automatically. 2. A toy that teaches children how to better manage their time. 3. Device (calendar based) that reminds users of their to-do-list and essentials.

Refining in depth our 3 ideas.

After presenting our ideas to the TA, we found that the idea on the dustbin was not attractive. We eliminated the idea based on the following criteria: 1. Creativity and innovation. 2. Prototyping cost and complexity. 3. Market demand. 4. Unique value proposition. As such, the other two ideas were further refined and explored. I decided to further research and discuss with the group that was doing the to-do-list and essential reminders device.

As many individuals then to forget to bring out their essentials, creating a product that can address this problem is extremely helpful. Essentials include house keys, mobile phone, wallet and car keys. Our target audience is focused on families or young adults from 18 to 30 years of age. The screen would act as relay to broadcast the date, day and weather. In addition, reminders and the day’s agenda will be displayed to remind the individual what needs to done. Furthermore, the system will also provide “quote of the day” to motivate the user. If there are any essentials that are left behind, the system will voice to the user that he has forgotten something. This ensures that the user does not miss out important items for their day outside.

Creating something that is modular and intuitive would be the best product for the users. Not only would it be easy to use, but also customizable to suit the preference of the individual. As such, modular shelves would suit best as they can be arranged in different patterns to fit into the home environment. The screen would be on another platform that is also modular and can be placed anywhere. In addition, essentials will be placed inside these shelves which are respectively tagged to different users in the house.

The next stage of our project will be to build a prototype out of cardboard to see if any areas can be improved. Next, the sourcing of materials will be done before assembling the necessary components into a finalized product!