4th May batch to head off for Hangzhou

Setting off for Hangzhou for 14 weeks was definitely something I have been looking forward to – the excitement, the curiosity and the wonders of being in a different setting thrills me up with anticipation. The thought that I am away from my homeland, and heading to a foreign land, with a bunch of friends, it’s something that got me riled up to pack my bags and head off. The immersion to a whole different culture, the food, the social dynamics, the spaces, and most importantly the language, is something that I look forward to adapt and to adopt over time. Though having been to China a few times, I would at least know what to expect, however, this time around it is working with the people there that I am curious on how it is going to work out.

Landing in Hangzhou, nothing much happened on the first few days after landing. We have had all the standard procedures. Meeting up with the professors, traveling, administrative matters, all the usual things. We were directed to what we need to do and only had small personal recces on the ground. While exploring through the streets of the university, what intrigued me was the space the university is set in. It looks close to a large, cordoned off, private estate, with huge imposing housing units across the lands, and both private and franchised shops all spread far and wide across the university lands. It feels close to any “business as usual” streets along any streets of the city. We have not had the time to explore more of the school’s space, nor had a proper guided orientation around the ground, so the only spaces we have encountered are mostly housing units with ground-floored shops. The space already is on another end of the spectrum compared to our local SUTD space, maybe even different from our other local university NUS. Picture of a street in Zhejiang University, ground floor shops with high-rise apartments

Well inclusive of the whole cultural experience in ALP, what other thing intrigue Singaporeans more other than the local cuisine. It is always “what’s there to eat?” on everyone’s minds. The food is honestly scrumptious, most noodle soup has a tinge of spice that tickles the tongue, or the typical sweet and sour pork with the meat being really tender, or roasted pork belly with its smokiness trapped in each bite. Whew! All that was just the unassuming canteen food. The whole processing of canteen food is a different and efficient system compared to Singapore with each dish laid out on individual plates, and it’s and all round pick and choose. To think that mass production of food compromises the quality of taste, but in China that is not happening. 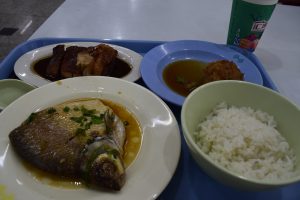 Look forward to what’s more that’s in stored for adventuring through Hangzhou and learning the ins and outs of Hangzhou! Thus far it’s something that has been enjoyable.