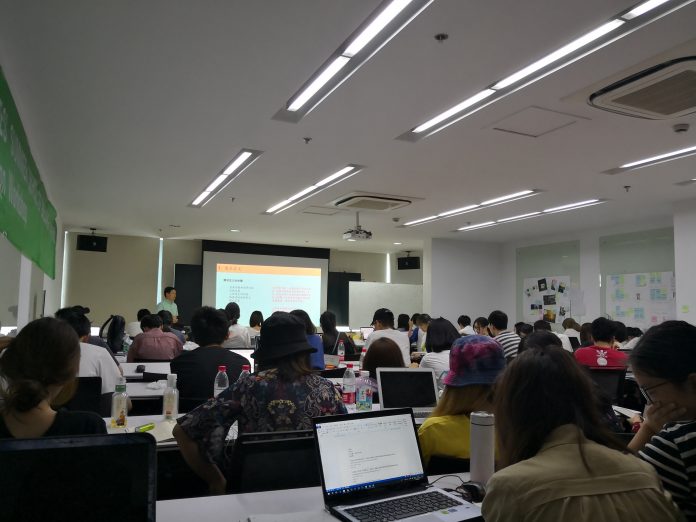 As you can tell from the title of this post, we recently began lessons in ZJU. First and foremost, lessons in ZJU are oddly similar to lessons in SUTD, which is not really what you would expect. For a school with 7 campuses and over 45000 enrolled full time students, the class sizes are oddly small. Every class ranges from about 20-40 students, which is almost identical to the class sizes you would expect in a Singapore school. The style of teaching is also the same, with a professor in the front of the class, giving a lecture style lesson. That being said, we have only attended 3 different classes, so the sample size is probably lacking.

The first class that we started with was taught by our theme mentor, Zhang KeJun, who taught a class called Information and Interaction Design Technology. This was about the aspects of design thinking in relation to creating or even advertising new technology. Our mentor stressed that there are always multiple ways of looking at a single product, be it in the eyes of us as developers, the target audience, or even in the perspective of the people who would eventually market and advertise the product.

The second lesson was one that was designed just for the ALP students, and is called Design Fiction, which focuses on the methods of creating and analysing the story behind a product. For this particular lesson, we were asked to quickly create sketches about how to make toast, which was a way to come up with creative stories about a relatively boring action. It was a unique method of allowing us to use our creativity to advertise something so mundane, and it ended up with really interesting results from the entire class.

We were actually given a choice between a few classes for our third lesson. We looked at the list together and eventually decided on one called Introduction to Scientific Computing which was about teaching students the basics of computation and data analysis through the use of MATLAB. The first lesson we attended in particular was about matrices and different methods of manipulating them. This was particularly interesting as MATLAB is a common tool used by the industries in Singapore especially in programming and visualisation environments, and so learning this skill would be extremely useful to most of us in the future.

Overall, the lessons in ZJU are fun and engaging, and hopefully we will be able to bring new knowledge and insight back to SUTD to share.