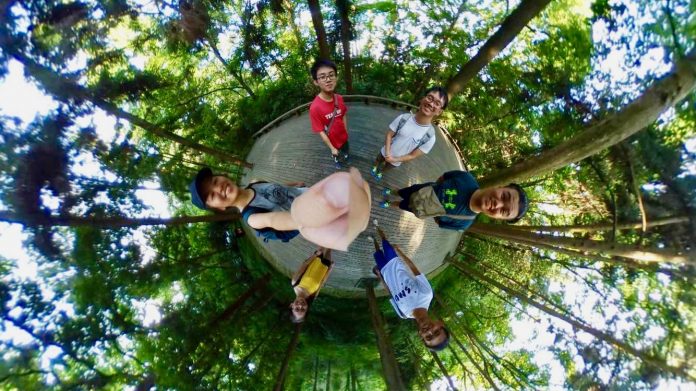 (kind of)
The past one week, if you have been following the blogs, we have been travelling and experiencing different parts of Hang Zhou. There hasn’t been any official lessons and some of our ALP students have yet to arrive ZJU too until this week. In a nutshell, this week was the official start of ALP with the official opening on Monday.
During the opening, the one thing that resonated with me the most was how there was a “keyword” for every batch of ALP students — they were Taobao, Alipay and Waimai for 2015, 2016 and 2017 respectively. The speaker posed us a challenge which is to find a “keyword” that defines ALP 2018. Judging from the “keywords” of previous years, it is obvious that the extensive use of technology and phone applications among customers for various services left a mark on SUTD students.
With ALP officially starting, classes started, we finally got the chance  to put a face to those names we see in our Theme’s We-Chat groups ( our other Theme mates, Professor and teacher assistants ) though several interactions and forge new friendships with our fellow Theme mates.

As mentioned in my previous week’s post, our fellow ALP friends shared with us about which parts of Hang Zhou they explored during buddy day. That sharing indeed gave us more breadth towards what we we can do in Hang Zhou. Because of it, my friends and I decided to visit that Umbrella Museum. While we were there, we were also able to see exhibitions of swords and scissors. At this point you must be wondering, what is there to know more about this objects, what is there to see? Did I just go to the museum to see a series of the above mentioned objects? Not really, turns out seemingly mundane objects like these have a story to tell.

Truth be told ( again ), I am not the biggest fan of museums especially when all the information were written in Chinese.(shoutout to my slowly-improving command of the language) This probably meant that the amount of knowledge i gained through all the exhibitions that day is just a mere fraction of what I could’ve understood if it were in English.

I would like to comprehensively share about what I really learned about these items that China hold rather dearly to their culture, but my knowledge are limited to :

This week was the first time meeting all our Theme mates from SUTD in China. And since we would be spending quite a lot of time with each other for the next 14 weeks on our project, we decided that this 14 week journey should not only be completing our project but also having fun with each other ourselves. What better way to break the ice than dinner followed by karaoke-ing? And that’s just what we did – spent two hours singing (shouting) songs rather shamelessly.
Another team outing we had was a hike. Despite the blistering hot sun Hang Zhou had, nothing much stopped us from wandering along 虎跑路 rather aimlessly while bantering( as we realised I keyed in the wrong destination on Amaps ) until we , by sheer luck and wandering , found a peak to hike towards which was a pagoda, 六和塔 in 虎跑公园. When we reach the peak, we saw the entire landscape of Hang Zhou, the high rise buildings, 西湖 and green spaces. Indeed, all those stairs we climbed leading up to that breathtaking view was worth it and the best part was there were no other tourists there, allowing us to enjoy the true peace and serenity that 西湖 or 北高峰 could not really offer as they are heavily marketed as tourist attractions.

On board with us on our ALP projects are also our professor and TAs whom we had our (official) team dinner and meeting with. During the meeting, we were instructed to start conducting background research online regarding out theme – Sleep Assist Light. To kick start the process of design which was to research, we had to do our market research on current lighting systems within China and out of China, types of sleeping disorders, different stages of a sleep cycle, how does light in terms of quantity and types affect our body and hence sleeping patterns, and so on. This design process rings a bell as it is pretty similar to how brainstorming for ideas worked in SUTD’s 3.007 Introduction to Design. Thanks to 3.007 we all had some common grounds when it comes to design thinking and at this stage, crafting a design problem. This eliminated the doubts towards the relevance of research process which most of us probably had when we embarked on our first Design project back in SUTD.

As mentioned, our first lesson started this week. In this week’s lessons, we learn about a method which can be implemented when we want to create a storyboard/ storyline of a product in use or a process we are trying to illustrate. To exercise this method, we were given a task to create a storyline on “ How to use a toaster”. To implement this method, we first had to illustrate the associations we had with toasts ( which was what our group of three did) on twenty pieces of paper and then rearrange it based on categories. From there we come up with a story line.
We were then supposed to present our stories to the class. And some groups really did put fiction in Design Fiction….

Paraphrasing what our ALP seniors advice us a lot : Take ALP as an opportunity to travel … like a lot during all the free time you have. And so after exhausting most of the places to go in Hang Zhou that appeal to us, my friends and I decided it was time to venture out of Hang Zhou to Su Zhou this weekend.
As I have dumped my laptop in Hang Zhou, this post shall end here and Su Zhou adventure or misadventure shall continue in next week’s post.
Click to rate this post!
[Total: 0 Average: 0]