Thanks to ZJU and Bank of Beijing, our theme had the chance to visit Nanjing during this recess week. Well, at least those that stayed behind during recess week (sorry Alex and Timothy HAHA) because it was pretty last minute. We were supposed to visit the Bank of Beijing but apparently it was closed for renovation or something so we had the entire 3D2N for ourselves to walk around Nanjing.

Straddled between Beijing and Shanghai lies the ancient capital of China (bet you didn’t know this that because I didn’t HAHAHA) for a few dynasties. Once we alighted from the train, we took the metro to our hotel near 夫子庙 (fu1zi3miao4) or the Confucius Temple. The metro ticket booth here dispenses these small little coins that you can use to tap in to the gantry. Jia-yee said that Malaysia does the same but suaku me obviously didn’t know this and was quite amazed by it. Not to mention the ticket costs like 2 yuan which would obviously make a very good souvenir (I wanted to buy one back but I know I would somehow lose it so).

We checked into our hotel, where I roomed with Edmund and Zhou Zhi. When we walked in, the room seemed very nice and cozy, until we realised that the toilet wall and door was made of glass (!!!) which made showering and doing our business slightly more awkward than usual HAHAHA besides that the room was really big and the TV also streams the world cup which was their nightly entertainment. I fell asleep rather early on both days (like really early – I kinda fell asleep at dinner both days) which was great considering how bad my sleep cycle was.

First stop was visiting the area near our hotel, which was the 秦淮河 (qin2huai3 (not zhun3 ok HAHA) he2) area and 夫子庙. We visited some place for lunch and it was there that I realised that I will not get used to the food here at Nanjing because everything was especially salty and weird. I ordered egg fried rice (more like salt fried rice – there were huge salt grains in it ugh) which was supposed to be more normal HAHA people here like to eat duck and innards and all which was totally not my thing.

Ok back to the sightseeing so I don’t sound too whiny. The river area was nice and surprisingly not packed with tourists. The sky was overcast (it rained for the next 2 days sadly) and added this filter to the photos which I love a lot HAHA we walked to 夫子庙 and realised we had to pay so cheapskate us just took photos outside. (more like I helped the girls take photos HAHA) So based on my limited knowledge the area was the place where people will come and take their national examinations so they can become officials. On hindsight maybe we should have went into 夫子庙 to pray for my GPA (sad reacts only).

Around the river area were people pulling rickshaws for a living. Obviously I asked for the price but didn’t take it because I’m a cheapskate HAHAHA they have other opportunities ok don’t blame me. We also saw a lot of stalls with overpriced food (this place is apparently an AAAAA sightseeing location) and selling stuff like the liquid nitrogen ice cream (I wanted to buy but yes I’m a cheapskate but you already know this), mango drinks (can you believe it actually costs 5SGD for some small drink), pastries (which looked pretty good) and smelly tofu (huge no from me HAHA).

For dinner, we visited this restaurant called 南京大牌档 (nan2jing1da4pai2dang4) and ate some really delicious food. The queue was insane (Singaporeans see queue must queue HAHAHA) and luckily we managed to get a number early. We ate dishes like 盐水鸭 (yan2shui3ya1) and this 桂花年糕 (gui4hua1nian2gao1) and it’s really really delicious! So like I mentioned I fell asleep before dinner and the others were nice to save me (only) one piece of duck (the audacity!!!) but yes it was really good but just a bit too salty (have I mentioned that already). After dinner we returned to the hotel (it started to rain at this point) and that concluded our first day.

So during the second day we visited the 南京大屠杀纪念馆 (nan2jing1da4tu2sha1ji4nian4 guan3) in the morning. This place was dedicated to the deceased of the Nanjing Massacre during the period where the Japanese invaded China. After having invaded Shanghai, they set their sights on Nanjing which was the capital then, and once they have successfully invaded, they killed a total of 300,000 people, looted the city and raped women as they liked in 6 weeks. It was a dark period for China and it pains me to see the images and descriptions in the museum. 10/10 will recommend this place to you guys. I can’t really describe how beautifully sad this place is its just photos of this place from here. 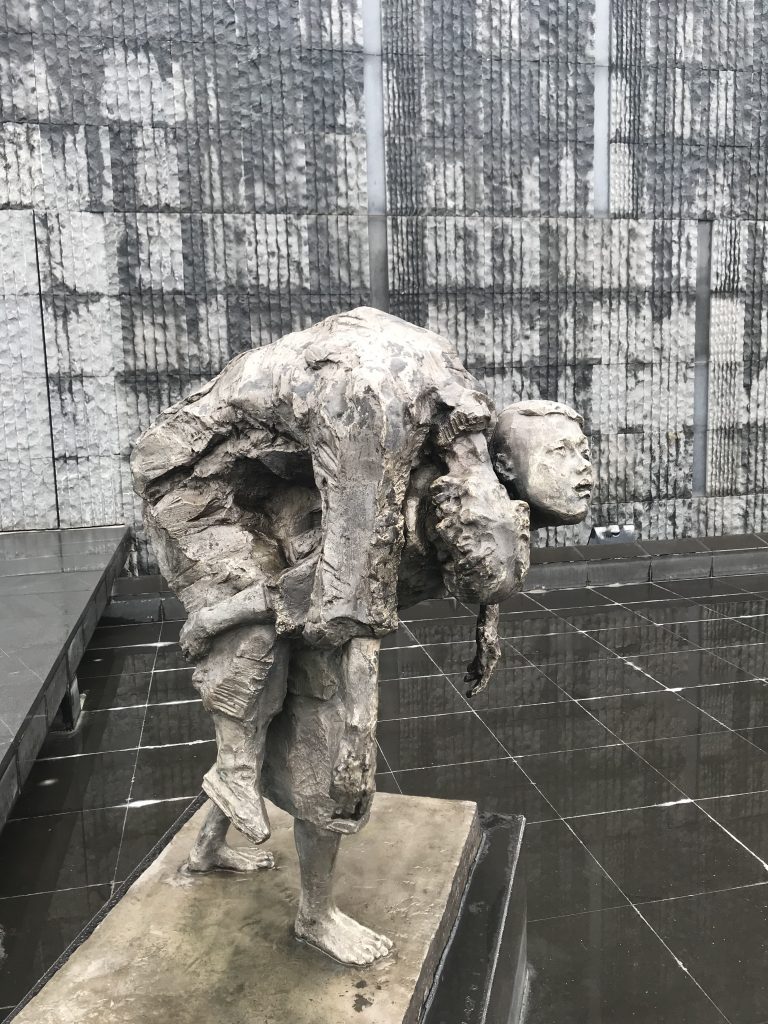 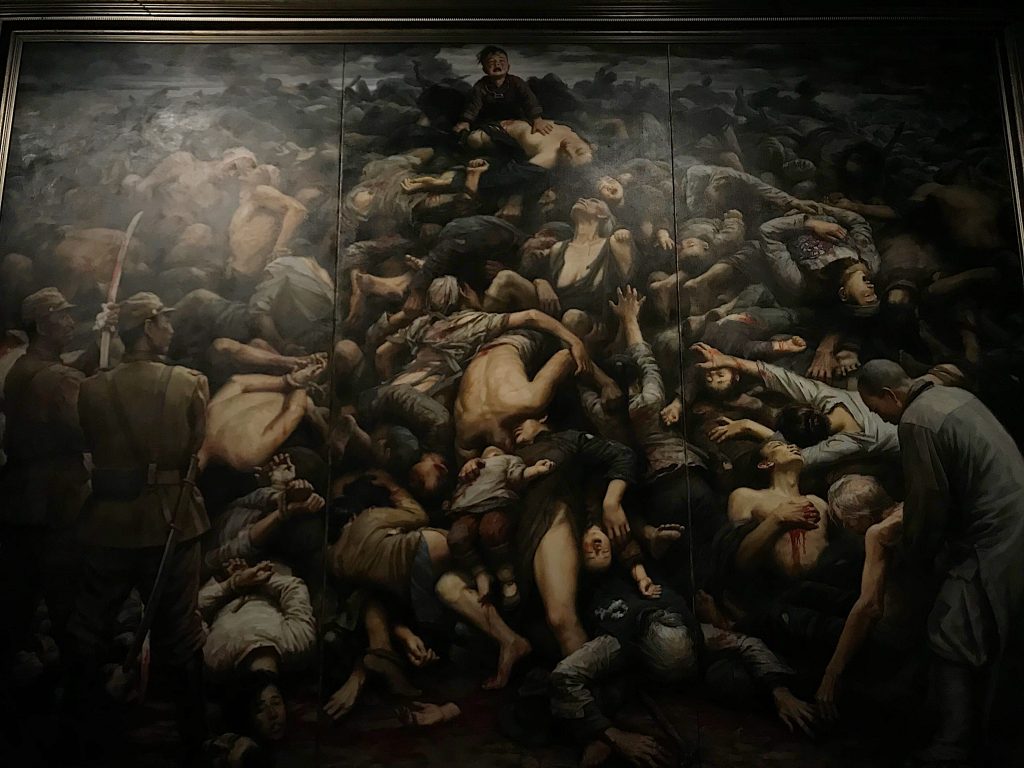 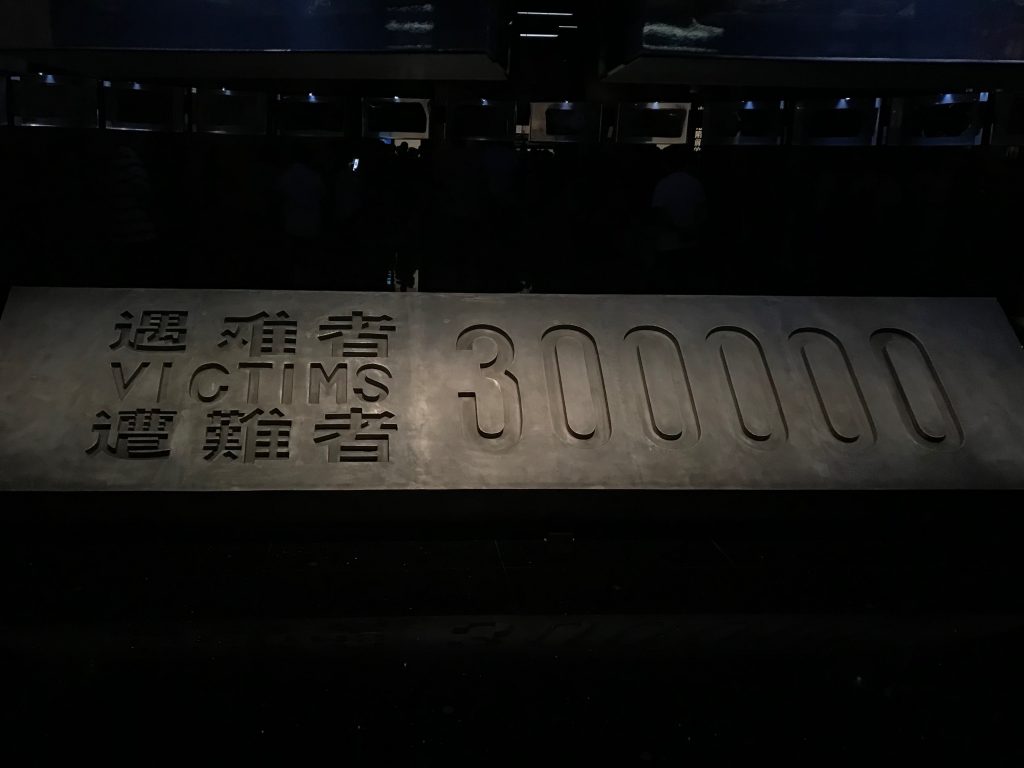 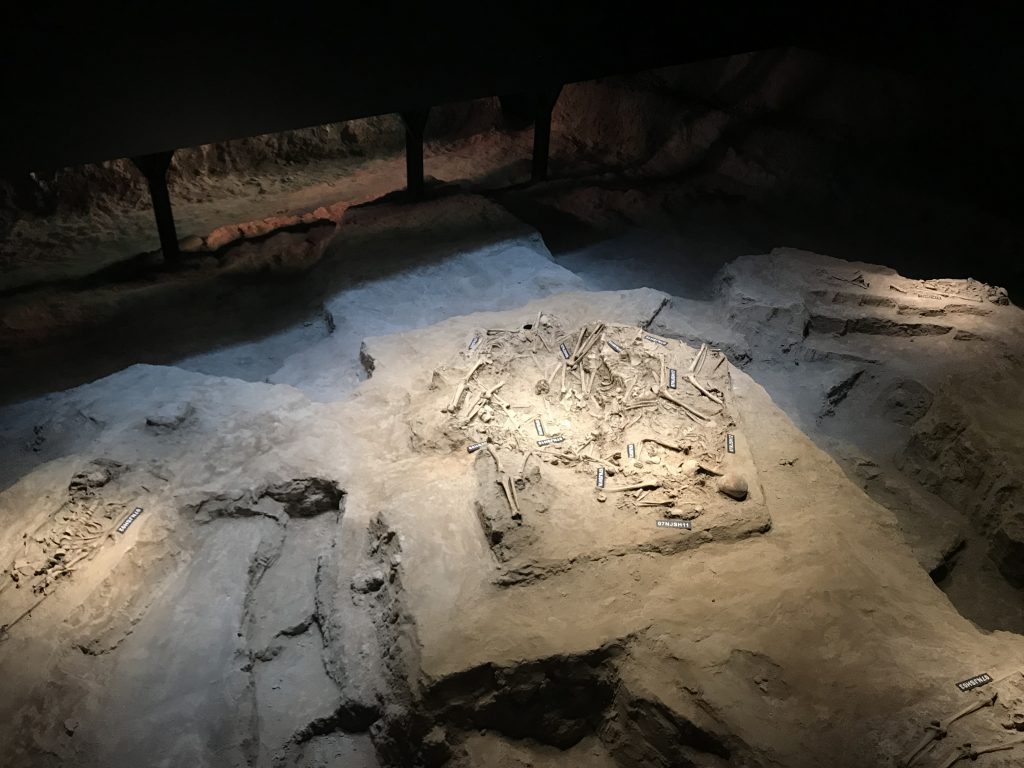 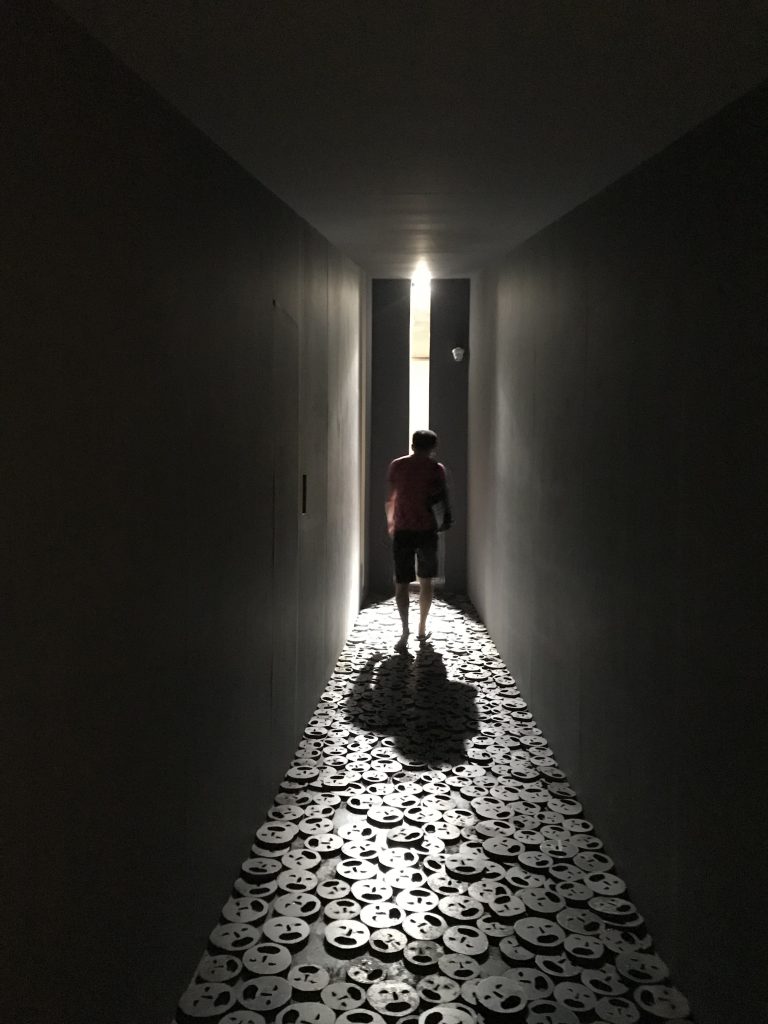 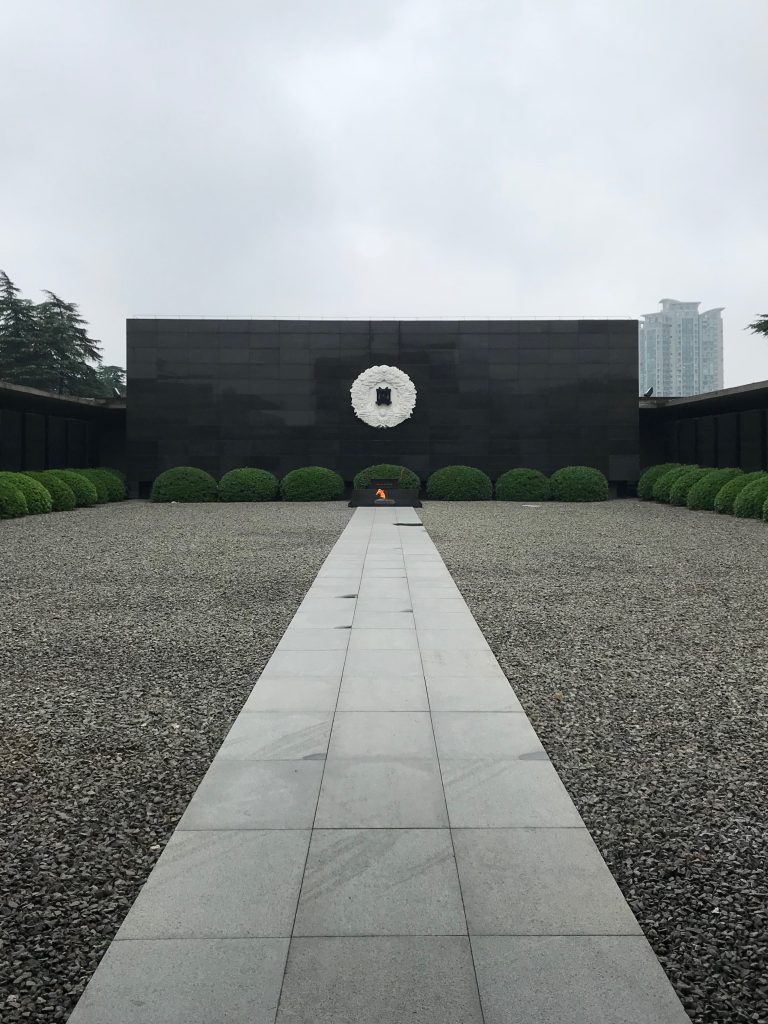 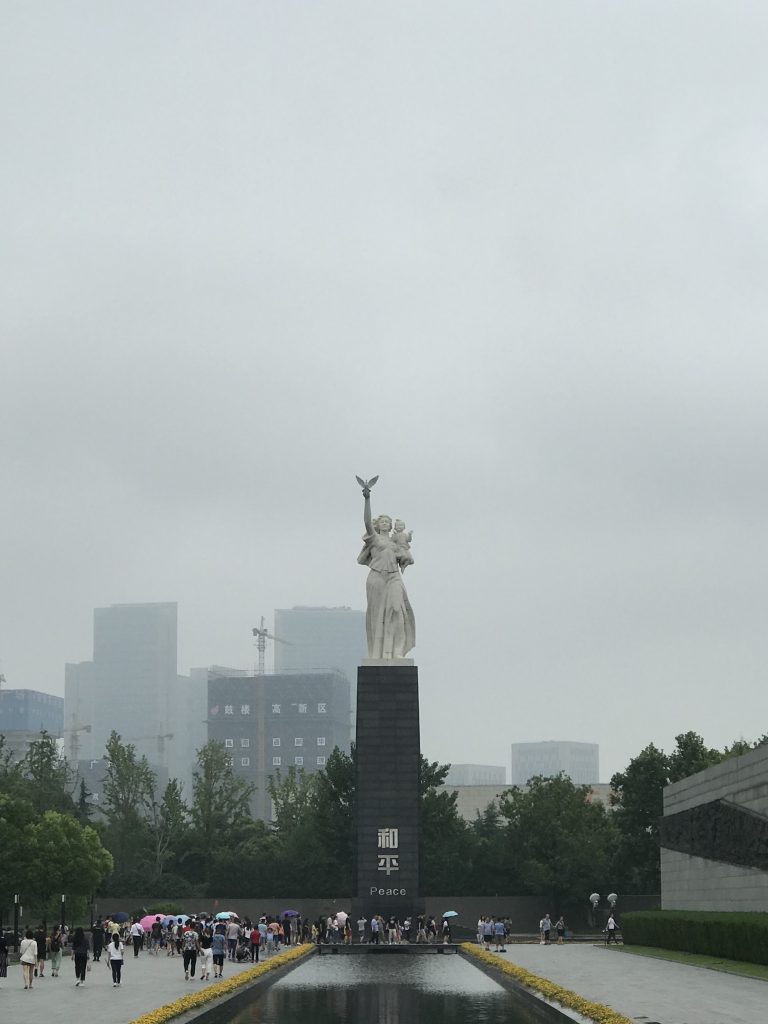 So leaving all the sadness behind, we went to the Youth Olympic Park which is kind of like the YOG area in Singapore at marina barrage. There was this bridge there spans across one of the small branches of the Yangtze river. Here’s our actual conversation when we saw the bridge.

“Eh what’s at the other side of the bridge ah?”
“Some island I think”
“There can get bike a not?”
“Uh I think cannot leh. Bike also cannot go anywhere”
“Wait you mean if we cross the bridge then we need to cross back?”
“ya”
“Huh then can we just cross halfway then cross back I’m tired”

LOL I’ll let you guys guess who said which part ok it’s not that hard HAHA but yes after we reached the bridge, we took some touristy photos at the head of the bridge and halfway along the bridge HAHA along the way you can see like motifs of the different sports and we tried to interpret them some other way. Like canoeing was someone trying to get out of bed or something HAHA and table tennis was someone cracking a egg – other than that the view was actually great!

After this we left for dinner at some street 玄武门 (xuan2wu3men2) but sadly we didn’t really explore much because it began to rain again. The only thing I remember was the smell of smelly tofu permeating the air and I just wanted to leave HAHA

Day 3 was just a half day for us as we prepared to leave Nanjing. Hence we decided to walk around 秦淮河 again. We visited this museum where one of the prime minister of the Eastern Jin Dynasty stayed (iirc). It was just a small museum and all but still pretty exciting. You know there’s just something nice looking at a piece of artifact or painting and thinking how everything was like in the past.

After this we went to take the train back and met our buddies for dinner and karaoke HAHAHA I am so grateful to these theme because they said we could claim for dinner and karaoke and you know what beats singing karaoke? Yes that’s right singing karaoke for free!!!! but all jokes aside, the past 3 days has been fun and was a great distraction from Netflix during recess week HAHA 6 more weeks left here, till then, bye!