Due to my participation in SUTD’s freshmore orientation, I only arrived in Hangzhou a week after most of my ALP counterparts. It was strange to see the difference a week can make when the latecomers were in a frantic rush to set up their mobile phones and bank account and orientating themselves with the new campus, while the rest had an abundance of free time, which they mostly used to explore the nearby area. Upon recently landing in Zhejiang, I could instantly feel a stark difference between SUTD and Zhejiang’s campus. Zhejiang feels a lot more like a town, with different kinds of bubble tea shops and convenience stores that litter every street, while SUTD feels more purely like a school in and of itself. No doubt ZJU’s campus is considerably larger than SUTD’s, but their buildings are a lot more spaced out, to the point where the scenery really takes over, providing the entire campus a sense of tranquility, which I very much enjoy.

On the second day, we took a trip to see the World Industrial Design Conference museum, where they showcased a variety of different projects, some completely new and some improvements on current technology. The projects were similar to a module we had in SUTD called Intro to Design, and it was interesting to see the ideation process of actual industry level projects.

One thing that surprised me in the first few days of being here is that China is unexpectedly big on cashless payment. Although it’s something that’s talked about, it’s completely different to experience it first hand. In Singapore, typically only brand-name shops can afford to offer payment by Nets or Visa, and even then not all of them have tap-and-go services. However, in China, even the small mama shops at the roadsides allow you to pay by scanning a QR code on your phone. Not only that, but the shop owners are so used to it that you can see them physically groaning when they notice us pulling our wallets out to pay in cash. The sudden convenience was welcomed warmly, and despite it only being the first week, I think it will definitely be one of the things I will miss about China. 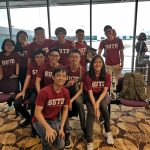