Starting off the week with a short presentation from the previous buddy day excursion, I got to see what the other groups did and where we can go within this short trip. The food shown within the presentations looked really good and I was particularly interested in the old street called Qing He Fang street. Later that day we met up with the theme leaders and had a short briefing on which days our official class starts.

On Tuesday, I had a class called DIP(Designing Information Products), where I joined my group to create a futuristic product that aims to provide more information about certain products. My team has already done some ideation and my role in the group is to work together with them to bring this idea into reality. Their main idea is to create a product to be placed in a supermarket that allows users to decide whether they should buy a certain product when they are uncertain about what they are looking at. It also doubles up as a product showcase shelf where the supermarket owner can display hot selling products that they want to recommend to their customers. I am particularly interested in this project because they are planning to create a more futuristic interface where the user can use hand gestures to play with the interface and to look at their product. I believe that in the future when products gets more intuitive, hand gesture recognition is an important skillset to have and I am interested to learn more about it through this project.

On Wednesday, I had a field trip to a famous 3D modelling company called Shining 3D. It is amazing what they managed to do there, by fully utilizing the benefits of 3D modelling, they played a part in improving the efficiency of manufacturing complex structures; making it easier for dentists to manufacture braces, retainers and dental implants; even unleashing to possibilities of food making, where they can 3D print chocolate and cookies; and lastly the research into 3D printing organs. I was most amazed by 3D printed shoes meant for the specific user, where they can scan their feet and print a shoe sole specifically meant for them to use. I believe that in the future, the products sold to users will become ever more specialized and catered to their needs, and 3D modelling will definitely play a huge role in such a future.

On Thursday, I had the class “Origami Robots” for the entire day. They first gave a quick introduction on how the course is going to run and then they taught us about the different categories of robots and what they aim to achieve in this course. For this course, the primary objective is to create a moving origami robot that is able to interact on a basic level with humans. The origami robot must also appear “living” which is why we aim to make it move/breathe. In the later half of that day, we folded some basic origami that allows for a degree of freedom in motion and played with Arduino to get the origami moving using Servo motors. By next Monday, we have to demonstrate our moving origamis and also show them a video of it in motion. 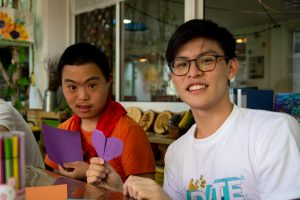 Friday is CIP day! We went to 湖墅学校 and had origami/threading/baking class with 13-15 year old. The CIP was much harder than expected as the kids had a really short attention span and some were unwilling to follow the class. However, they seem to have fun playing around with origamis and some of them were really proud of what they had made. It was a tough but fulfilling experience with them, and it taught me to be more patient and learn to be more understanding with less abled individuals. For the next 2 upcoming classes, we are going to change our lesson plans to fit more appropriately to their needs such that they can have a better time together with us. Saturday, I went to Wu Zhen water town and it was really beautiful. People called it the Venice in China and I feel like it is quite the appropriate name. We walked around the place and tried the famous Dong Po Rou there. It was one of the best Dong Po Rou I had in my life and it was not a wasted trip. The martial artists there were really good too and in one of the shows, I am amazed by how comfortable the martial artist is when he climbed up an almost 5 meters tall bamboo pole and does tricks above the water. Overall this week is a fulfilling and fun one, I will work more on the skills required for my projects and strive to improve myself further.