This week marks a month into my Design and Technology Experience(DATE) here in Zhe Jiang University, after all this time, I feel that I have assimilated into the Chinese and school culture. This week my main focus was on the Origami robot product which is the main deliverable in this month’s DATE program.

Since we’re on the topic of the origami robot, I would share my experience of building this origami product. Through this program, I have been able to strengthen my understanding of the components that can be used with the Arduino board and with C++ programming language to control the Arduino board. I’ve been enjoying the process and having the time to experiment with the different components and how we can combine the parts in the Arduino IDE. On top of that, I learnt a new video editing software, Final Cut Pro X, which is a proprietary software designed for macs. With Final Cut Pro X, I feel that this software has been the most intuitive video editing software, having used a few other editors including Adobe Premiere Pro.

Therefore, I’m thankful that the DATE program provides me the relevant resources and time to develop and hone skills that will be beneficial for future projects. For the origami robot, we developed an origami platypus robot where it has three main movements, namely vertical head flexion, lateral body movements and vertical tail movements. In addition to the main movements, we use sensors in the Arduino kit to allow our origami robot to be responsive to certain triggers.

During the weekend, we visited 双龙洞景区, a hidden gem away from the tourist that is an hour ride from Hangzhou by high speed train. We woke up at 6am in the morning so that we can catch the earliest train to reach there, as with most train trips out of Hangzhou, we went to 杭州东站 and caught a high speed train to 金华. The train reached a top speed of 293km/h which was an experience for me and knowing the fact that I’m in the train that is approaching the speed of sound. It really impressed on me how China has so many of these lines spread across the country and it really improves the interconnectivity between cities. The train ticket price was very affordable too, costing about S$12 for a one way travel with the second class seats. At 双龙洞景区, we were pleasantly surprise to find out that this was not very crowded and it has probably been not widely known outside of the city. This made the trip extra special, knowing that we were going to a destination less travelled and we could better experience the place without needing to fight with the crowd. 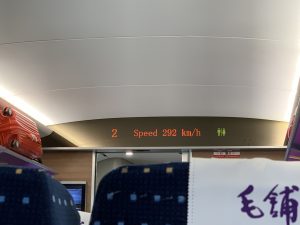 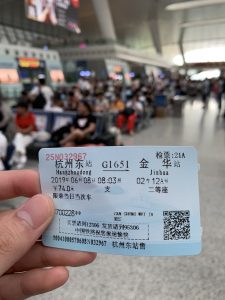 The 双龙洞景区 compromised of a nature park where the cave is one of the main attractions of this park. At the entrance of the park, we bought the tickets for the cave. The whole process could be done within the Alipay or Wechat app which was very impressive for me. In the queue, we could simply scan the QR code and purchase the tickets without the need to visit the ticketing counter and we can just scan the QR code at the entrance gantry. This made the process very seamless, allowing for better crowd management in the park. The first place was a cave waterfall which was dubbed to be the most beautiful cave waterfall where the water falls from a height of 3 floors which left me in awe. What struck me most of this place was the thought of how the place was discovered, how did the first person chance upon this cave which was so inaccessible. Afterwards, we visited the cave, we headed to 鹿湖 which was the most picturesque lake that I’ve ever seen. The lake was skirted with tea plantations, a beach, a temple and dam which made the lake a really unique visit. 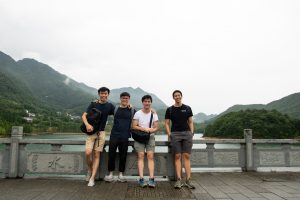 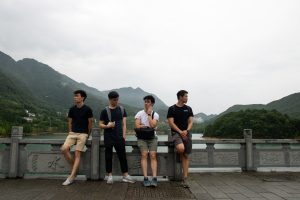 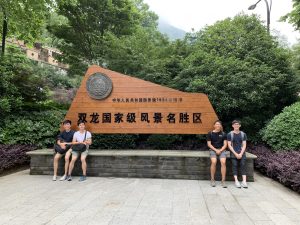 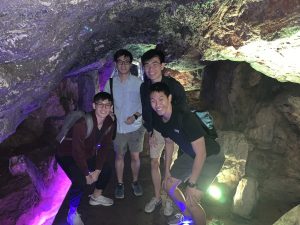 Reflecting after this trip, it made me realise that going on personal travelling trips, allowed me to expand my experiences and gains ideas that builds on top of my academic knowledge that I acquire during the DATE curriculum which allowed me to have a journey in China thus far.

This week, we also had our final session of CIP with Hangzhou HuShu school where we had a dance session with the students of the school. We taught the students two main dance, but as with what I learnt from the previous session at HuShu school sometimes the focus of the activity does not need to be in skills or values learn but being able to live in the moment and have fun. I’m very sure we were able to achieve this purpose and add some color into the life of the students there. Summing up my OCIP experience, the main thing that I learned that there are many things in life that we can find little joy in, and does not require through rigoured processes that skills and values are developed, but through experiential learning as well. 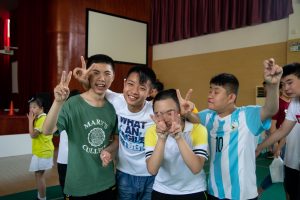