This week is mostly spent on finishing up the origami project and a little bit of DIP project while also exploring more of Hangzhou xi hu area!

From Monday to Wednesday, it was all spent on doing up the origami robot project such that on Wednesday we could put up a good presentation. We split the work up into 3 sections: the origami robot itself (Arduino coding and action design), the video (filming and editing) and the poster (a compilation of all the work we have done as well as a guide on how to interact with our origami robot). Me and Xu Liang were in charged of the origami robot where Xu Liang focused on getting the sensors to work along with the actions in the Arduino code, while I focused on modifying the actions of the seal itself such that the seal looks natural while doing its actions. Before working on the actions, we had to come up with ways for our robot to be able to interact with the audience. We chose to use an ultrasonic sensor and a shock sensor for our robot to react to. This led us to having 6 different states our robot can be in. 1) Alone and not in shock, 2) Far and not in shock, 3) Near and not in shock, 4) Alone and in shock, 5) Far and in shock, 6) Near and in shock. The more we thought about it, the more complex it could get where there could be actions for each transition between states. After much deliberation, we concluded that if we included transition actions as well, the robot will look too unnatural and it is likely it will mess up more due to inaccurate sensors reading. Thus, we decided to keep some transition actions and only limited it to a reaction of shock when it transits from a not shocked state to a shocked state. This went on for a good 3 days as the actions needed to be calibrated according to each state and we wanted to have a certain amount of randomness within the actions such that it is not always on repeat. Luckily we were able to finish it by Tuesday such that we had time to film before Wednesday which is the day of the presentation.

On the day itself, there were not a lot of outsiders who came to look at our presentation but there was a lot of support amongst ourselves where we went around and looked at other groups inventions. There was some discussions amongst ourselves and it was mostly pointing out all the positive sides of each others projects which I thought was a really good culture that we had. I am grateful to have friends who will not only care about their own projects but also give support to each other and I am glad to be part of such a homely community. The professors also went around giving a quick assessments of every project and we received good feedback on how we could have done better as well as which areas we had done well. Overall, it was a nice sharing session and I am very happy with our results. 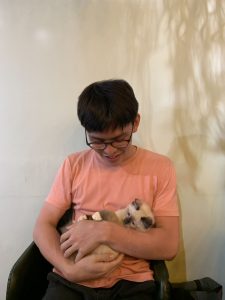 From Thursday to Sunday, there were no classes for me, and it was a period of time where I explored Hangzhou and worked on the DIP project whenever I am free. I had to figure out how to make Unity recognize that someone wants to draw and allow the user to draw shapes/lines with their hand/fingers. I am not yet done with implementing this function but I am getting closer every day where I learn about line rendering in Unity and getting more familiar with the Leap Motion Documentation. The places that I explored this time are mostly beside Xi Hu where we went to a board games café as well as a cat café. We also hiked up the mountains near Xi Hu which has a really nice overview of the city. Overall, I am very satisfied with this week as we finally finished our Origami Robot Project as well as making some progress with the DIP team. All while being able to explore Hangzhou a little bit more. Looking forward to starting the Design Fiction course as well as finishing up the software for hand gesture recognition!