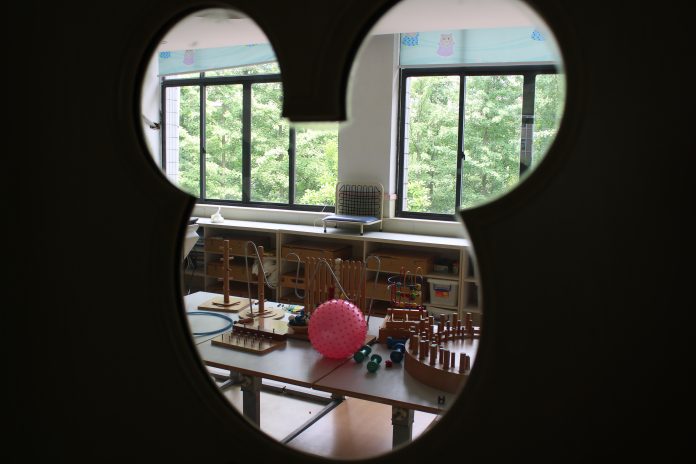 Hu Shu school is a special needs day school that takes care of children up until age 20. We visited Hu Shu a total of 4 times as part of the community involvement program. The first time we visited was to scout out the environment, have a short chat with Wu Lao Shi (the coordinating teacher) and also to plan what we wanted to do with the children. First impressions of the place was that it seemed extremely condusive for the children, where everything is colourful and the vibe was extremely cheerful. There was constant soothing music playing through the PA system, and the hallways were decorated with small arts and crafts that the children had made themselves. There was a section of the school which was dedicated to the older students, with a kitchen and complete with a small milk tea shop and mini grocery shop to teach the children how to make their own food and beverages to then sell off. The students are typically split into separate years, each having their own classrooms.

The second visit we had was to spend time with the youngest children, who are around P1-P3 level. We decided to do something simple that they would enjoy. We went with teaching them how to fold paper aeroplanes, with the option of decorating and personalising their own planes, and also an aeroplane throwing competition at the end of it, with prizes to be awarded for the furthest planes. We started off strong, and the children seemed really interested in folding, even though the youngest ones had difficulty being able to fold the paper properly. We guided them along, and helped when necessary. However, what we did not anticipate was just how long the attention spans of the young children would be. After about half an hour, the children were no longer interested in the planes, and started doing their own things. But once we moved on to the competition, they were back on track.

The third visit was for the P3-P6 students. They were older and more engaged, so since we had some dancers in the group, we decided to teach them a dance that Wesson choreographed himself. The dance had simple but fun moves, and the whole dance lasted for about 3 minutes. We danced to a popular Chinese song called “海草舞”, which translates to seaweed dance. We taught the dance in parts, with 3 people dancing on stage and the rest of us mixed in together with the children. At the end of the session we put everything together and everyone had a huge mass dance.  It was a lot of fun for everyone involved.

The fourth and last visit was to spend time with the oldest students there, aged around 16-20 years old, some nearly our own age. We split into 4 different groups, one group helped to man the milk tea shop, one group helped the students in baking chinese biscuits, one group baked pastries with the students, and my group did some arts and crafts. We started off with some painting, followed with folding cloth to make bows for hairbands. The activities were a lot of fun and extremely calming, and it gave us a chance to bond with some of the students.

Overall, it was a great learning experience to be able to work with special needs children, to be able to see and understand their mentality and behaviour from a first hand perspective. I am thankful to the school and to Wu Lao Shi for the opportunity to do so.