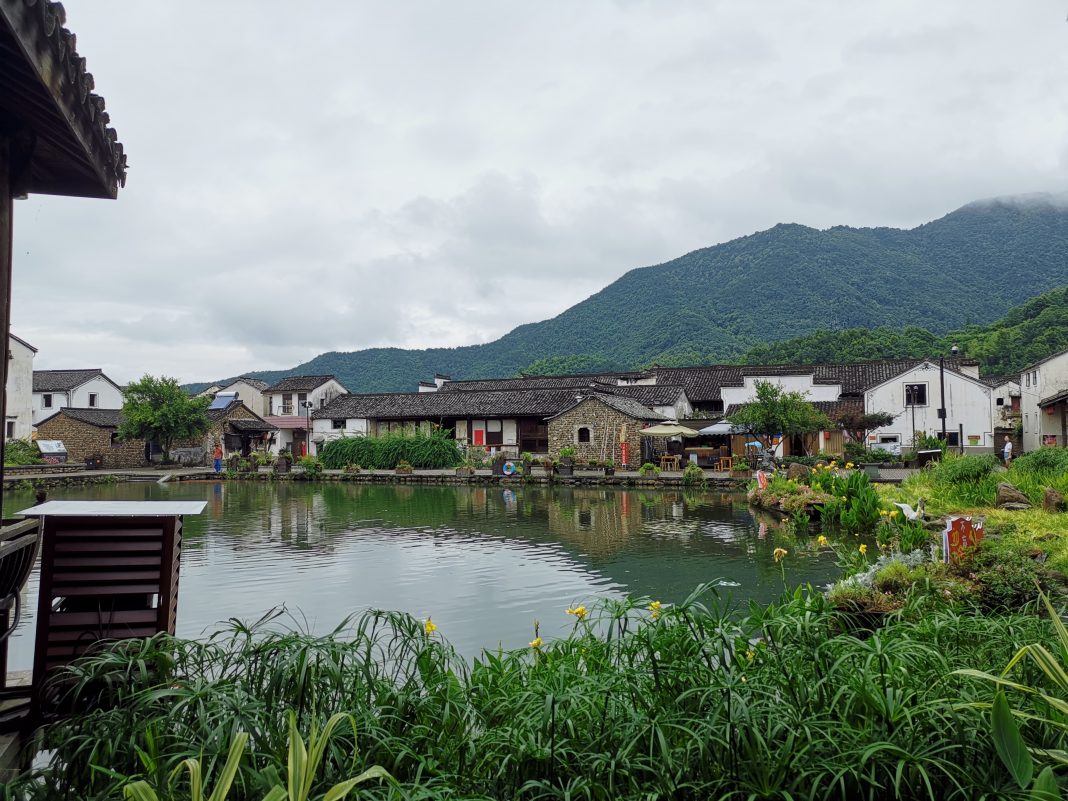 This week, our team went to visit another historical town in China: Longmen ancient town, 龙门镇. It was named after an ancient poem by Yan Ziling, and its name translates to “Dragon Gate” in English. It is a town which is located south of Fuyang, a 1 hour and 30 minutes drive from Hangzhou, and charges an entry of 80rmb for adults, or 40rmb for children and students.

This town contains buildings from the Ming and Qing dynasty, where some are open to public. Many of these buildings appear to be in their original states, which adds to the rustic feeling of the ancient town. Like other old towns, the walls are white but stained throughout the years, and have drawings depicting traditional Chinese cultures.

Also, many buildings are found along a river, as it brings convenience to the settlers of the past.

A good 90% of the population are descendants of the sun (see what I did there?); there was a warlord called Sun Quan, who was born not far from Longmen, and made his mark in the town when he was passing by.

Despite being a AAAA-class scenic spot, there are not many visitors around. As such, it is the perfect place for a peaceful getaway break from the city.

One interesting thing to note is that there are numerous badminton racket shops in the town. Regrettably, I did not ask them why it was as such.

Afterwards, we visited Shenao ancient village, which was a 20 minutes drive from Longmen ancient village. Unlike the first, Shenao provides free entry, but as such is less tourist based and less commercialised than Longmen.

More houses in this area have been renovated to look more modern and to house more modern facilities/necessities. There still are some traditional houses left untouched which are open to public, where many of such houses contains pillars with carvings. It is as if it was depicting a scene of how things were during the time the house was built.

The main reason why we visited this area was to look at an architectural work – Ruralation Shenaoli Library, from AZL architects. The library stands out from its environment, looking much more modern (and less stained) than other renovated houses in its surroundings.

The space inside has been transformed into a quiet library, where the heavy usage of wood gives a very warm and homely feel.

There are differences that can be drawn when comparing the two ancient towns together: Longmen ancient town seems to move towards the path of being a traditional tourist attraction, to preserve many of their traditional buildings and also slowly accepting the idea of commercialised goods; Shenao ancient town seems to move towards modernisation, to change the shape and layout of newer buildings so as to fit the current needs of families. While both paths are not wrong, one cannot help but wonder how the outcome will turn out. A few questions come to mind: how can the villagers generate a proper income and atmosphere to live on comfortably, while still preserving the tradition, culture and history of their town? Where should they draw the line in this compromise, to ensure a balance of both where their livelihoods are comfortable and their history is not lost? And how can buildings be designed – or redesigned – to achieve this compromise?

In all, the visits to both ancient towns was an eye opener, and I cannot help but wonder if there will ever be a chance to design a traditional-looking building which can cater to the present needs of the villagers in an ancient town.