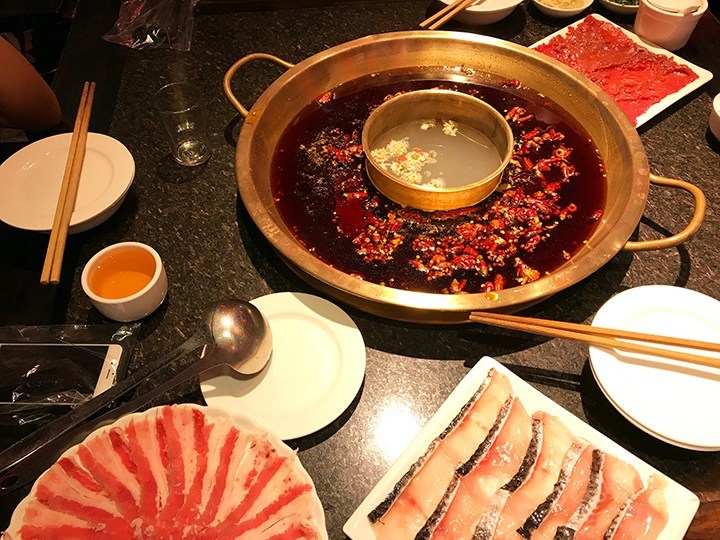 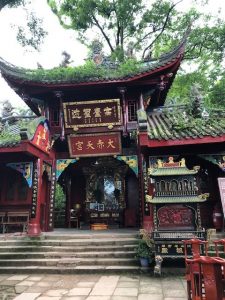 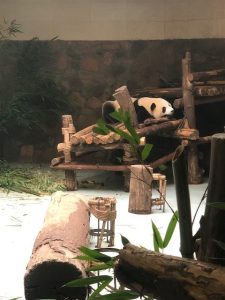 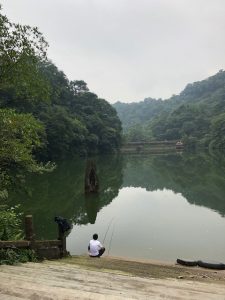 My former JC classmate invited me over to her hometown, Chengdu, to explore the city and I was more than happy to get a free tour package with her as my personal tourguide heheh. Little did I know that the high speed train duration is around 14hours from HangZhou and I automatically switched from train to airplane option in my FeiZhu App. Even by plane, the flight duration is 3 hours long. Just a tip – Chinese apps (C Trip, Meituan, FeiZhu) have the best tickets offers and they can even be half the price of online sites.

The weather in HangZhou had been unpredictable the whole week, drastically shifting from sweltering hot to drizzling rain within the same day. My flight was delayed for 2hours due to bad weather and I arrived in Chengdu at 2am in the morning. I was extremely surprised and touched when my friend’s mom tried to communicate with me in English instead of conversing away in fast Chinese when she picked me up from the Airport, albeit how basic the words were. 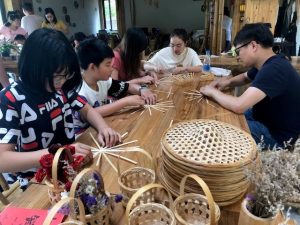 The next day, my friend brought me out to explore a tourist village famous for its bamboo weavings.

We joined the workshop and after 3 strenuous and patience-testing hours, we managed to weave beautiful small round hats and red roses made entirely of bamboo strips!

Unknowingly by my friend, her dad was actually having a business meeting while we were having the weaving class and we ended up having barbeque with her dad’s 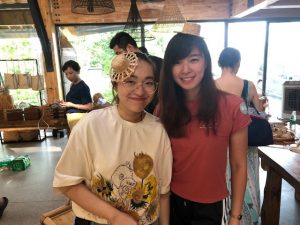 colleagues and their families in the bamboo village. Funny thing about Chengdu people, they were absolutely friendly and good-natured, a huge contrast to the locals I met in Hangzhou. Despite the language barrier, everyone tried to converse with me, either with basic Chinese or English, and apparently everyone knows I’m the “foreigner newcomer”.

Since Chengdu is the home of the giant panda, the Chengdu Research Base of Giant Panda Breeding is our next stop. The pandas were only allowed to play outdoors when the weather is sunny, yet below 25 degrees Celsius, so we can only observe the cute fluffy panda cubs inside the enclosure. We were lucky that the moment we stepped in, the two cubs started wrestling and playing with each other, gathering “oohhs” and “aawwws” from the increasing number of spectators. Not forgetting the red pandas, I found them even more adorable than the giant pandas, with their naturally dumbfounded expression, delicate features, red furs, bushy striped tails and quirky movements. 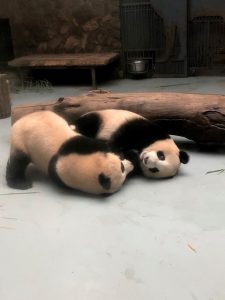 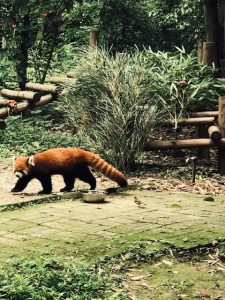 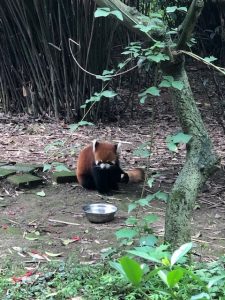 We purchased a tour bus ticket for 10元 to go to our next destination – Wu Hou Shrine Temple of Marquis. 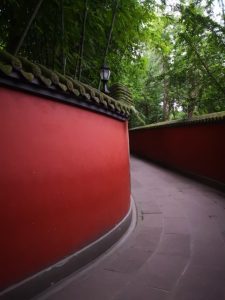 It is dedicated to Zhuge Liang, the Marquis Wu (Wuhou) of the Kingdom of Shu in the Three Kingdoms Period. Zhuge Liang was an excellent politician, militarist, diplomat and astronomer.

In addition, the Temple of Liu Bei, the emperor of Shuhan, and his mausoleum are well-known historical sites inside this big scenic spot. The shrine is decorated with pretty bonsai gardens, temples and a long stretch of red-brick wall – the essential instagram-worthy background.

Jinli is the best place to spend your money, from local snacks and handicrafts, to opera theatres and bustling bars with live music. Personally, I recommend trying out the sticky rice with meat and the famous 3 mochi balls served in brown sugar gravy. The maker would bounce the mochi balls on a wooden table, causing the metal plates on the table to melodiously clang and sounds like “Ring-ringring”. I would also highly suggest watching the 3 Kingdoms Performance in the opera house in Jinli. It consists of a variety of performances, from Chinese dance and acrobatics, comedy sketches to opera singing, and the extremely popular biàn liǎn; the Face-Mask Changing display, in which the actors are able to change their masks in a split second. All the prices were reasonably priced and worth every penny! 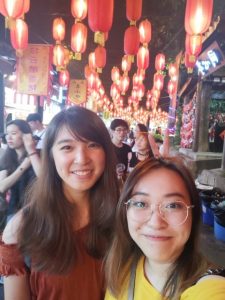 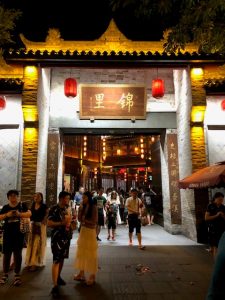 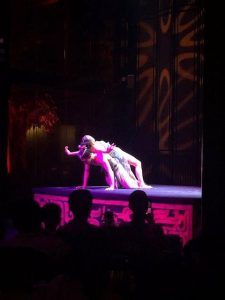 We also took a day trip to Mount Qingcheng, which had been integral to the founding of Taoism. 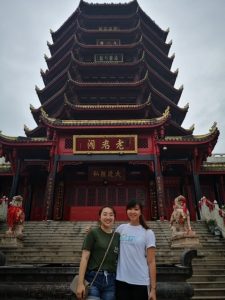 There are well-placed, colourful temples dotted up the hill for visitors to pay respect and take a rest in-between the 5000M hike up the top of the mountain. I was taken by surprise when a small boy asked for a picture with me, probably my loud talk in English giving away my identity..again. Nevertheless I was flattered.

Even though the trek was around 2 hours long, it didn’t feel tiring at all because the path was well-paved and the scenery along the way was absolutely breathtaking. We were lucky because it was cloudy and it didn’t rain despite warnings from weather forecasts.

The peak is graced with a tall red pagoda that overlooks the surrounding mountainous landscape and the altitude was pretty high such that we were actually above the clouds. The view was mesmerizing and the clouds made it even more picturesque, as if it was taken from an old Chinese painting. 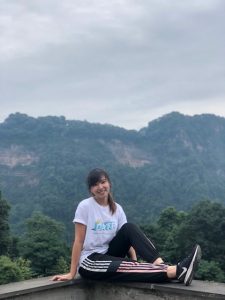 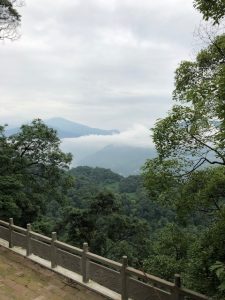 What better way to end the trip than to go shopping! My friend brought me to Kuanzhai Xiangzi alleys, basically a Chinese version of Haji Lane. The shops were situated in an old district, featuring ancient-style Chinese buildings that were so beautiful every corner was picture-worthy and selling local goods and souvenirs that were value for money. ChunXi road is also a mention-worthy shopping district (aka window-shopping place), mainly for the lovely modern architecture that house high-end luxury brands. Be sure to check the 3-storeys Starbucks glasshouse! 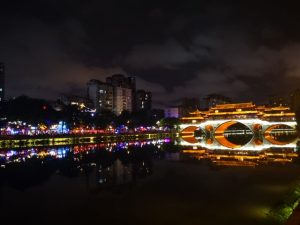 I would love to talk about how delicious Chengdu food is and how authentic and spicy the MALAA HOTPOT<3 is but I wouldn’t be able to stop if I did.

IMPORTANT TIP : Present your NRIC for student price (half-price) to all the attractions (ZJU student card wasn’t accepted ☹) and be prepared for locals gawking at you when you speak English, random strangers starting conversations and the unexpected amiable nature of the locals that you’ll truly miss once you go back!