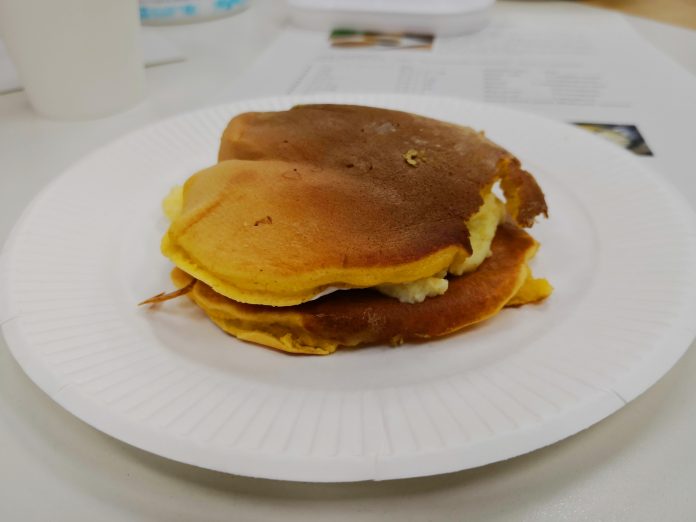 So yesterday was a pretty long day. There was a Dorayaki making session for International students so Frank and I signed up for it. It was fun interacting with both the other exchange students as well as the Japanese organizers and it was a super chill session. It was our first event with this international student group and apparently they have lots of other activities every other month as well, like juggling, tea ceremony and more! I hope there will be another one next month that we can attend.

Afterwards we had a pretty long session in the lab. First we had an activity where one of the lab members share something interesting. We had a short calligraphy session this time. That was followed by a case study of another industry – the ski industry, before we returned back to hostel.

On our way back, Frank and I bought bentos from the basement of a department store in Shibuya. Usually at night, (about 8.30pm onwards), prices are slashed (sometimes up to 50%) so we can get dinner or the next day’s lunch for cheap. We bought this bento for 490yen (~$6.10 SGD) after discount. It was yummy!

Alternatively, most convenience stores sell bentos at about $6 SGD (full price). However, they usually don’t do discounts and the food is usually not as nice as the one in the department store.

Other than bentos, other cheap alternatives are common food places littered throughout the streets. Try walking further out of popular metro stations and you can usually find some food places that are affordable, like Yoshinoya or Matsuya. Earlier this evening, I stumbled upon a Tendon House..

This one was of the smallest size (so it wasn’t very filling, just like the bentos) and it was also roughly ~6 SGD.

Well, I hope this post gives some idea of how the prices for your meals are like in Tokyo! It’s not exactly cheap, but it can be fairly affordable in my opinion. Portions are smaller than I’m used to, which can be a good or a bad thing. Of course, for food shops like Yoshinoya, Matsuya and this Tendon House, there are multiple serving sizes and it is common to also see rice bowls paired with soba for maximum satisfaction (I love soba!). It all depends on your budget for the day 😉