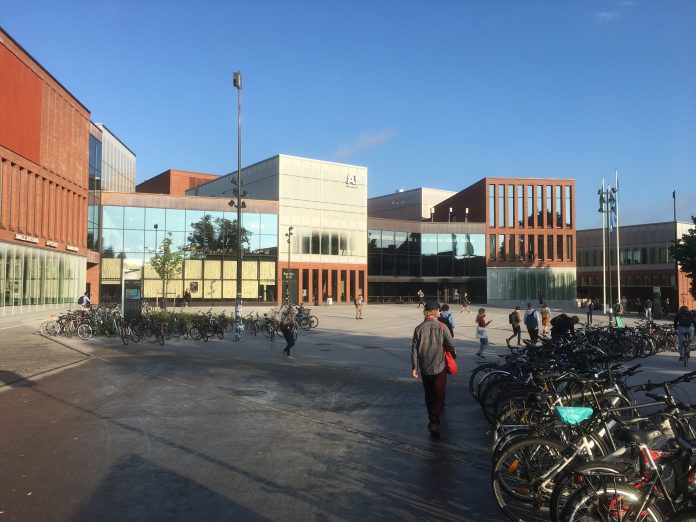 The first building you’ll see called A bloc where there’s the cafeteria, supermarkets and metro station

Orientation week started on 2 Sep and we were looking forward to the fun activities! This is my second time going to the campus and boy do you have to walk far to get to one place to another within the school, kinda makes me miss the 5 mins convenience we have from hostel to class especially in the morning.

The first day was filled with the super exciting enrollment procedures! (And by super exciting I mean just a lot of waiting around lol) My roommate and I arrived slightly earlier and was lucky that we had to wait for only 10 plus people before we could enroll. After that, I went to find my tutor group which was like an orientation group before we set off together to buy our HSL card for transport. On the way, I chatted with my groupmates and it was really interesting to learn about people from so many different countries like Turkey, Spain, France and Germany.

There was going to be a campfire that night and we had a design a group flag for it. We decided to just draw something representative of our countries on the flag and I attempted to draw a merlion. Didn’t turn out very nice but still cute :’) The place where the campfire was held at was actually quite nice but the weather did not help with all the gloomy clouds and drizzling. Soon the rain became too heavy to continue but luckily I could get a piece of pancake before everyone had to move.

The second day consisted of talks in the morning and then the Aalto Party in the afternoon. It was like a massive fifth-rows exhibition but with more games, food and freebies! There was a bingo card we had to complete to get even more freebies so I went around with random people that I met to finish the tasks. It was really nice and people were quite friendly as some of the games and tasks I feel I wouldn’t have been able to do back in Singapore as it would be too embarrassing.

There was going to be a pre-Aalto Afterparty and an Aalto Afterparty that night, but I was too tired to go and decided to go back home after eating my fill at the free food at the booths. I thought it was very interesting how Finns liked to party so much especially considering that they had the image of being introverted and enjoyed their personal space (according to a cultural talk we had). My tutors even said there was going to be an after-afterparty so you can really tell they are serious about partying!

On Wednesday, there was not much until in the evening where we had an overalls presentation and guild initiation. Students wear colored overalls according to their guilds in Finland. For example, computer science is black, physics is white, mechanical engineering is pink etc. and they will collect badges to sew them on. They can completely customize their own overalls, even swapping sections of the ankles on their overalls with their girlfriends/boyfriends if they are in a serious relationship! During the guild initiation, we went around checkpoints to learn more about the guild, such as their own sports or gaming clubs, and also the executive committee.

On the fourth day, there was otaorienteering, which was like a mega version of the guild initiation we had yesterday. There were checkpoints of all the associations and guilds in Aalto and we went around to complete tasks and get points. It was unfortunate that it rained during this time so it was harder to get around. However, we still had a lot of fun learning about the different associations! After this, my roommate and I attended the afterparty which had performances by dance groups and bands, which were really good.

Overall, orientation had been super hectic but fun, and I was able to make many new friends! Looking forward to when school starts next week!