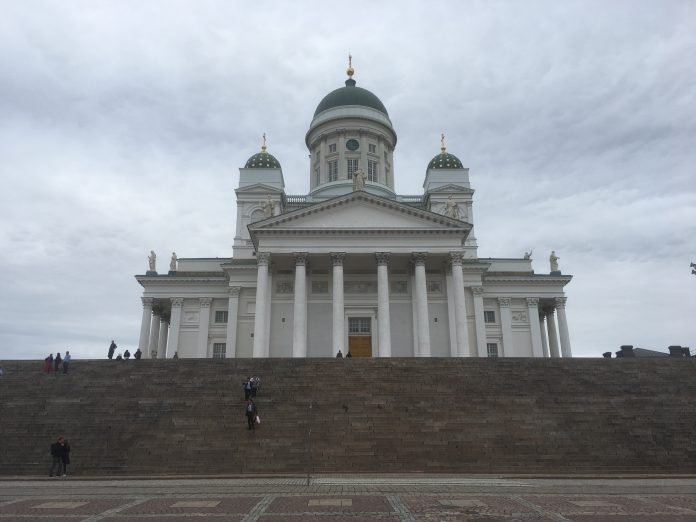 Helsinki Cathedral, would have been much nicer with the sun out!

Over the weekend, I was thinking hard about what courses to take. There was so much to learn yet so little time. However, since the first week we are allowed to add/drop courses freely, I decided to register for all that I was interested in and attend their first lessons so that I may make a more informed choice on which to take. As I looked at the list of 10 courses, I took a deep breath and decided to first have some fun exploring Finland.

On Saturday, my roommate and I went to IKEA which was close to our home. We went there for lunch and some shopping for necessities. I think the highlight however, was buying their 1 euro strawberry ice cream on our way out which was sooo good! On Sunday, we finally went to Helsinki and explored the Market Square and cathedrals. We also had some good traditional salmon soup buffet (11.90 euros) which I personally thought was more worth than the ones sold in the Market Square (8 euros) but it was hard trying to eat more than 2 bowls as it was quite filling. We also tried out some fried vendace which was like small fish that you can eat whole with head, bones and all. As the sky was cloudy and it started to rain, we went to Moomin cafe to wait it out. We tried their chai latte and chocolate cake but we were kind of disappointed that the taste was not that good. After waiting for some time, the rain still did not stop and we thought it would be a waste to visit Suomenlinna without a sunny weather. Hence, we went home for the day.

When Monday came around, it was pretty intense attending the lessons. Each lecture/exercise typically lasts for about 1h 45mins and I had lessons from 10am – 6pm with a 2h break at 2pm. My stomach was not prepared as I did not eat breakfast and it was growling from 11am and starving when I could finally eat lunch at 2pm. Took a generous portion of food at the lunch buffet which costs only 2.6 euros for students, as long as you can fit everything in 1 plate!

It was pretty much the same on Tuesday, but we had a Freshman Crawl event at Helsinki that evening. It was another fun time as we get to explore Helsinki while completing the checkpoints, and somehow people love cucumbers as there were many games that involved a cucumber one way or another?

Wednesday was the most hectic, as there was no breaks as at all from 10-6. But that day, I was prepared. Made a scrumptious breakfast and also packed my lunch to eat in class. The week went on, and there were several assignments due already. That weekend, I did not really go out as I was tired from the week and was also completing my assignments. After spending some time to think about the courses, I dropped a few which were less interesting and focused on those which I liked more.