Directly translated as “Emperor’s Palace”, Huangdidian is one of my favourite trails in Taiwan because it is a sweet combination of ropes, chains, ladders and ridges and the length of the trail was just nice. Just an hour’s bus ride away from Taipei City, Huangdidian offers a mountainous landscape with lush vegetation, and is a nice respite from the city. Certain parts looked really challenging and almost impossible since a careless footing could result in a nosedive to death, especially from a city boy that is not very experienced with mountainous terrain. 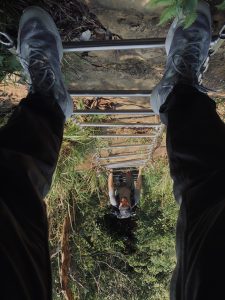 Taiwan have a strong hiking culture that spans across all ages, and especially among the elderly since it is very healthy for hiking to be part of their post-retirement lifestyle. I remembering standing there a minute or two and calculating the risks involved until the sight of a group of women in their 50s or 60s descending put me to shame and made me question my 2 years spent in the military. 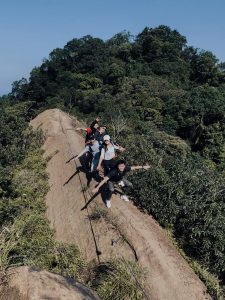 The Fulong area lies at the easternmost cape of Taiwan, also a relatively short train ride from Taipei City. One can do a bike trail in the area, from Fulong train station through Old Caoling Tunnel and subsequently to Sandiao Cape. In the 1600s, the Spanish landed near Fulong and named it Santiago, which is now transliterated as Sandiao Cape. At the end of the Old Caoling Tunnel is a small village with small stone houses, which are built when Qing colonized Taiwan, by the Fujian Fishermen. The Old Caoling Tunnel itself is built during the Japanese Occupation and was the longest tunnel in Taiwan at the point in time, spanning 2167 meters long!

Cycling through these historical landmarks would seem almost like a journey through time! 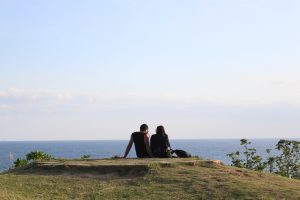 Along the Pacific Coastline

On a sweaty hike up Mt Qixing, it was interesting to witness the change in temperature and pressure as we ascended, and more noticeably, the types of vegetation at different elevations. Near the base, it was mainly a subtropical landscape with lush and dense vegetation. Near the top, at above 100 metres, it was mainly scrub-like trees and tall clumping grass.

Not long after, the fog rolled in and if not for the drop in temperatures and stronger gales, I could not even tell that I was standing at an elevation 1120m, the highest point in the north coast of Taiwan. I heard from the locals that we started our hike on a bad timing on a bad day, since fog is a very common phenomenon during noon at that period of the year.

We then trekked down on another route and ended up at Lengshuikeng. Contrary to its name which is directly translated as cold water pit, Lengshuikeng is actually a hot spring, albeit one of the cooler ones in the area, open for visitors to soak their food in a public pool after a day’s hike in the national park. The national park is home to 13 different geothermal areas that fall into the following category: Acid sulfate (white sulfur) hot springs such as the one in Zhuzihu, acid sulfate chloride (green sulfur) such as in Xinbeitou and the Neutral iron-bearing in Lengshuikeng. These hot springs require an underground supply of hot water, hydrostatic pressure to force it upwards, deep fissures of the rock for it to penetrate to the surface.

On another early morning with clear blue sky and a cool weather later in the semester, I decided there could not be a better opportunity for me to head down again. I hiked up from Lengshuikeng and it was unbelievable that the behind all the fog the previous time, lay such great expanse. It was a feast for my eyes and I can’t help but be in awe at the presence of such beauty just a stone’s throw away from the city. The hike down to Xiaoyoukeng was slightly less pleasant because of the pungent smell, incredible nonetheless, since it was my first time getting in such close contact with fumaroles. I learnt that just like hot springs, they are geothermal areas where surface water seeps underground and are heated up. If the water temperature gets above boiling point, they vapourise underground and emerge as fumarolic steam, which is strongly acidic and corrosive.