On the 26th of November 2018, I participated in the Aloha Gebouwenloop of UTwente. Gebouwenloop means building run. The building run is organised every year by the triathlete association of UTwente, Aloha. The entire race is held indoors (they open up some doors so you can run from one building to another). You start from the Citadel building, run to the 3rd floor of the Horst building then finally run 10 stories up to the top of the Horst Tower.

I chose to participate in this race because it was getting really cold in November and I wasnt too sure about running outdoors but this entire race would be held indoors where it would be nice and toasty :3

There various prizes you can win for the race, but the most interesting prize is the best dressed prize where you can come run in any costume and hope that the judges find that your costume is the best amongst all the participants. This time the best costume actually belonged to two people, who came in a identical dog costumes and tied their tails together. I wasnt too sure how they managed to complete the race in their costume lmao.

After the race, beside the normal water and banana, the organizers also provided more unhealthy snakcs like pepernoten (a Dutch spice biscuit commonly eaten during Sinterklaus (6 Dec)) and wine gums (non-alcoholic sweets which are commonly found in Europe, they are called win gums because the gummies have names of different types of hard liquor on them. The gummies are non-alcoholic)

I was very nervous for the race and even tripped whilst running down the stairs since my shoes were very worn down and the floor was very slippery. I’m glad i didn’t come in last and my fifth row (the Athletics Association – Kronos, Utwente calls their version of fifth rows Association) won the association category since we had the largest number of people representing our association during the building run.

After the run, there were drinks in the basement of the Horst building. As is the norm for many events the first barrel of beer or soft drinks is free. So the earlier you arrive and the faster you drink, the more beer you get! (life hax)

All in all, it was a really eye-opening and interesting experience. Due to the small land mass in Singapore, buildings are usually built vertically not spread out. This means that there’s not a lot of space to run in buildings in Singapore. Additionally, people dont really think of buildings as a venue for races so there aren’t many similar building runs in Singapore. I’m glad I participated in this race, it was definitely very worth the registration fee 🙂 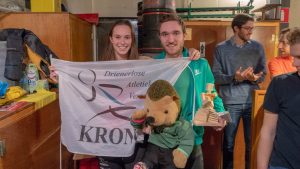 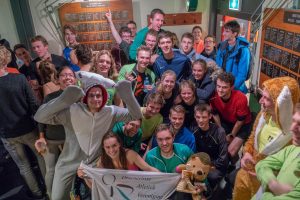