The race was organized in Nijmegen in the Erasmus building. There are several categories:

Having a student card for a Dutch university meant that I was eligible to participate in the NSKs! 🙂 This basically means that I can be ranked against other Dutch students in the results and see where I stand. Since this is my first time participating in vertical race, I chose the 10 floors category. The race was really fast but also extremely tiring, I have never like climbing stairs so running up 10 floors was really tough 🙁 I was ready to give up when I reached the sixth floor but my entire team was gathered there to cheer our team mates on so I had to run to avoid loosing face (lol). Additionally, the ground floor in Europe is floor 0, so that was kind of confusing during the race.

After my race, I stayed around to look at other people race, it was really nice gathering around the staircase and peering down to   cheer other participants on. I also got to look at other categories. It was really fun looking at my team mates dress up for the Relay Category, a group from my team dressed up as Mario an Luigi. Interestingly, instead of using batons to hand off during the relay, leek was used (haha). That was funny but actually really cost efficient and practical. The beer chase was also really interesting! As the name suggest its a relay with beer! Participants have to chug a cup of beer before running up 5 stairs. Surprisingly, no one vomited during the beerchase. After the race, there was a prize presentation ceremony and a nice and warm buffet dinner 😀 The link to the race results was also released and I came in third! (from the bottom) HAHAHAHA 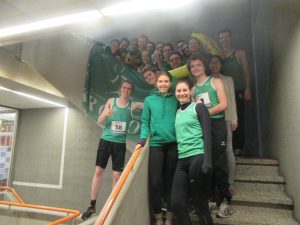 Team picture after the race 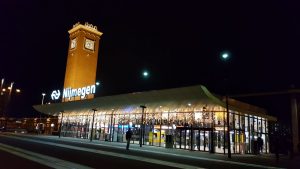 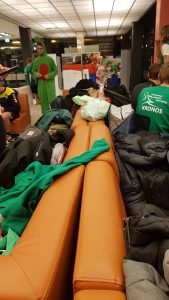 team members chaging into their costumes for the relay 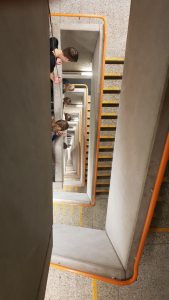 Watching the race after finishing mine 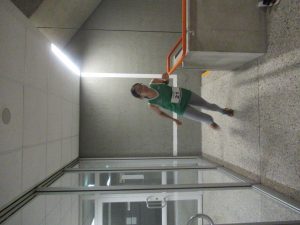 me dying after 6 floors