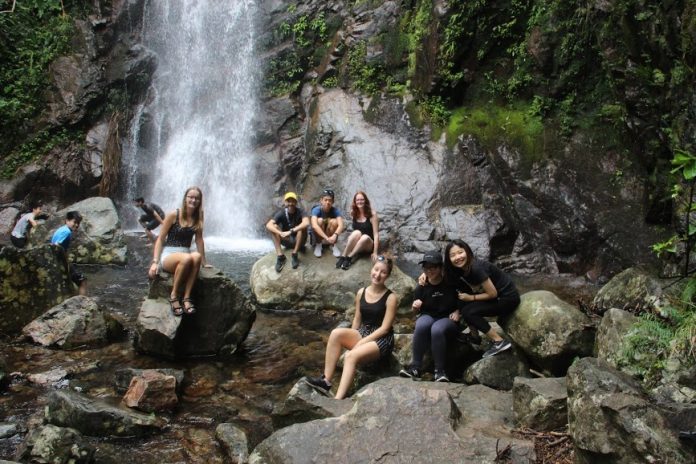 Ng Tung Chai lies on the North Slope of Tai Mo Shan and consists of 4 waterfalls along the trail. Due to the effect of the typhoon, we have to climb over several fallen trees and take extra caution during our hike. In some sections, the path is steep and we have to get down on all four. Hiking within the forest was especially cooling that day due to the shading provided by the tropical trees. The hike to the 4 different waterfalls – Bottom Fall, Middle Fall, Main Fall and Scatter Fall, feels like an adventure with pleasant surprises at every turn within the woods. My favorites are the Middle Fall and the Main Fall.

Our Hike was supposed to end at the 4th waterfall but on our way back, we saw a signpost that reads 45 mins to Tai Mo Shan. Tai Mo Shan is the highest peak in the whole of Hong Kong at 957m. Since we were already at 500m above sea level by the end of the 4th waterfall, we decided to push on to conquer the peak. As we get nearer to Tai Mo Shan, the area became more exposed and sunny. Even though we did not managed to reach the 957m peak, I still felt a great sense of achievement that day especially when the hike towards Tai Mo Shan was impromptu. On our way back, we took the same path and ended at Ng Tung Chai village where we started from.

Since it was also National Day, we decided to proceed to Tsim Sha Tsui to see the 23 minutes firework displays that started at 9pm. Similar to the situation during mid-autumn festival, several roads were blocked to direct the human traffic. At 5pm, many people were already at Tsim Sha Tsui Clock Tower just to get a good viewing spot for the fireworks.