Yes! Week 3 and I’m going to Jeju-do! No such thing as too much travelling!

Jeju was a complete escape from the city, an island twice the size of Singapore set aside for nature.

First day, we visited two craters! First, was Sangumburi Crater, which presented a vast field of silvergrass before the crater itself. While the silvergrass were still green, it was a lush sight and a peaceful walk up to the crater. The crater itself is covered in vegetation, a large indent in the ground, a remnant of an extinct volcano.

After that, we stopped by myeongjin jeonbok abalone restaurant, supposedly the best restaurant in Jeju. The restaurant only serves 4 items. Per our host’s reccomendation, we got the abalone rice and the grilled abalone. The abalone rice (10,000W) was served in a clay pot, with the rice mixed with pumpkin and slices of fresh abalone. The grilled abalone (30,000W) came with 11 sizzling abalones to feast on. Furthermore, this is possibly the only restaurant where mackeral is served as a side dish (not free flow though). Needless to say, this was a FEAST.

After the best meal in Jeju, we headed to sunrise peak, Seongsan Ilchulbong. This was a 20 minutes hike up to the view of the crater which was really worth the climb. There were many other korean tourists with us. Off the side of the crater, there’s also a small restaurant owned by a couple of Haenyeo, the Jeju female divers. They do demonstrations for free but unfortunately, the waves were especially choppy during our visit and hence, it was called off. The Haenyeo are living proof that your grandmother can be fitter than you. They were a lively bunch, selling their octopus and shellfish along the coast of a cliff.

On the second day, we visited the south city of Seogwipo. There, we visited the Olle daily market where we tried some black pig kebabs, jeju oranges, and bought some hallabong makgeolli and marinated raw crabs to snack on. These are Jeju specialties and definitely worth trying!

For dinner, our host brought us to have Galchi Jorim, Cutlass fish braised in a extremely spicy yet extremely flavourful stew. This dish is the definition of shiok. The stew came with four big chunks of cutlass fish meat which was tender. However, bones line the sides and middle of the fish which definitely demands patience. Still, the reward was worth it.

On the third day, Typhoon Tapah wrought its rain upon Jeju and it poured heavy throughout the day. Hence, we went to manjanggul cave, a 1km walk through an underground lava tube. Underground, the temperatures dropped to 14 degrees and water dripped through cracks in the ceiling above us. The cave was dimly lit and an occasional draft swept through the tunnels now and then. It was certainly an atmospheric experience and one can easily lose track of time in the caves.

On the fourth day, Typhoon Tapah was closest to Jeju and so we stayed in, while strong winds and rain surrounded us. Thankfully, we were the winds died down in the night and our flight wasn’t cancelled! We thanked our hosts, and got on our flight back to the city. 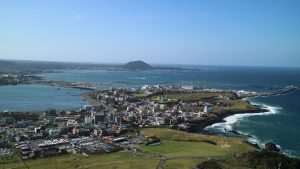 Spending 4 days in Jeju was an experience of the slow life, and of a natural place. We take for granted many things: the speed of city life, our natural inclination to nature, Singapore’s freedom from natural disasters. Yet, Jeju was not all green and cheer. Jeju also was a city of protest against urbanisation, and an aging city suffering deep cultural loss. Still, there is beauty in that too.