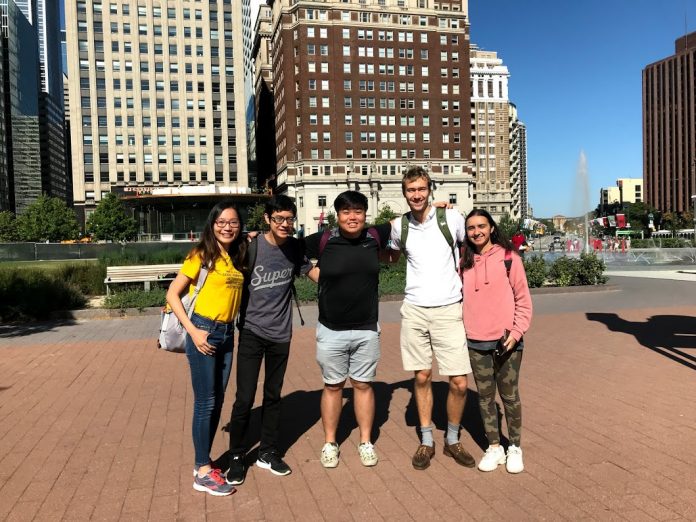 After 3 weeks of orientation and school, we finally had our chance to go beyond the borders of Lehigh University. With a chartered bus provided by one of the clubs in Lehigh, JunJie and I (Nicholas) set off on a day trip to Pennsylvania’s biggest city, Philadelphia.

We took advantage of the fact that it was CollegeFest, and in true Singaporean fashion, we got hold of as many free stuff as we could. Ikea bag? Check. Free speakers and power bank? Gotta take both. Indomie? A hungry student has to do what one has to do. The Ikea bag was certainly useful to haul the free loot we attained from the rather generous sponsors. This also meant that certain museums were free on the day we visited Philadelphia!

One of the highlights was certainly the Liberty Bell. It is a symbol of America’s freedom and independence and thus rather iconic. It also coincidentally appeared as a case problem in our 30.001 Structures and Materials class. JJ and I took a moment to reflect on the propagation of the crack, and how many more EPD students will have to think about it.

We also went outside the Independence Hall, where the constitution of America was signed. The whole area was rather historic, with so many of America’s early milestones happening right before our very eyes. I wish I had more time to see and visit all the historic buildings surrounding me, but there was only so many museums we could cover!

In our rush to maximise our day, we had a quick look at the Franklin Institute, which was their Science Museum. It had some intriguing exhibits, particularly those in the aerospace section. It was cool to see the visual presentation of certain aerospace concepts, and of course, sitting on a fake plane, because why not!

At the end of our trip, we made it to the Philadelphia Museum of Art. It was made famous by the movie Rocky where he famously ran up the steps of this museum. We certainly made our own attempt at running up these fabled steps, and it was best that no videos were recorded of said attempt!

It was definitely a worthwhile trip, even if it was only a day. We managed to see the most famous places in Philadelphia and more importantly, enjoyed the company of our international friends that we went on the trip with!

Pro-tip for students going to Lehigh: Always check your Global Lehigh emails! There are often good deals and cheap trips to take advantage of! We only had to pay US$15 for the bus ride when it would have normally cost US$40+!