In Taipei, it seems like nearly everyone knows how to ride a bike, and most of them do so on a daily basis. There are several factors that promote the bike culture in Taiwan.

Firstly, cycling is faster than walking. ‘Duh’, one might say, but this obvious point contributes to why people would want to cycle in the first place. 20 years in Singapore and I have never felt as strong an urge to get a bike as I did two weeks in here.

Next, the presence of lanes for cycling and abundance of parking lots. This isn’t true everywhere in Taipei, but it is at least true for the area around NTU. Parking spaces are available almost everywhere in school, making cycling a really convenient mode of transport. Also, the fact that the main road in school is wide enough to accommodate a fleet of student cyclists helps with the convenience in getting around with a bike. 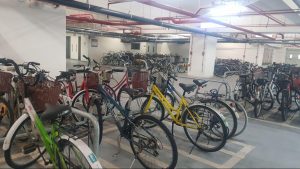 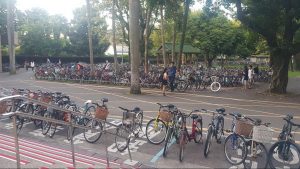 Another point that adds to the number of people who cycle is the presence of ‘Youbike’ stations around Taipei. While they aren’t the most convenient, since one has to stop at a ‘Youbike’ station to end a trip, they are still a good option and rather popular. Around 10am in the mornings, the two stations (that’s at least 30 bikes) near the school entrance would be empty, as most students would have rented one and parked it at another station near the other end of the school.

Lastly, there is a virtuous cycle going on in the cycling culture in Taipei. As more people cycle to get around, more people are exposed to the notion of cycling as a good mode of transport. This means an increase in the infrastructure and policies encouraging cycling (cycling lanes, bike parking lots, allowing bikes on metros – this would cost much more than the normal ticket, so I wouldn’t do it – etc).

There might be much more behind the cycling culture in Taipei, but the above are just some of my opinions. This article acts as a prelude to the actual article I was going to write — Getting a Bike (for an NTU student), so keep a look out if it’s relevant!

My one regret from my SUSEP experience

My onboarding experience at NUS (with some ModReg tips!)