Alongside with Yeoksam global village center, I helped out at a kimchi making event for charity.

The event started early in the morning and we gathered around 8.30am. The event was held outdoor and it was pretty cold. We were provided with apron, gloves and other necessary items.

The cabbage was seasoned with salt before hand and our role was to apply the gobchujang sauce onto the cabbage themselves. It was interesting to be part of the kimchi making event and to learn more about how kimchi is made.

There was also other foreigners participating in the events and many of them was making kimchi for the first time too. After the event, we were also offered kimchi. We can get a small box of kimchi that we made if we want to. I choose not to take it as it would be too much for me to finish it by myself and it would be a waste if I had to throw them away before I go back to Singapore.

After making kimchi, we were also given lunch. I think it is some sort of traditional lunch prepared by the ahjummas. 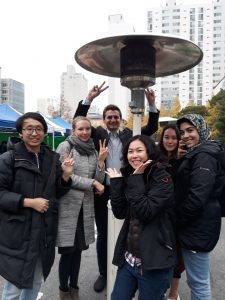