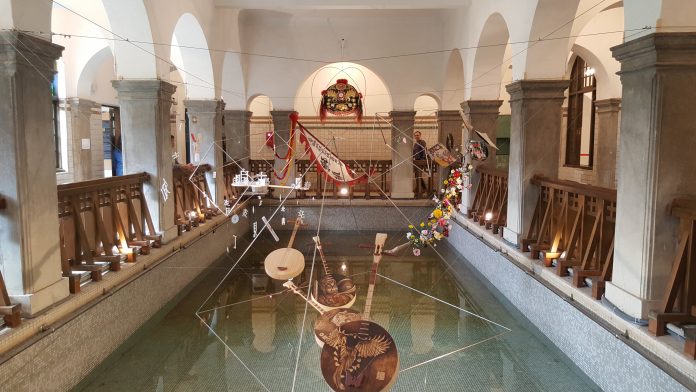 Beitou is an interesting town. Built upon a volcanic depression, the town has many hotsprings and is geothermally active. It’s a fascinating place to be in. The area possesses an interesting mineral unique to the region which is Hokulite. Hokulite is a mineral of sulfur-barium-lead, and is radioactive. Beitou has an interesting history, in the past it was known as the Hollywood of Taiwan as many films were filmed in the district. Towards the 1990s, due to mining operations and neglect the streams had became polluted and through intensive cleaning efforts the area was revitalized as a tourist attraction.

There are a few main attractions in Beitou. There’s a strong Japanese influence in the area. The usage of hot springs only became popular upon the arrival of Taiwanese and Japanese people. In the past Aboriginal people of Taiwan avoided the hot springs. One nice area is the library at Beitou, it has a really unique architecture and is really nice to look at. There’s also the rustic train station that had been refurbished into a mini museum.

There’s a former public bathhouse that now serves as a museum. It derelict for a period of time as it became unused. Through renovations the place had became an interesting attraction to see and understand the history of the region.

The next main attraction is the volcanic depression that the region is famed for. It’s really a sight to behold. I couldn’t stay in the area for too long. The steam was rather acidic and stinged my nose quite badly. The water in the volcanic depression is really hot and acidic, around 100 degrees C and at 1.1-1.5 pH if I remembered correctly. You will probably die or get serious burns if you do accidentally fall inside the depression.

Further up from Beitou you can pass by a path and proceed towards a region near Yangmingshan. There’s a secret free hotspring by a former sulfur mine where you can soak your feet for free. While I could have gotten a taxi or uber, I decided to walk because I felt adventurous on that day. This was a pretty fascinating place to be in. It was quite enjoyable to soak my feet in the hotspring after the long walk. Be careful not to leave your feet in the water for too long as you might get injured.

This trip to Beitou was really enriching and entertaining. I enjoyed my time here. Do come over if you ever pass by Taipei.

Check out my social media for interesting stuff