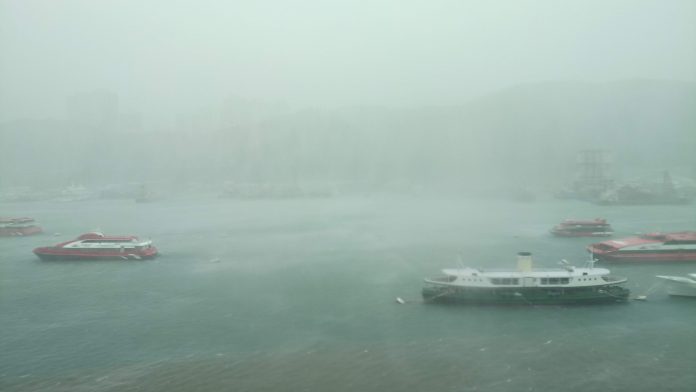 Prior to the arrival of the storm, warnings were issued to remind people of the need to stockpile sufficient food and water supply to last through the storm. The local government also set up additional flood-control measures at low lying villages to assist locals in protecting their homes.  One practice that I find interesting was the pasting of tapes in the shape of 米 on the windows of the residential homes. According to the Hong Kong Observatory, the tape may be able to reduce the effect of vibration and prevent the windows from shattering. Hence as compared to the food and water, what ran out the fastest was actually the masking tape. Some of the locals even referred to the usage of tape as a talisman charm to seal away the Mangkhut. Putting aside the tape’s effectiveness, I find this practice to be rather novel.

On Monday, directly after the storm, the working population have to resume work again. The situation at the MTR was rather chaotic since several lines had ceased operation as a result of recovery effort. Major road blockages occur as tens of thousands of trees have fallen all around Hong Kong. Classes were cancelled on Monday in consideration of the congestion and safety of the students. While the road situation was rather severe, I was quite impressed by the efficiency of the clean-up effort. By Tuesday, the city was already capable of resuming its operation.

Throughout my life I had never experienced any form of natural disaster. The storm exposed me to the wrath of Mother Nature and the effect of adverse weathering conditions resulting from global warming. What strikes me most was the citizen’s enthusiasm in assisting in the clean-up and humanitarian effort after the event. While searching for a possible hiking trail with minimal damage, I happen to chance upon an online google spread sheet where the public is able to share publicly the conditions of the hiking trails. Some of them even helped in clearing of the fallen trunks and branches along the way to minimize hazards to the hikers. I really appreciate their effort and the information they provided.