This week is the Chuseok, the mid Autumn festival in Korea, which is widely celebrated. The holiday lasts 3 days and lines up with the weekend, which gives us 5 days of break, prime opportunity to take a trip out to a place far away, like Busan.

During the Chuseok holiday, the Korean students head back to their hometowns for a reunion dinner, very similar to Chinese New Year. My Korean buddy said that since Korea is a patriarchal society, usually the women do all the cooking and the men just drink and eat. During this period, the traffic outside of Seoul will be very congested, so it is better to take the train if you are planning to head somewhere (The train prices are fixed, even on holidays!). I recommend the Mugungkwa train, which is an older model. It may not be as fast as the KTX bullet trains, but it is considerably cheaper. It only took 5 hours to reach Busan.

Our accomodations were location at Gukje Market, and at the time we did not know that this was a very good location to get around, we could literally walk to 4-5 tourist destinations alone. 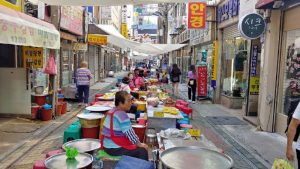 Following the Korean War, refugees who fled to Busan set up stalls in order to make a living, and this was the beginning of the Gukje Market (gukje meaning “international” in Korean). The Gukje Market is one of Korea’s largest markets; each alleyway is crowded with stalls, and it connects to Bupyeong Market, Kkangtong Market, and other smaller markets.

To be honest, there is nothing much to buy here as a tourist. But if you are looking to go shopping, right next door is BIFF square, the shopping district of Busan. BIFF Square holds the Busan International Film Festival every year in Autumn, so if you have some time on your hands, you can go check that out. Not only that, there are many famous food stalls and street vendors to feed your stomach while you shop. You can find many branded goods here such as Puma, Adidas, Champion, etc. If you are here during the Chuseok period, make sure to check this place out as the outlets usually have holiday discounts.

A! Journey in Three Parts