So far every weekend we’ve gone out of Enschede. It’s not a very big and interesting City (the farmer’s market on saturday was really cool, but it’s like visiting the wet market in singapore in better weather – after a while it gets tiring and you just want to get your groceries and get out)

The Netherlands is a really nice place – I was sending people pictures of Germany and they pointed out that it was all urban. A lot of my photos of the Netherlands are in parks and gardens. Maybe I just haven’t been to the right cities in Germany.

Last week we went to Oktoberfest! Enschede has a lot of drinking culture from Germany, since we’re pretty much on the border (the SUTD people are cycling into germany for lunch in 15 minutes). Meaning a lot of beer, though i think that’s also pretty much become a Dutch thing itself. But the beer at Oktoberfest? you get it by the liter. Most beer I’ve drank, and the nicest buzz I’ve had. Normally beer makes me uncomfortable but maybe it was the food or the atmosphere but it was great and lighthearted, even if we had to wake up at 5am to queue for the beer tents (and then make a mad sprint for the tent once the gates opened) 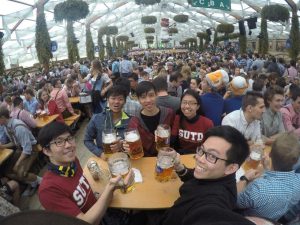 The beer tents are basically wooden halls. We talked to a bunch of locals who told us that that tent (hofbrau, for the next batch of UTwente exchange students…) was the best (and Munich had the best beer in Germany). They’d been to Oktoberfest every year for over a decade, apparently. It was hilarious, they just sat around and ate potato salad and didn’t even bother looking at drunken fights. When one broke out i pointed it out and one of them just shrugged and said “one minute. security will be here.” and sure enough they did. 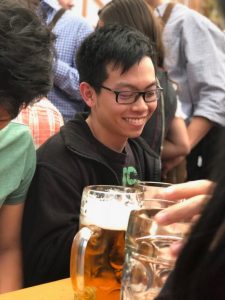 They also have this thing where they make rows of white powder and snort them. It’s not actually cocaine but definitely looks like it – it’s peppermint snuff. Unfortunately I didn’t get a container of that stuff. Mornings were exceptionally cold and I caught a bit of a cold.

On the other days in our trip to Munich we also went exploring – this is a park created to be like an english park. 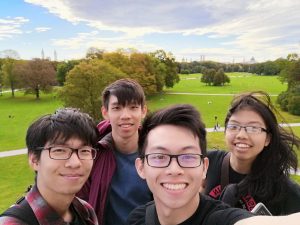 There were people sunbathing and there was a canal rigged up for people to surf in, which was really cool. 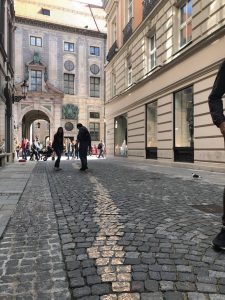 School work was intense when we got back, but eventually we got through it in between all the cooking we’re doing and planning of future trips. The farmer’s market yesterday had a ton of cool stuff too – most of this meal was from there and it only cost us maybe 16 euros? Cooking every day is one part of this exchange I’m definitely enjoying. 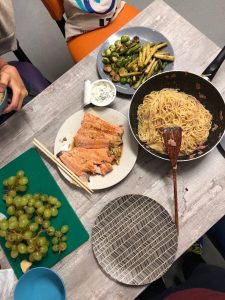 And with that I’ve got to rush down to meet the other sutd people for our (bike) trip to Germany. looking at the pattern maybe I’ll be back in another two weeks \o/