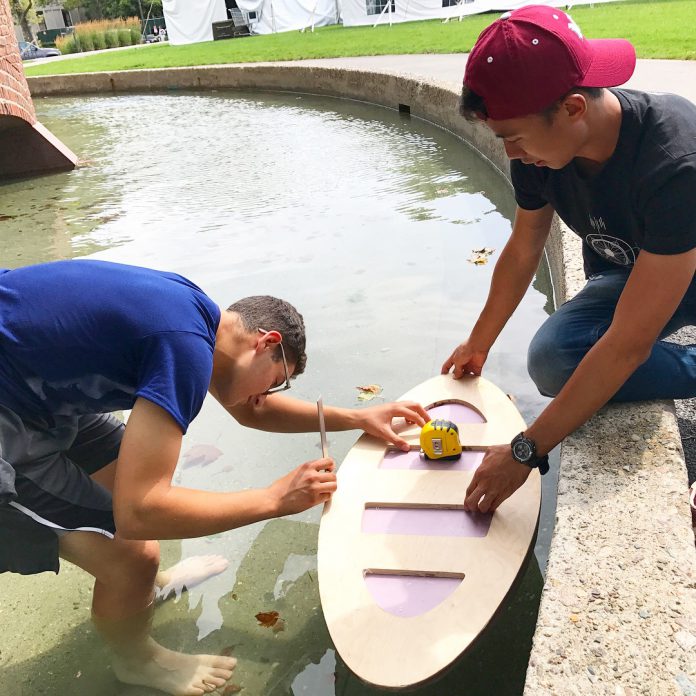 As all 4 groups gear up for the the biggest milestone of our boat building process, the Float Test, the preparation filled with frantic filling of holes in the hulls, sanding and epoxy-glass (epoxy and fibreglass) of foam parts to hair filled with pink panther foam bits and clothes splattered with harden pieces of sadness (dried epoxy).

Our LOBSTER TEAM with a 3 hulled boat, also called a Trimaran, is shaped in the form of (obviously) a Lobster with its side hulls as pincers and stablising hulls. 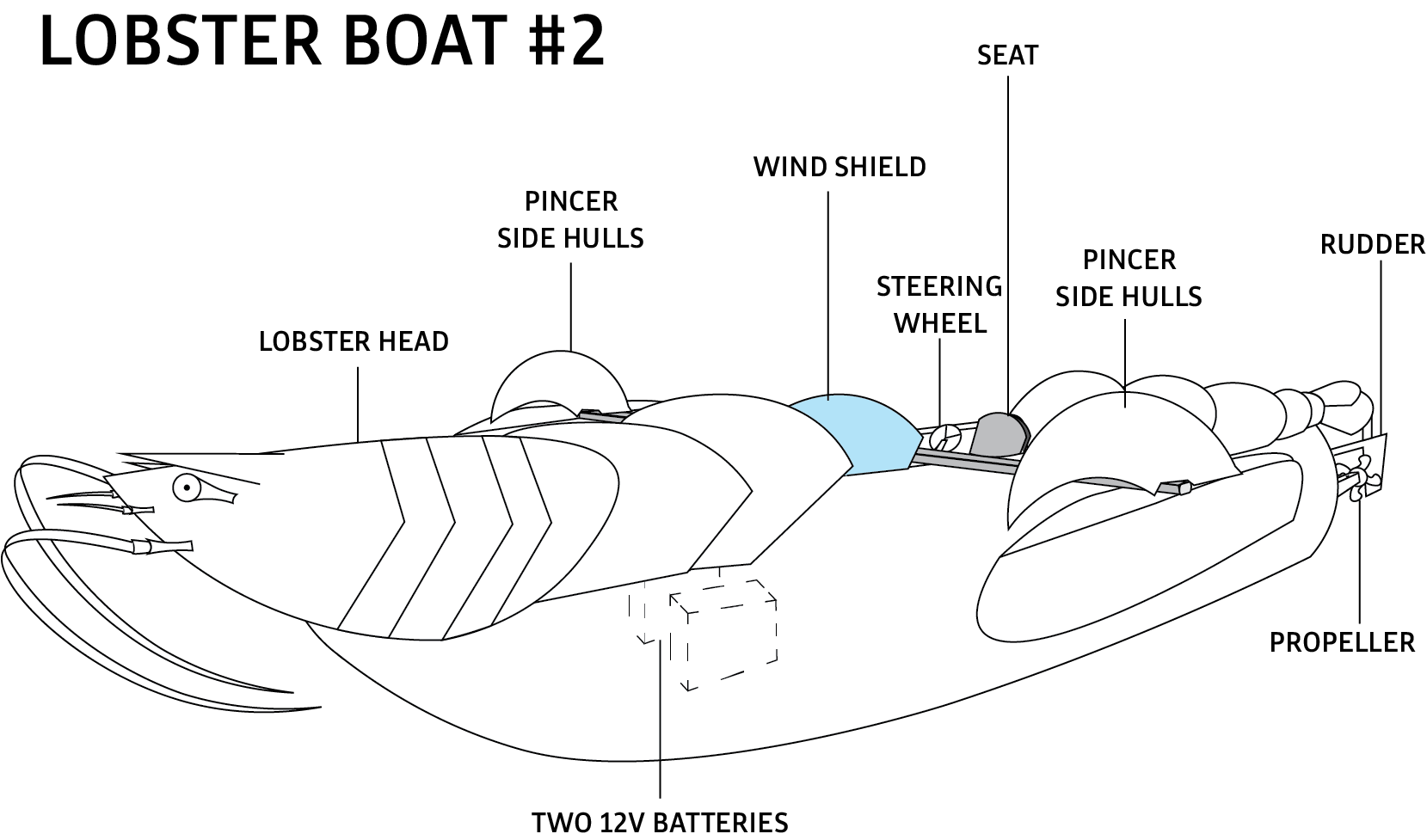 A simplified scheme of our boat! 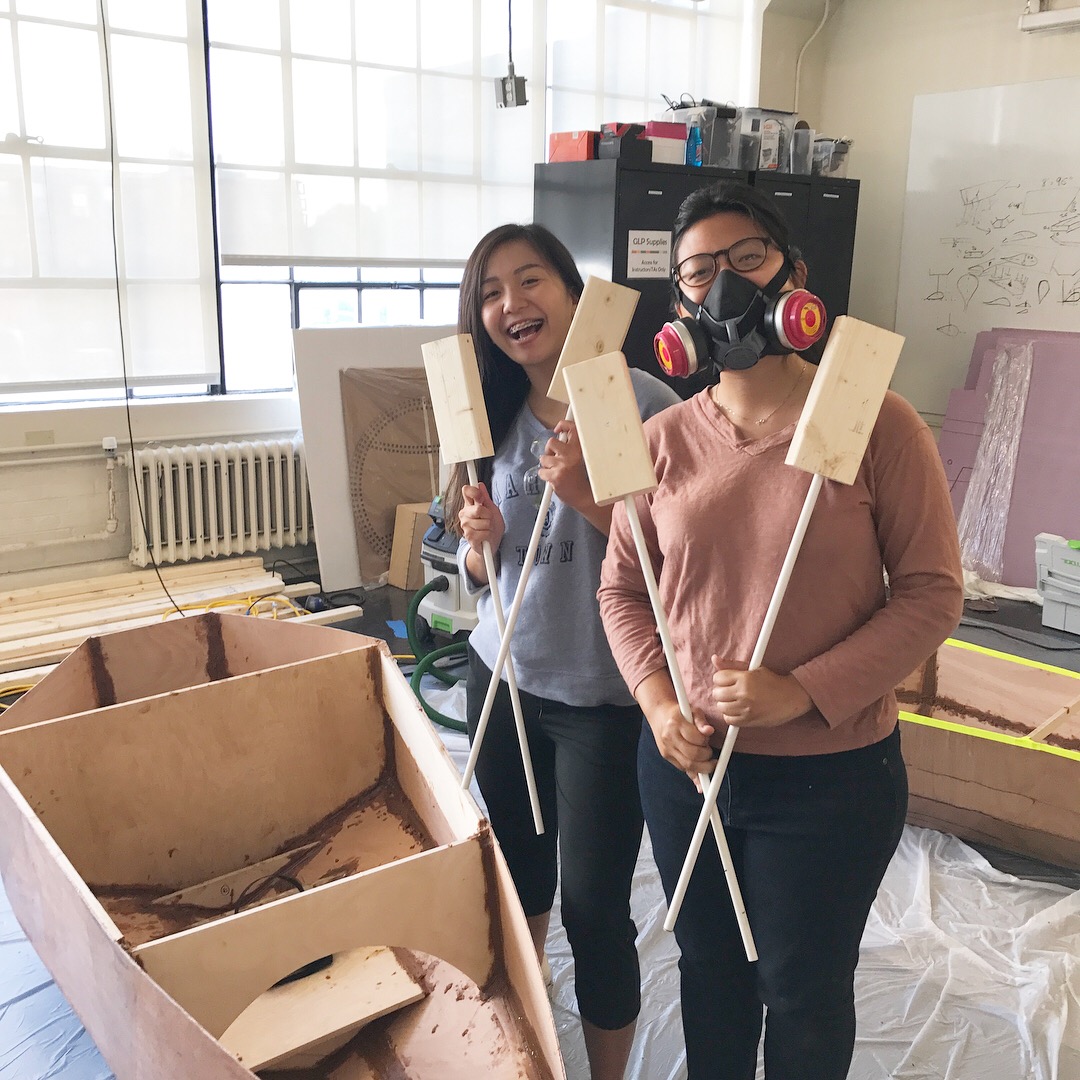 Lobster’s Yeeting & Dorette (daughter and mother) holding onto wood lollipops on fibeglass rods to be used for side hulls attachment. 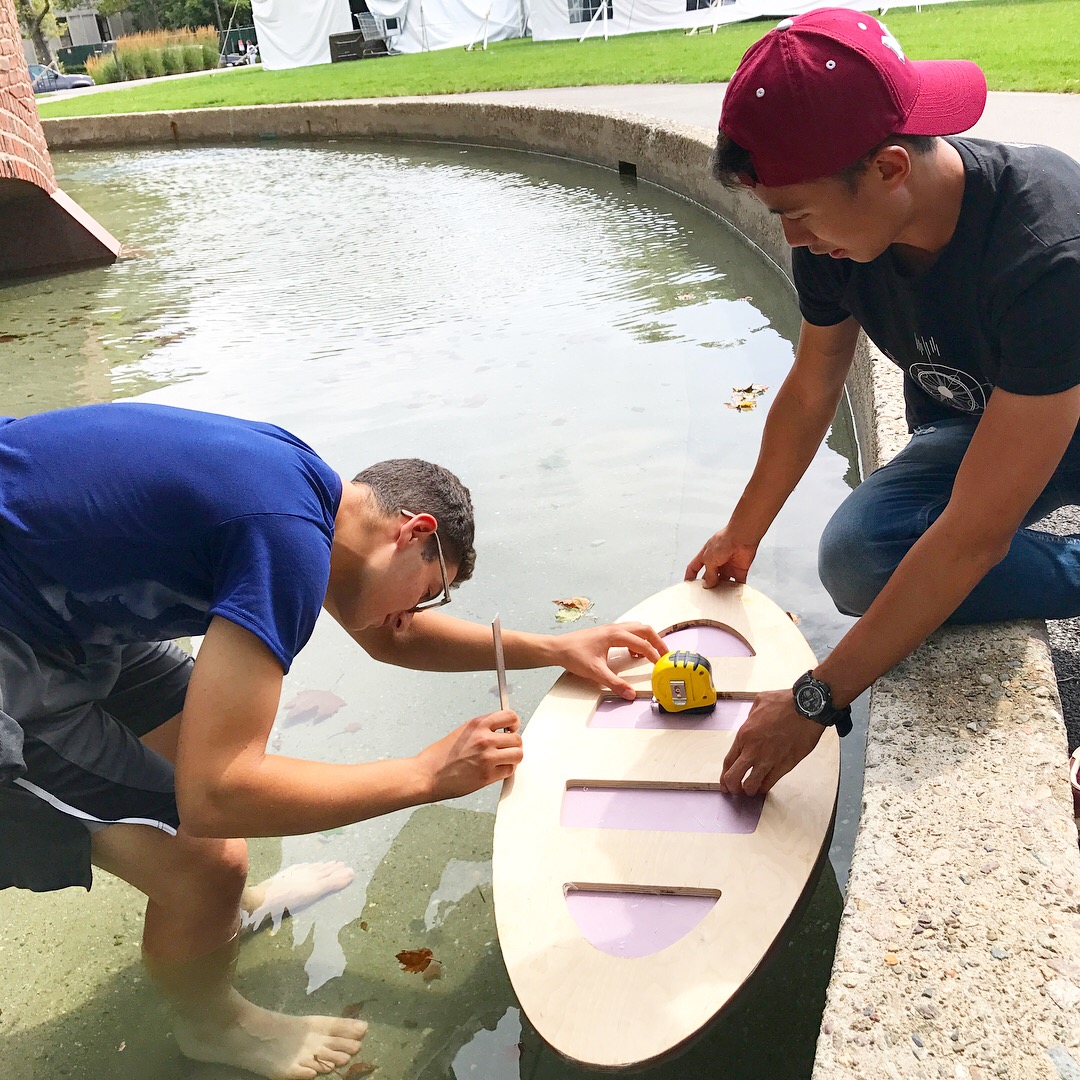 Nate and I using the small pool beside the MIT Chapel to measure the waterline of our mini sidehulls. (secretly also hoping to be blessed by its holy water for a smooth float test!) 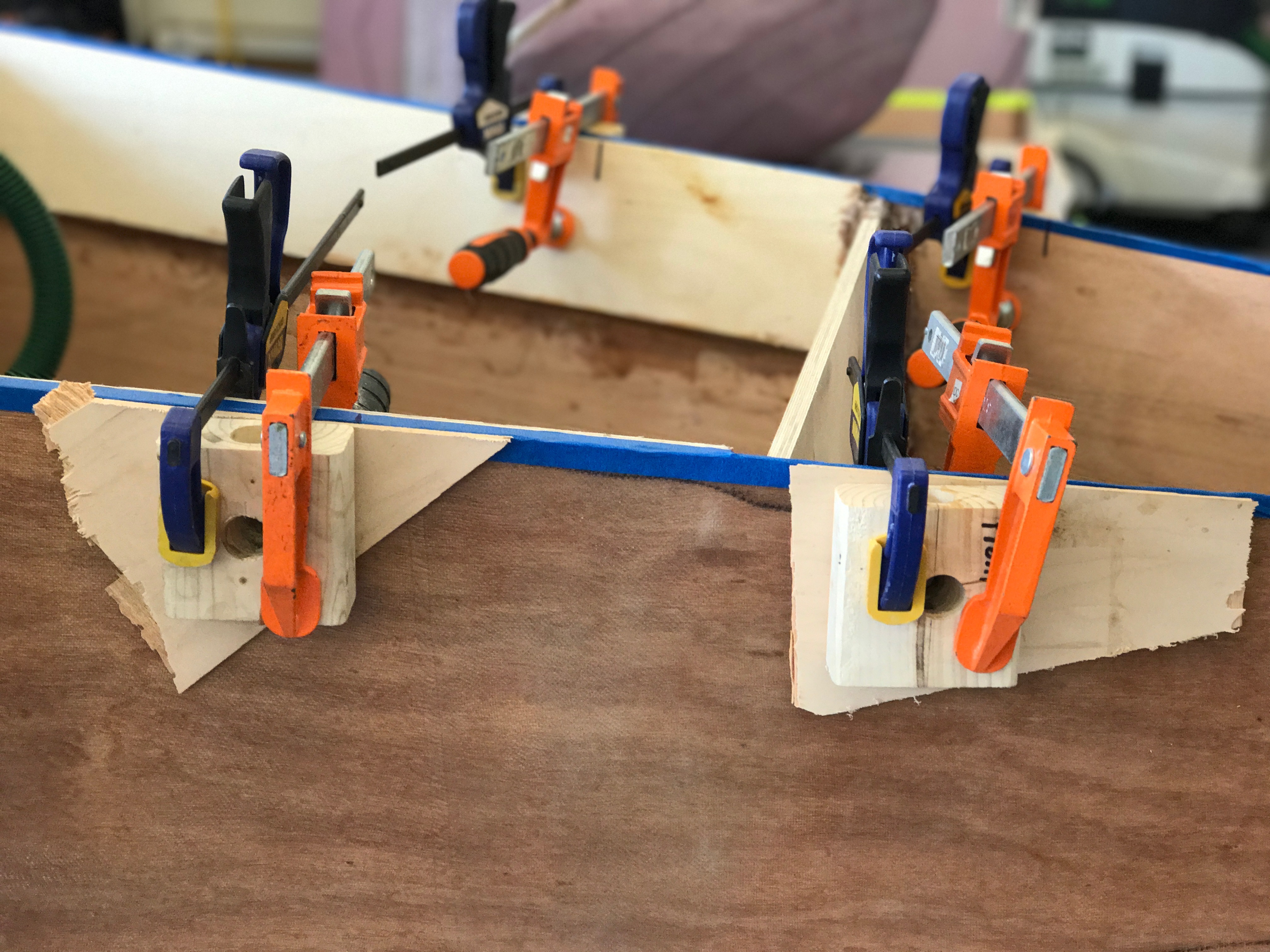 When theres no time to attach stuff, everyone clamours for the clamps, wishing and hoping everything holds together during the test!

Then THE day came as everyone excited pushes all our half (because incomplete) pride and glory towards the MIT Alumni Pool beside Ray and Maria Stata Center, an iconic and funky building designed by Frank Gehry for MIT as below!

Really an eclectic mix of shapes and textures, compuzzlingly fused but creating interesting pockets of spaces where light enters unexpectedly. 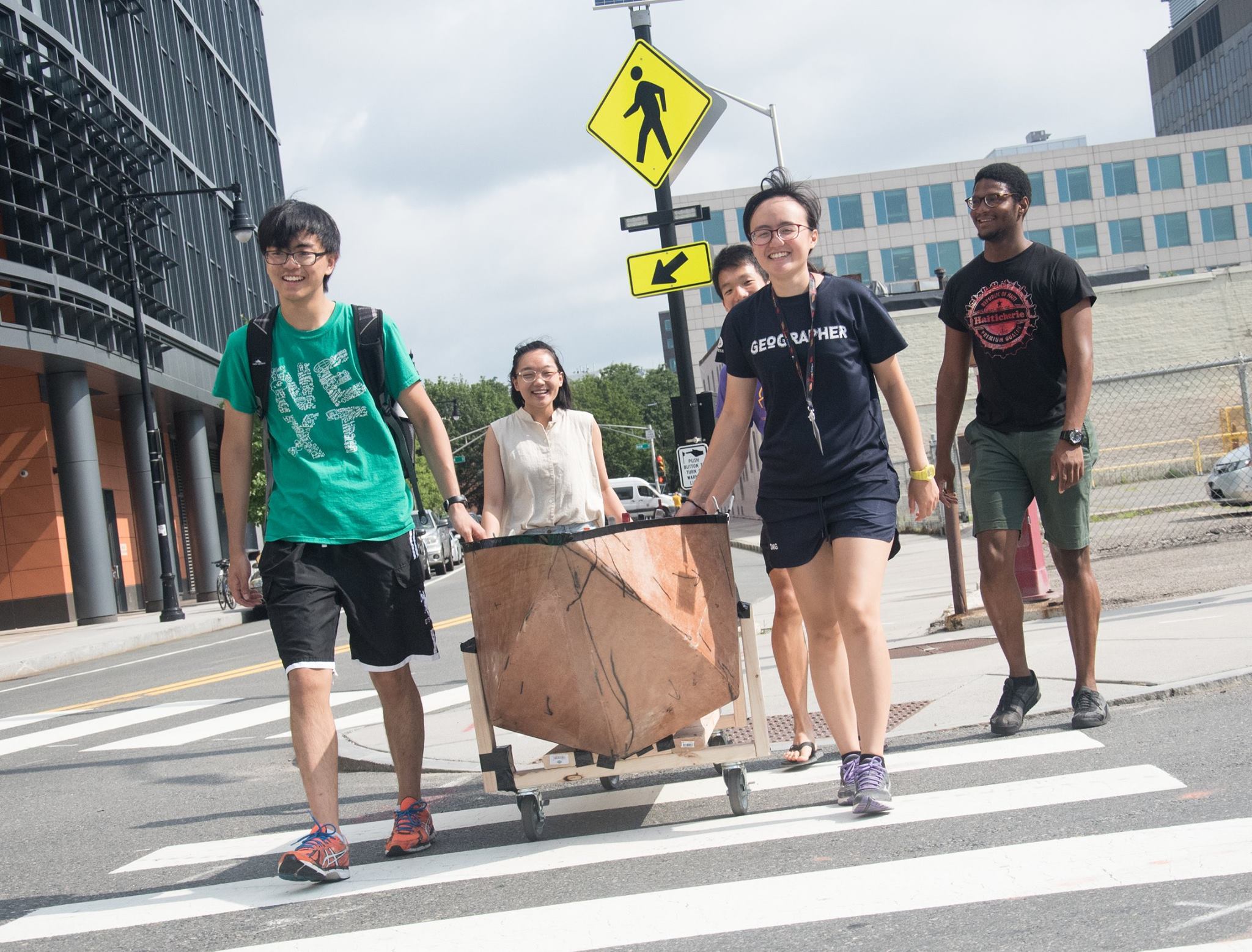 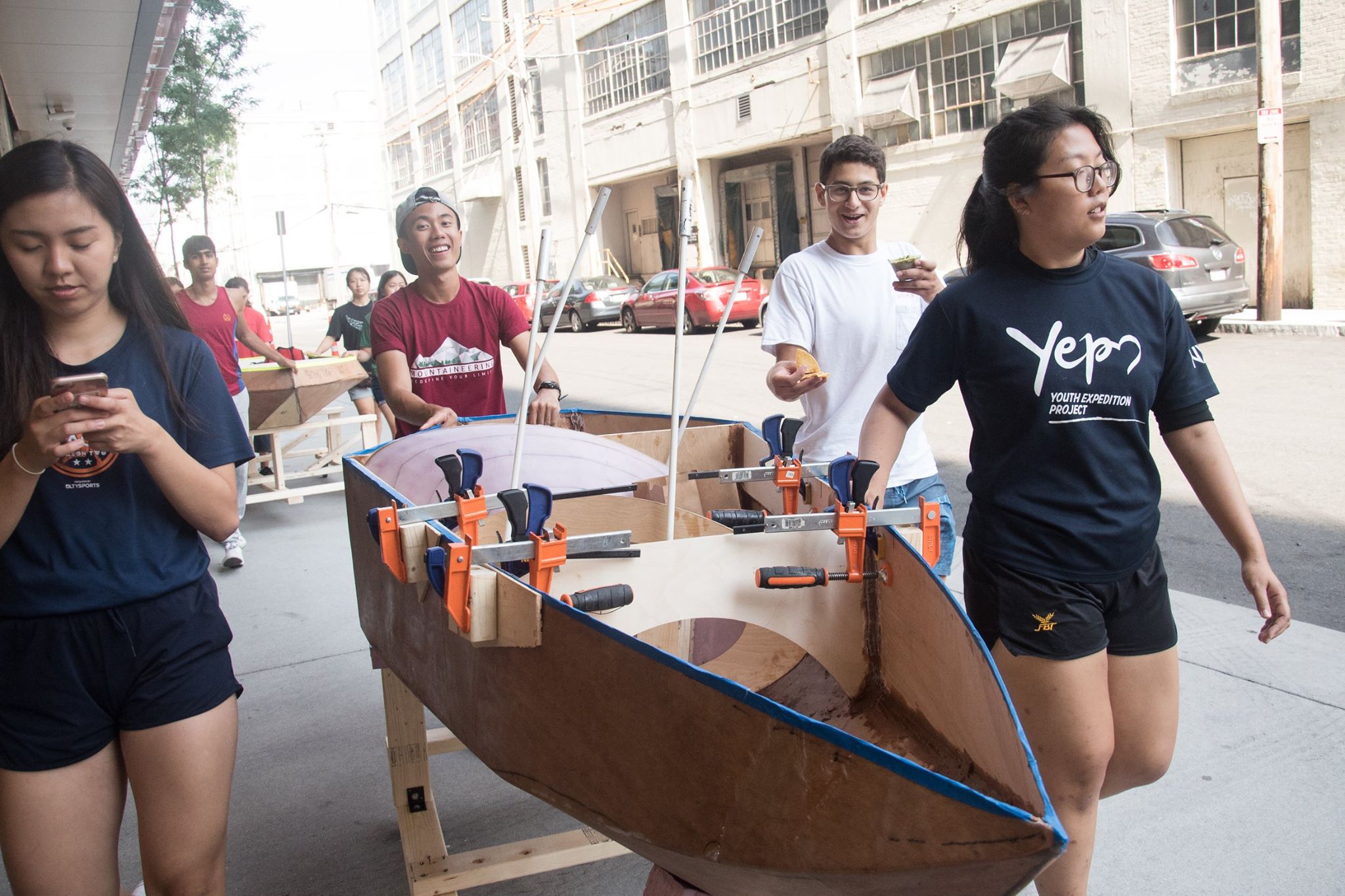 Team Lobster, Yeeting (as always on the phone…), me, super excited Nate and calm like the pond Dorette! 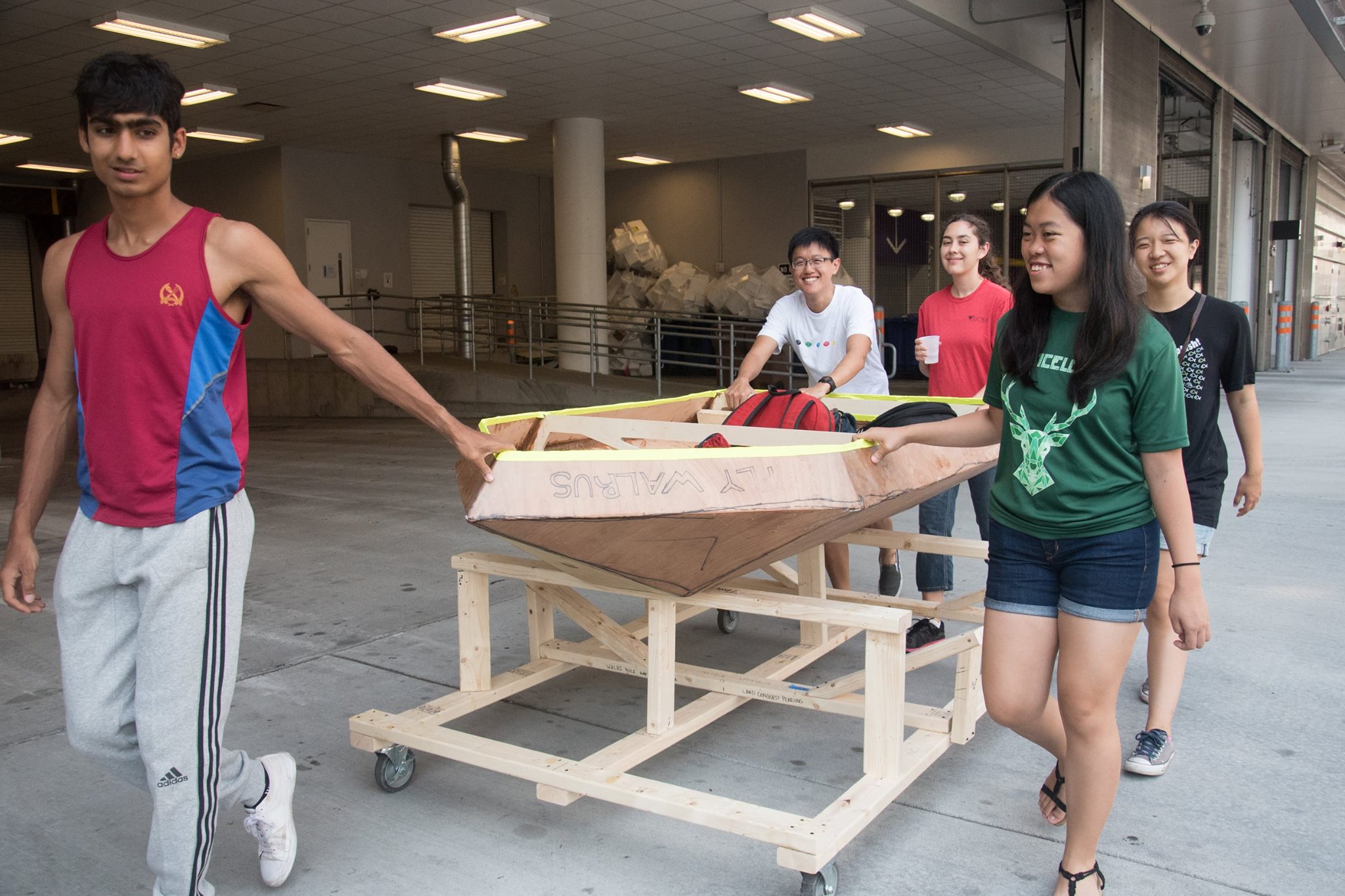 Soooooo into the water we go! 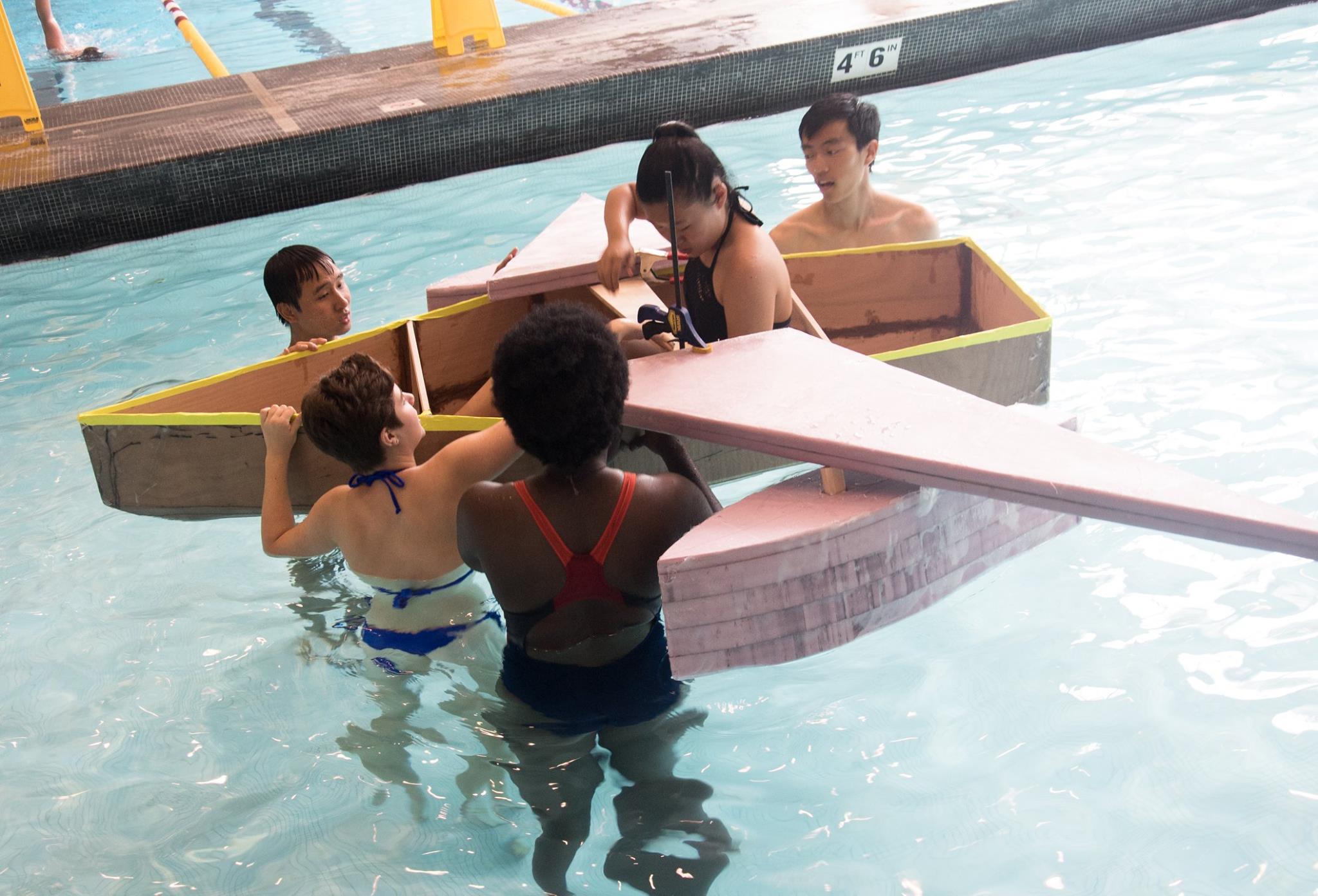 Team Squid, Guo Xiang, Jing Yu, Jinny and Stephanie with their TA Anya as they gather their boat together, styling those airplane wings to soar through the waters! 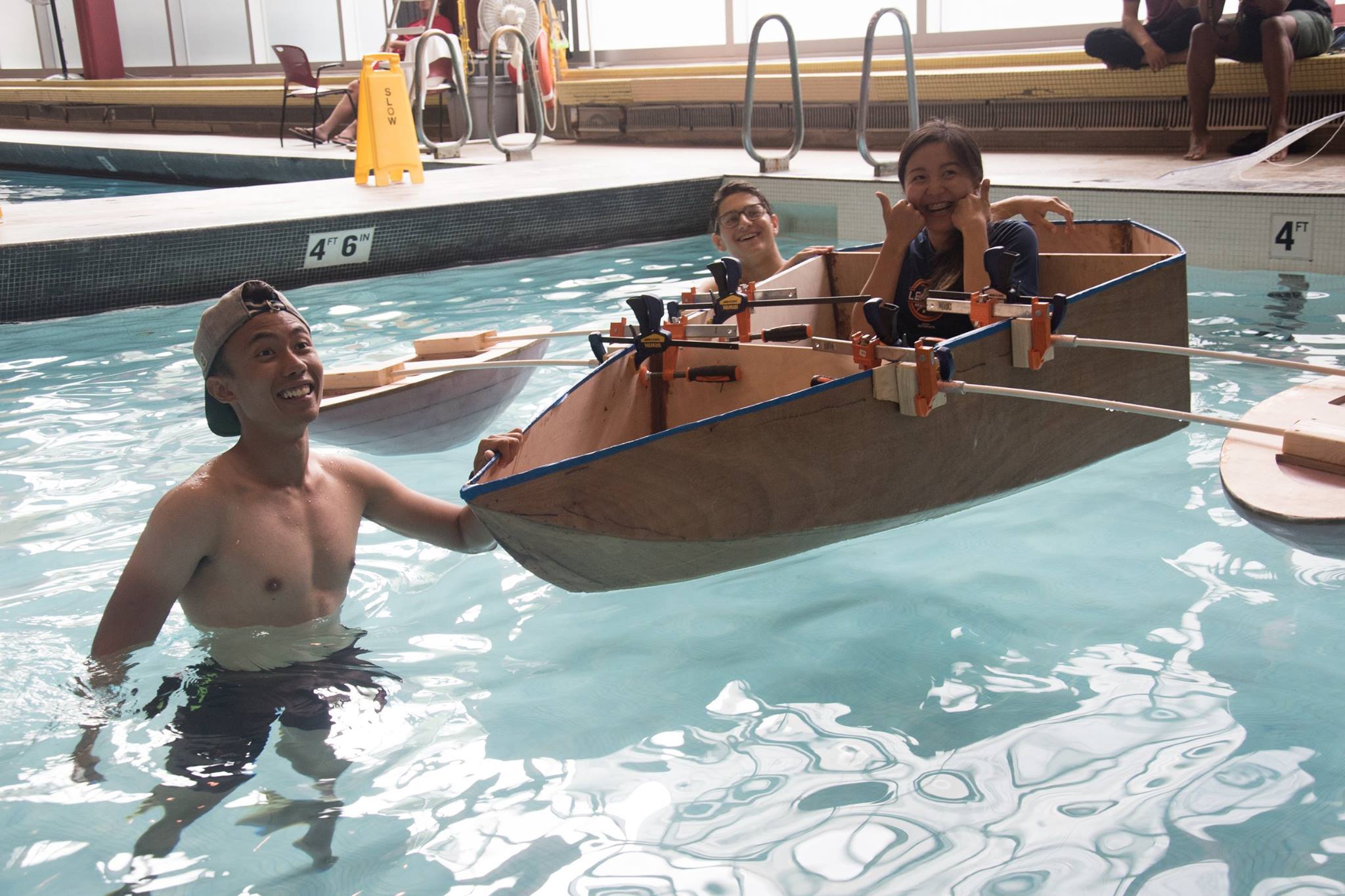 With semi-afraid Yeeting on board as Nate and I moved the boat along! So glad that our boat was so stable and resistant to toppling!

The Float Test was meant for us to determine firstly, the Stability of our boats, secondly, whether the Mass Distribution on the boat will affect its Stability and thirdly, the Rough Approximation of the Waterline of our boats. So part of the test involves us Rocking the boat as hard as possible in all directions and letting go to see if it can survive the “choppy” Charles River.

Nerve-recking moment for me as I was so afraid the clamps would give way, but thank goodness it didnt! (must have really been blessed by the holy pool!) 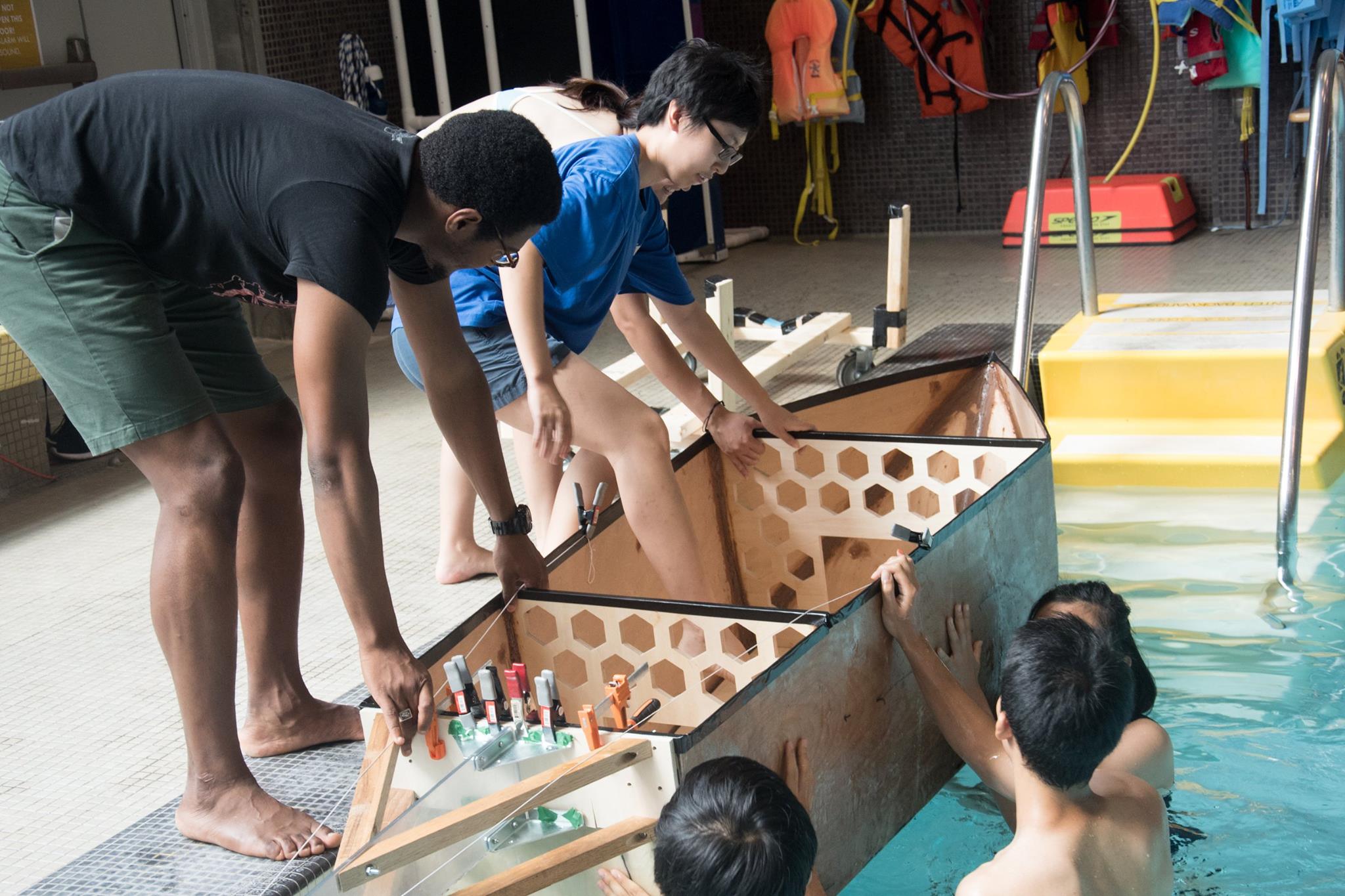 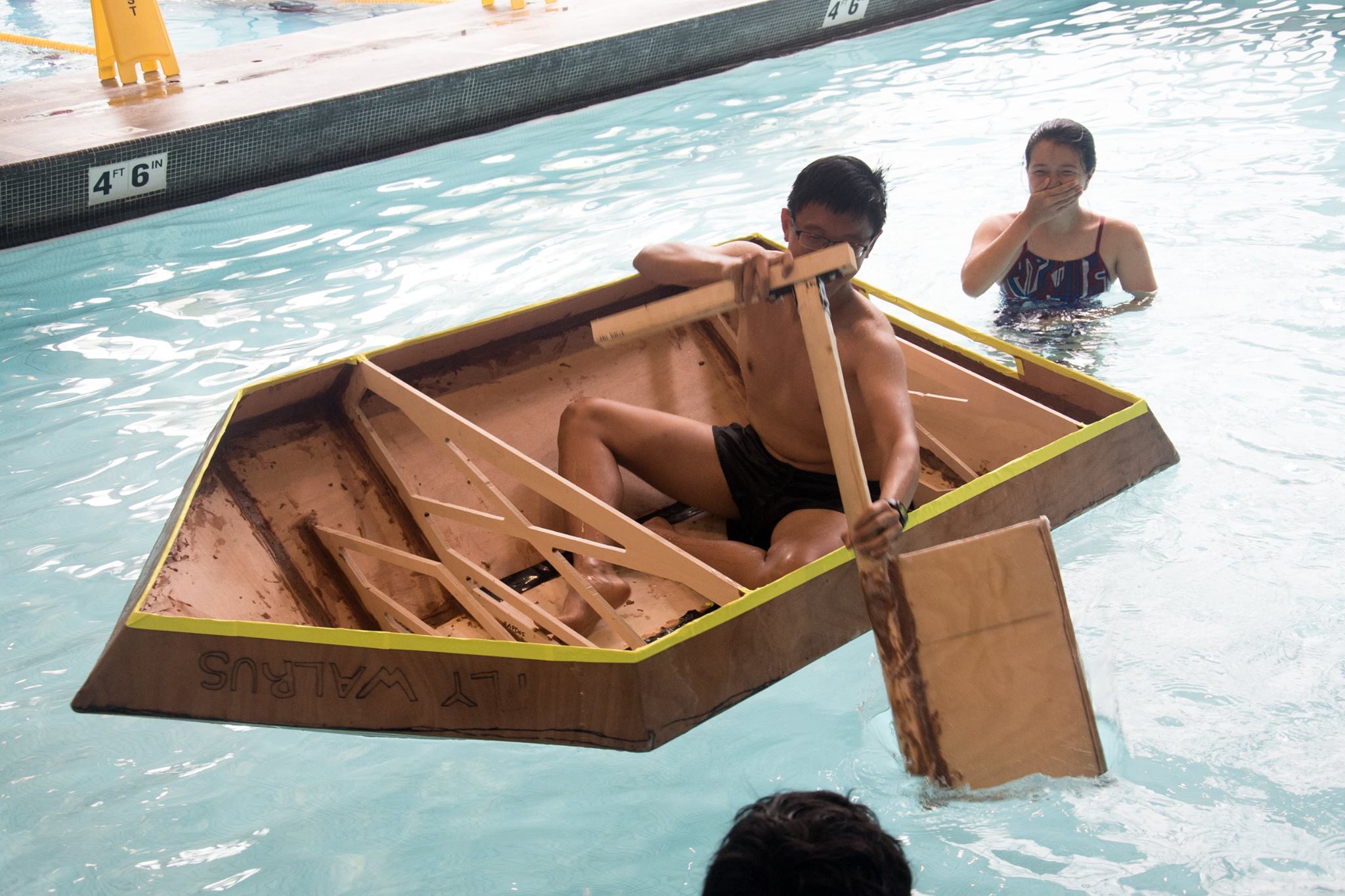 Tze How putting his Wilderness Trip Canoeing skills to good use as he uses his rudder to paddle around in his group’s up and coming Hydrofoil Boat!

After the test, with new insights of each of the boats, we returned to the IDC to continue tweaking and working on improving it as we press on for 2 more weeks until Race Day!

But before that, Rayson and I took a much needed getaway to Maine, Acadia National Park (~4.5 Hours drive from Boston) and it can be summed up with a few emotions; Excitement, Puzzling, Fun, HOLY HELL WHAT HAPPEN, Serenity and Nooo-I-Don’t-Wanna-Leave.

Having never drove on the right side of the road before, it was initially pretty confusing to always keep right and turn into the “wrong” side of the lane, but it gets easier as it goes. So we began the 4.5 Hours drive towards Maine, Acadia National Park (ANP), listed as one of the most visited National Parks in America! 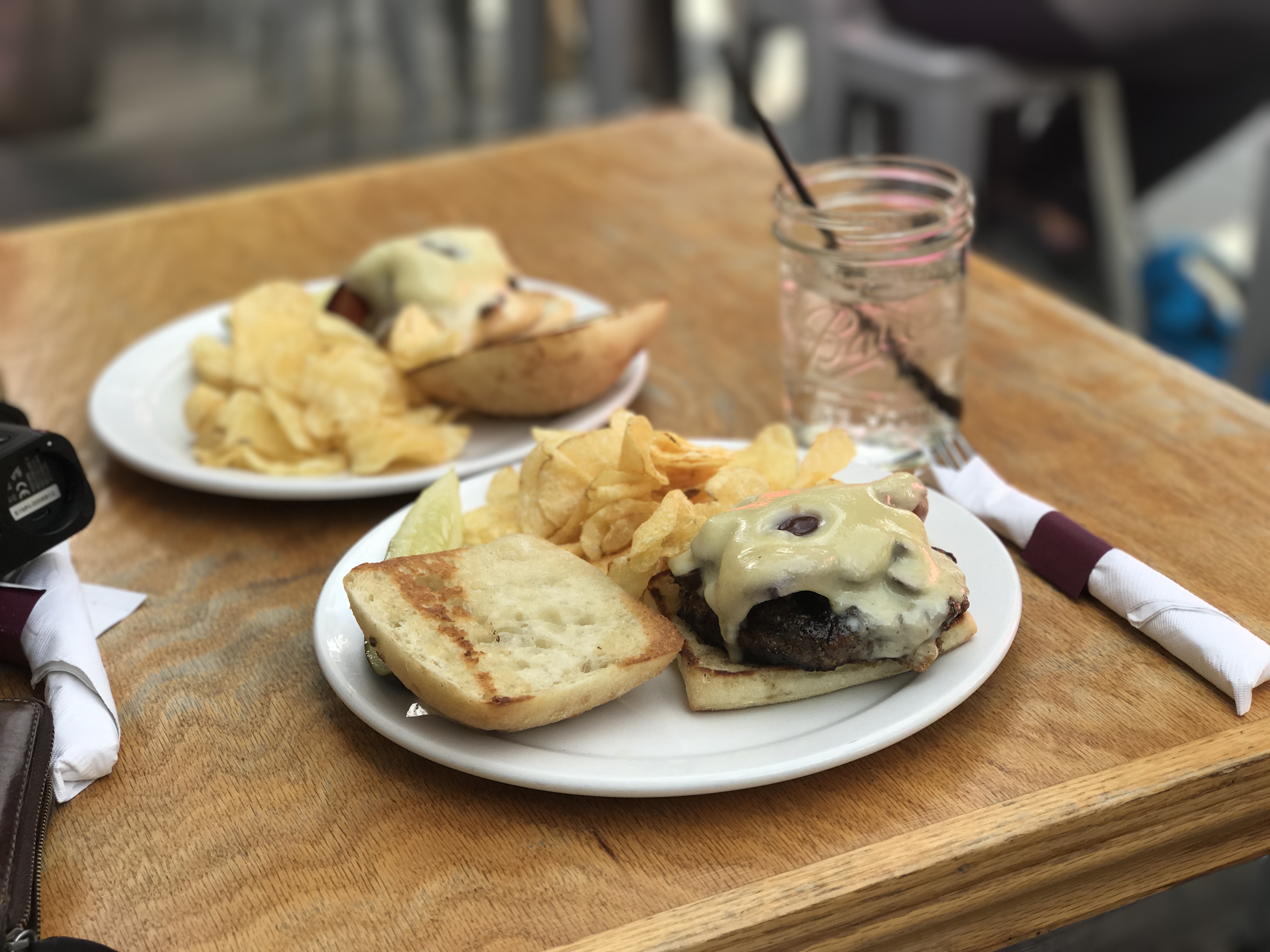 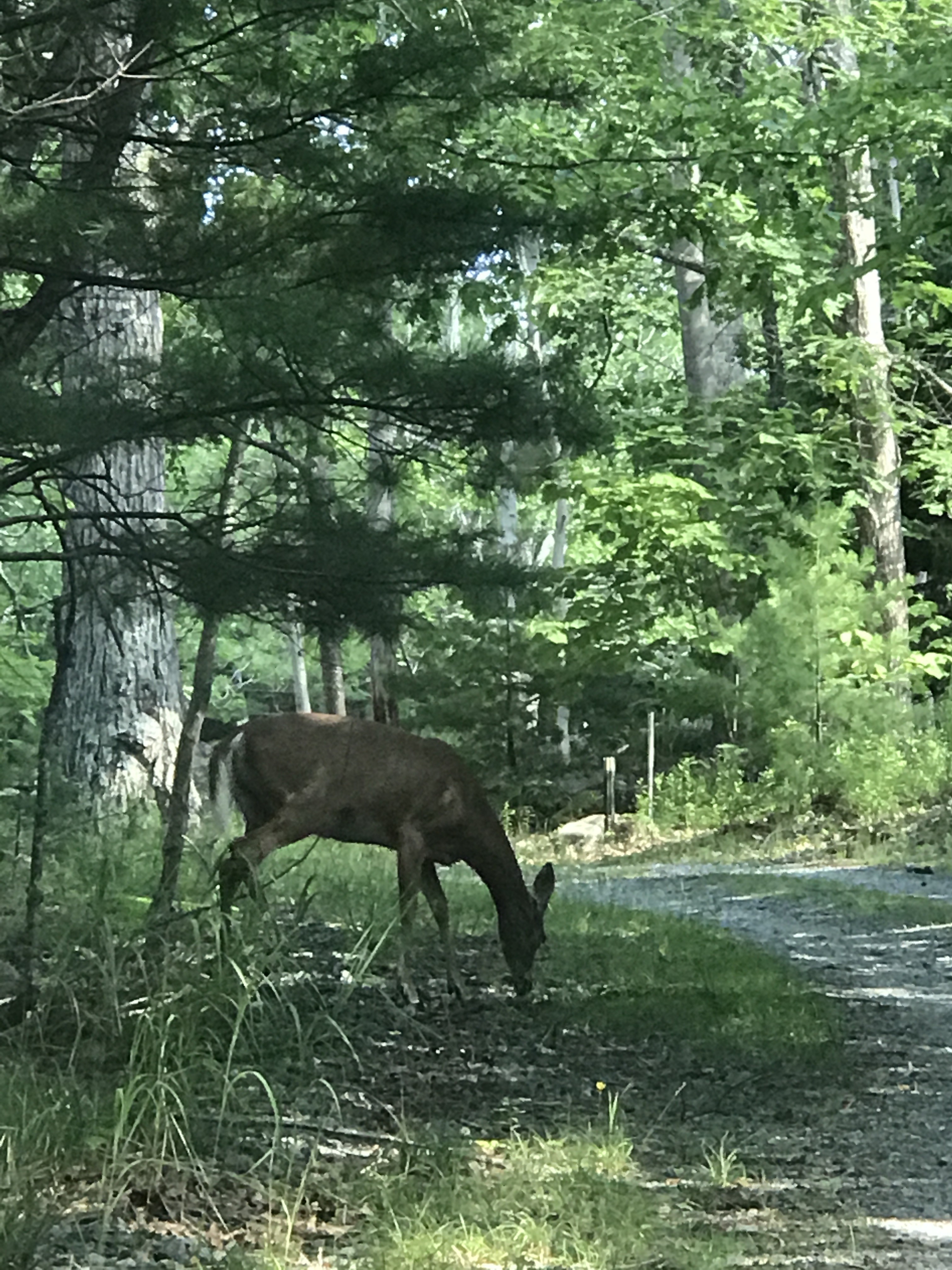 As we drove to locate a  parking lot before starting our hike up Mt.Champlain (328m), we chanced upon a cute deer!

The hike up Mt.Champlain is nothing short of impressive views, having climbed some mountains before, this is truly one of the more rewarding ones as you constantly get enchanted by a panoramic view of the Atlantic Ocean and neighbouring islands.

Of the path ahead and beyond! 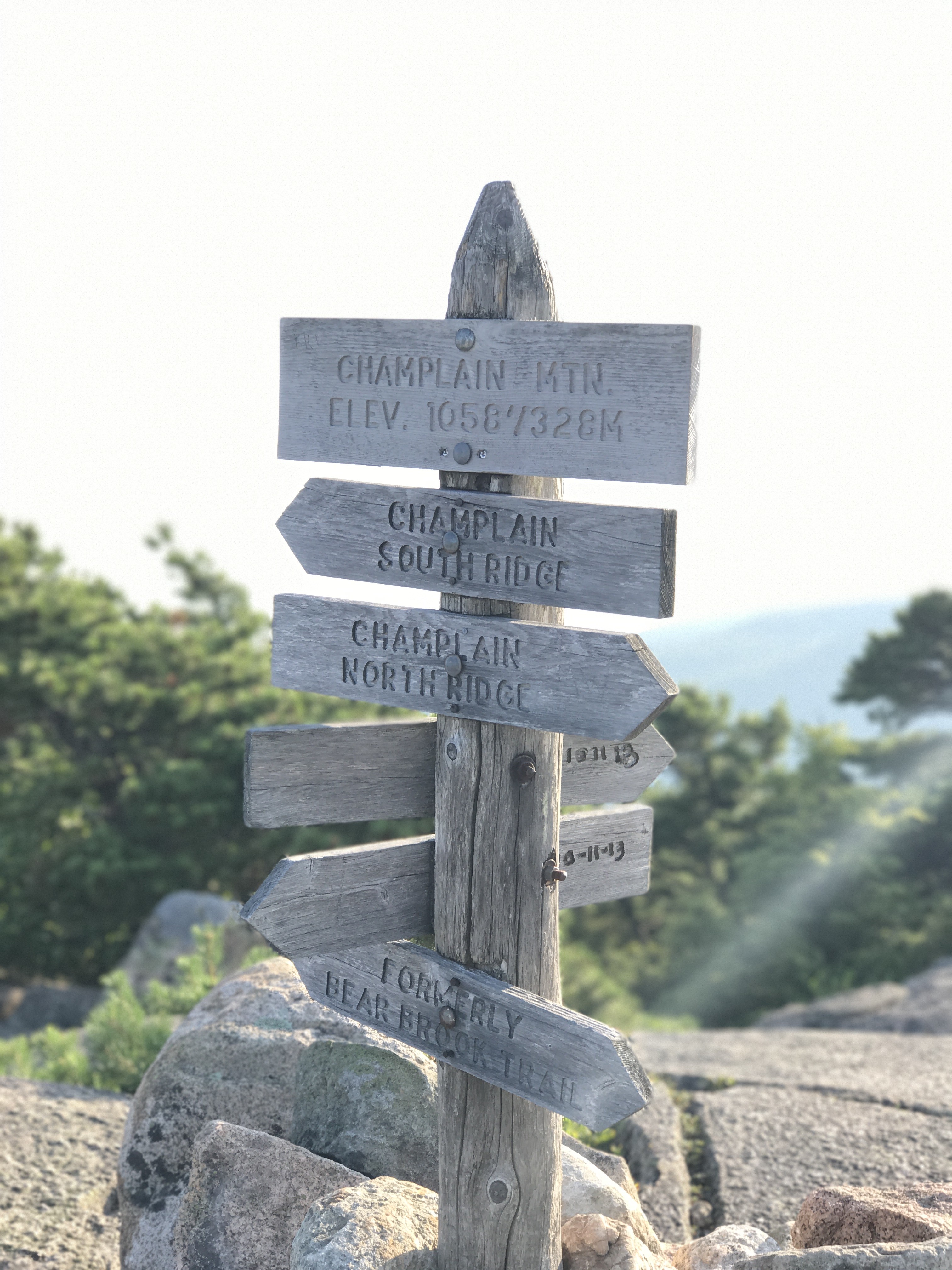 All the numerous paths which leads up to this peak! 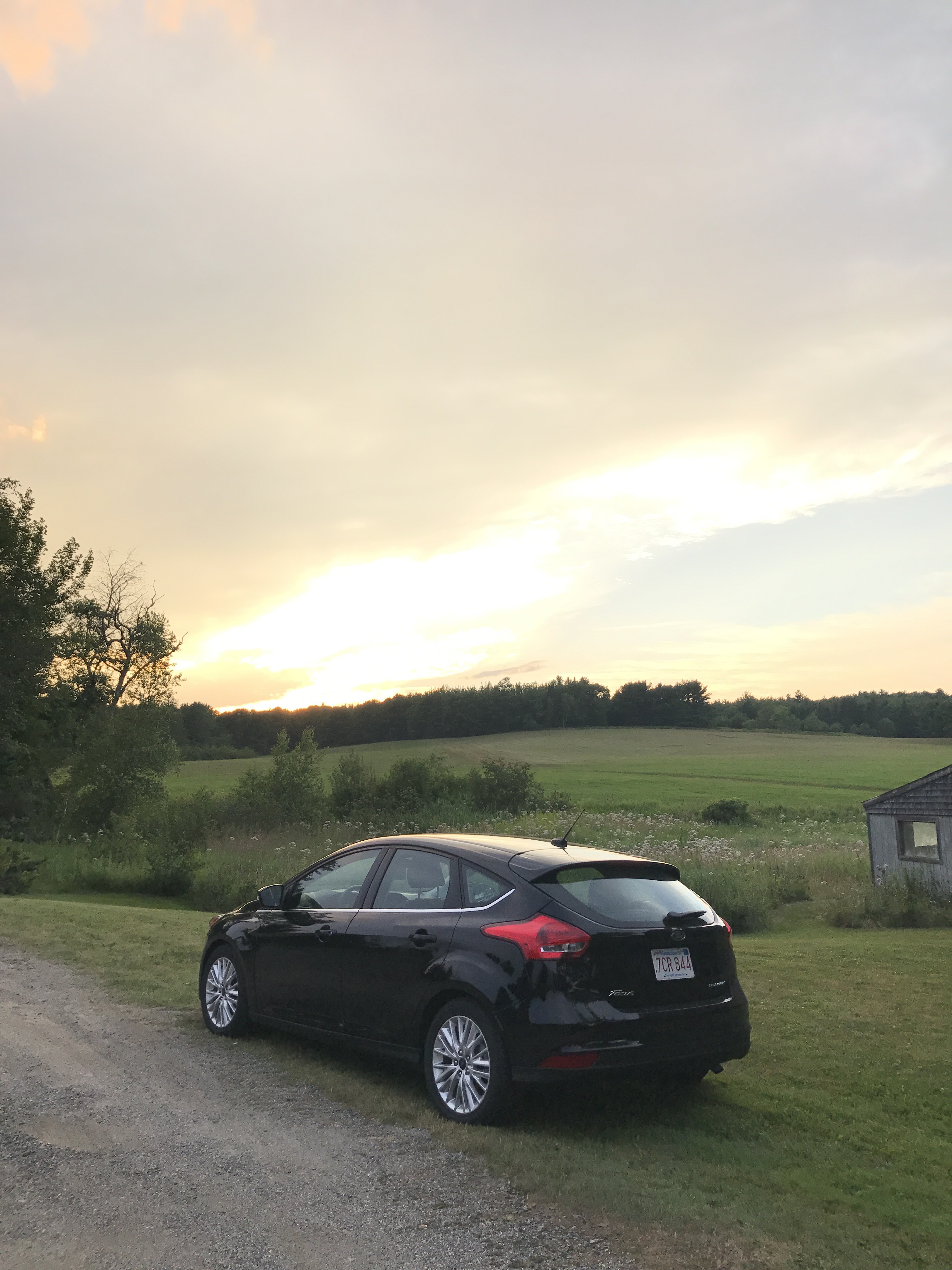 After the hike, we continued the drive to dinner in our Ford Fiesta! Deceivingly, this was already way pass 8pm and definitely not the 8pm in Singapore, but its great cause more time and light to explore! 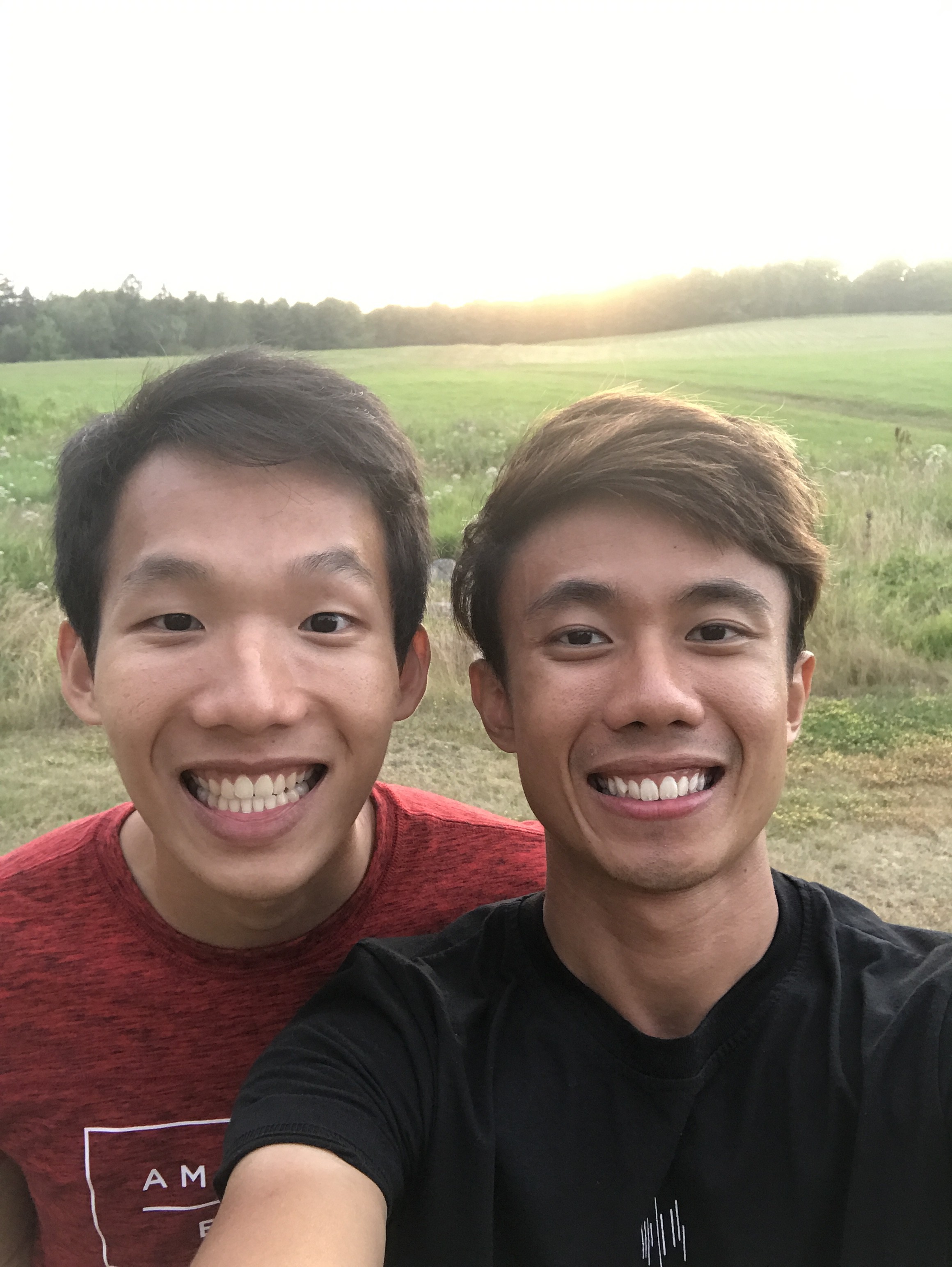 Grabbing a shot of the lawn before sundown!

NEXT DAY: We woke up really early (3am) so that we can catch the sunrise atop Cadilac Mountain(466m), which in certain times of the year, is the first place in USA to see the light! We quickly see the crowd building as we approach the foot of the mountain and very luckily managed to secure a parking lot atop the peak! 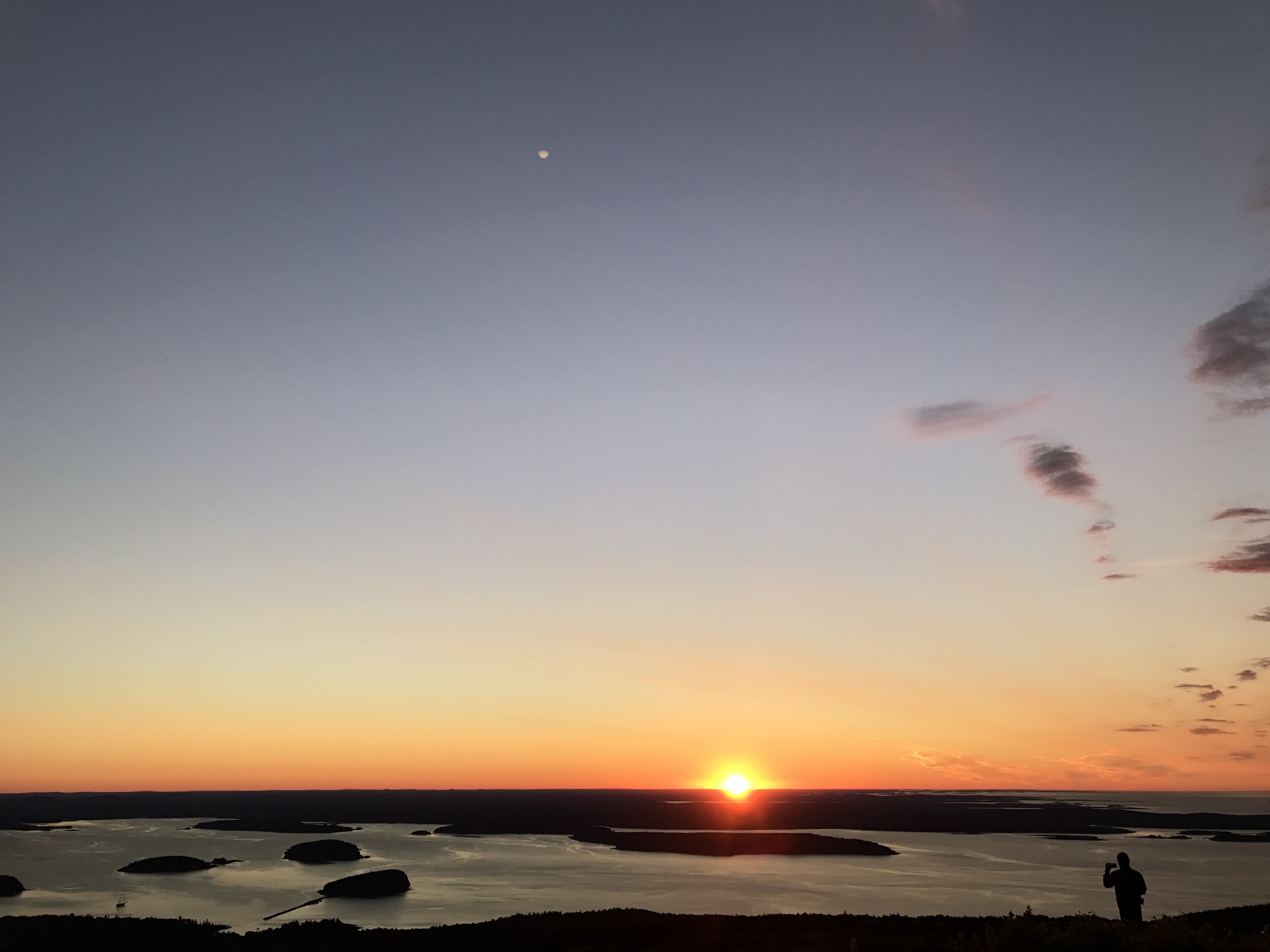 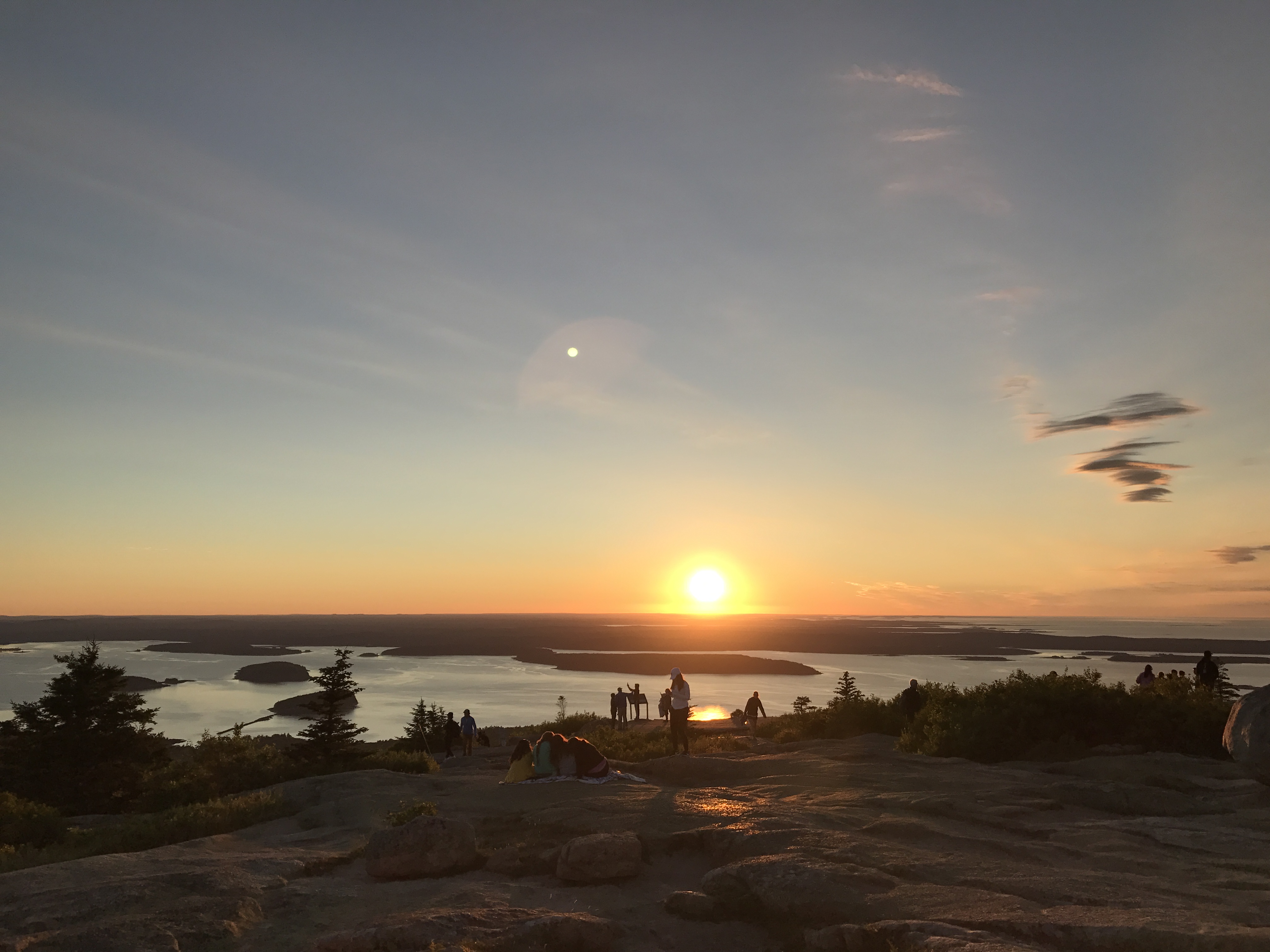 As it was my very first time seeing the sun  creeping up from the flat horizon, it was really surreal and faster than I thought. It was this moment that I realised time really does pass by rather quickly just like how swiftly the sun moved beyond the horizon!

Afterwhich, we were simply too tired to continue, so we slept in the car and had breakfast before we moved onto Long Pond for Kayaking! 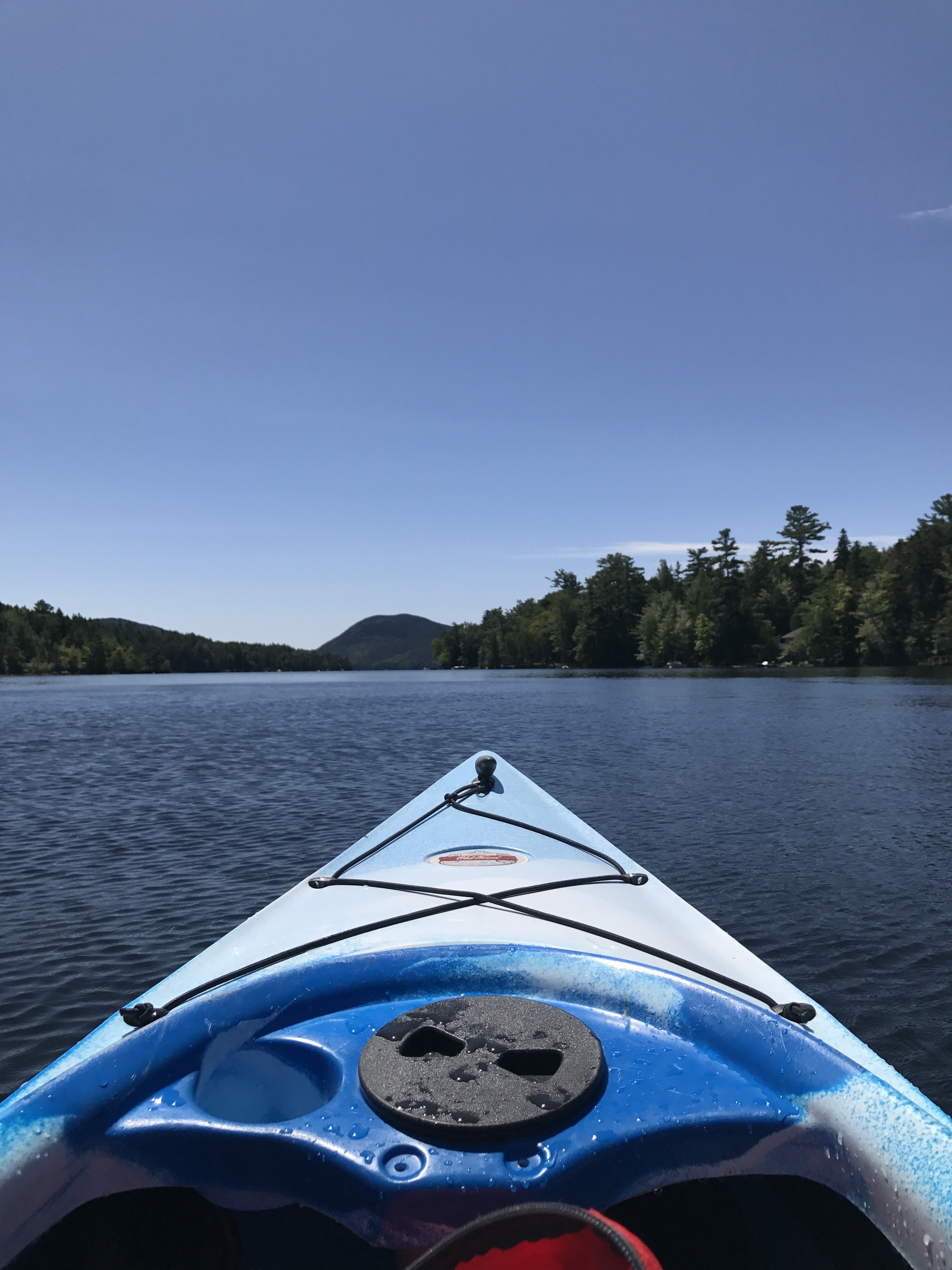 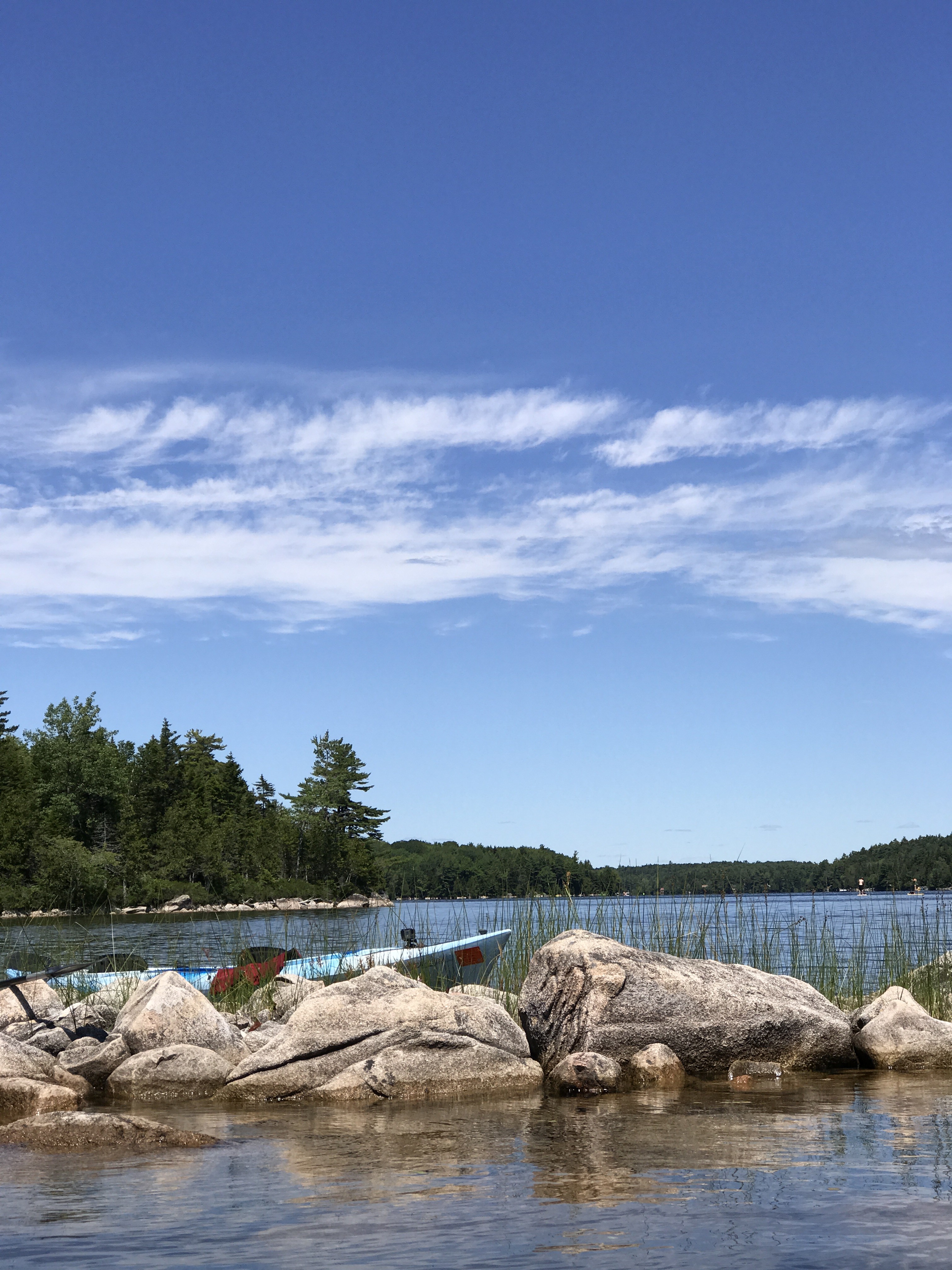 Our Kayak as we docked upon some rocks! 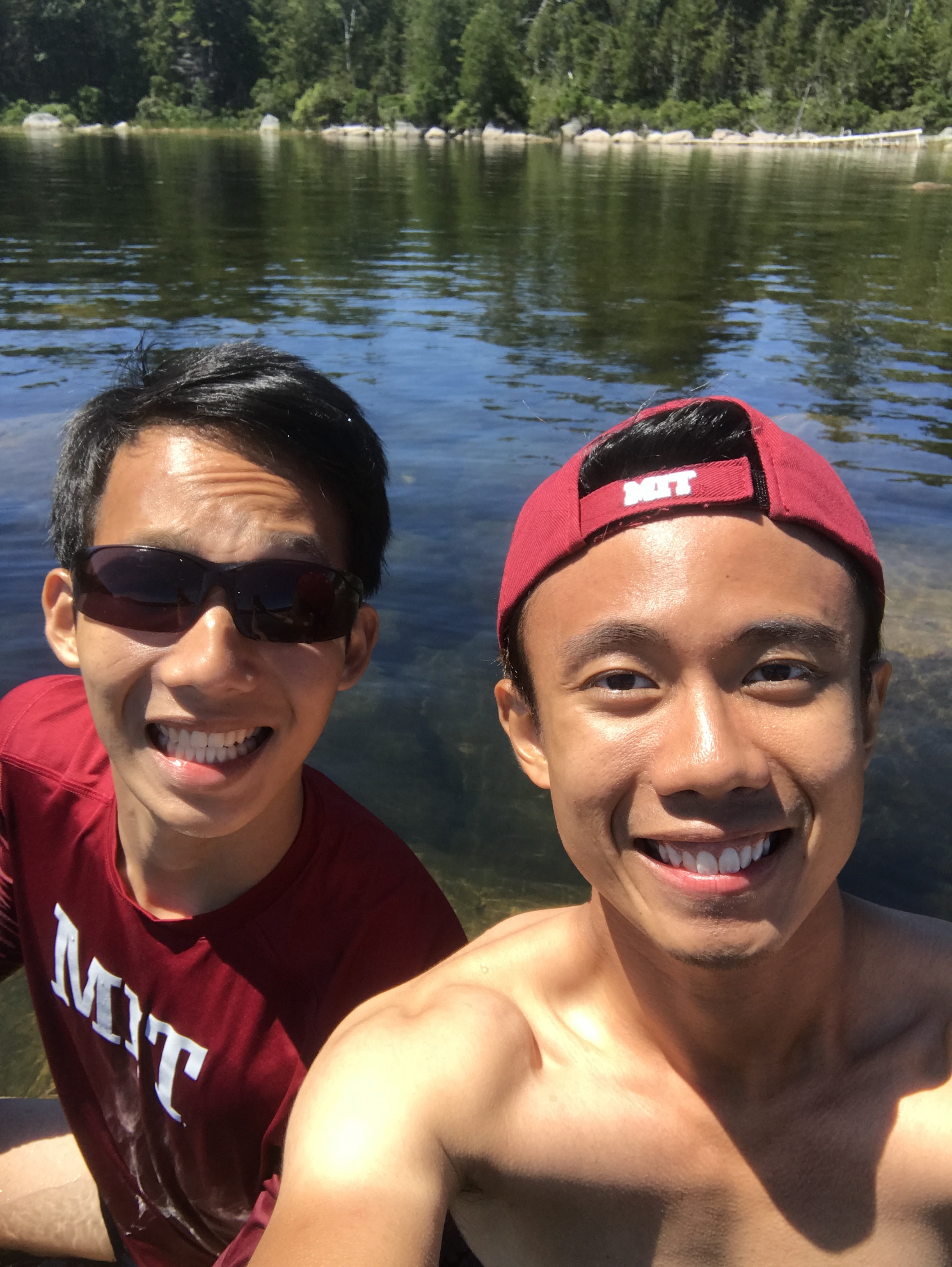 As we come to the end of our Acadia Road Trip, we rounded it off by having Maine’s Soft Shell Lobster (you literally can peel and crack the shells like hardened paper) which was really sweet and fresh just by itself! 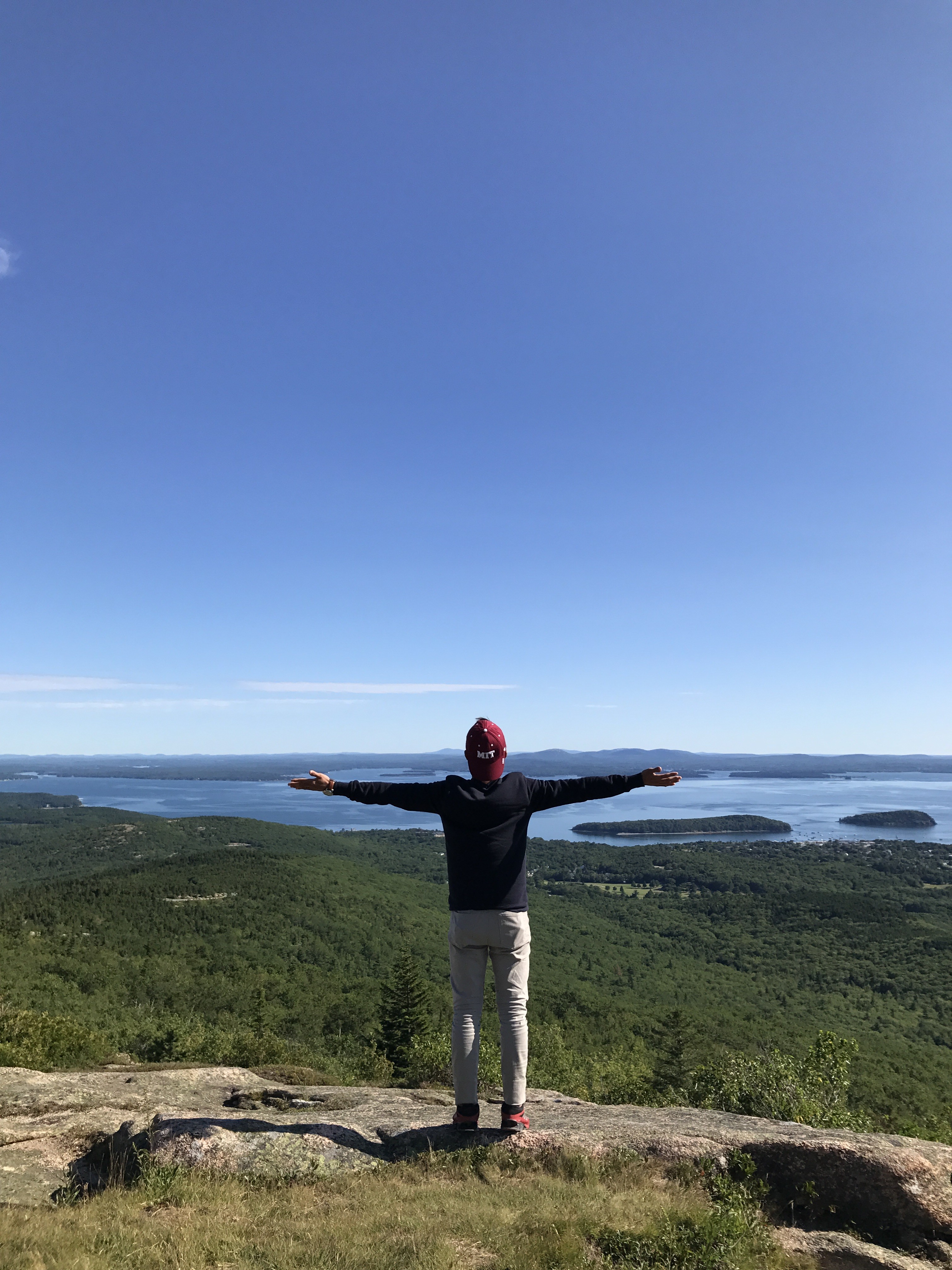 And there goes this exciting week of Float Testing and Acadia Road Trip! Wish everyone whos either on exchange, internship or simply having a good break all the best and can’t wait to see everyone back in school!