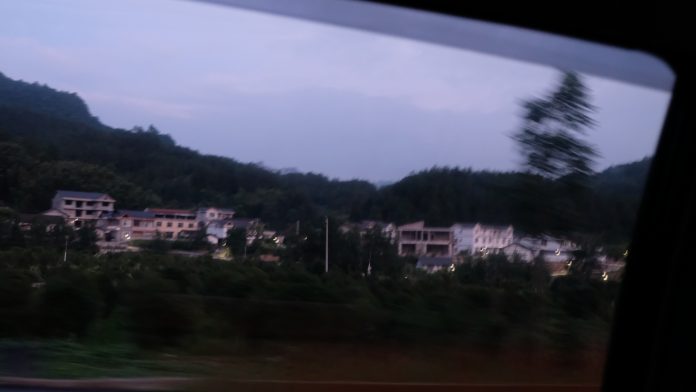 Well it was day 2 of the solo mountain trekking and after such a fiasco yesterday, with the sighting of a snake, i didn’t think that today would have been able to top it, but well it did and boy did it do it by a long shot.

It was a slightly rainy day today and so i took it easy slowly trekking up another mountain, Huang Shi Zai.However when i reached the top i was slightly dissapointed as all i saw was mist. 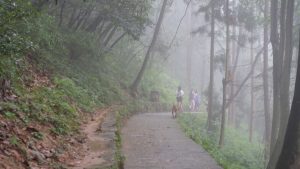 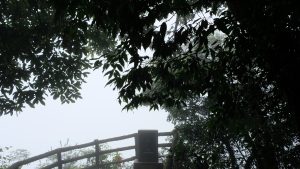 These 2 photos basically summarizing the view at the top. What a disappointment. Though i walked a round round the top, i did not actually see anything. Hence i bought a cable car ticket down and proceeded to take it down the mountain. Luckily the view down the mountain was good. Still I guess I breathed in a lot of mountain air and well it was interesting. 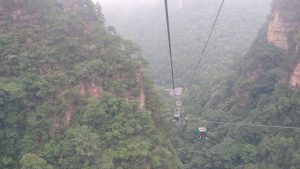 Walking around the park

After getting down, I decided to take a hiking trail instead of climbing and walked to the other side of Zhang Jia Jie. The sights was amazing as I walked along a river and got to see many different mountains with a different view this time while being on the ground. It was a nice change of pace. The Mist was all concentrated on the mountain tops hence by being on the low ground i could observe the majesty of the various Peaks. One thing led to another and well I took a bus and an elevator up to the top of another peak. An experience that was interesting especially since I was the only person on the elevator. Haha I definitely should have been warier of why that was so. 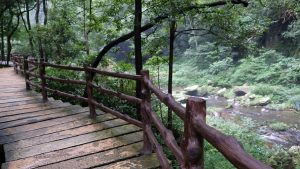 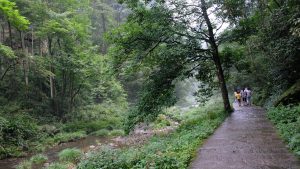 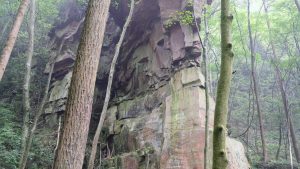 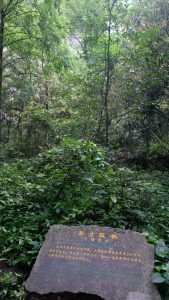 Anyway I took a bus to the first bridge on earth and ended up at Yang Jia jie. The same place where I was yesterday. 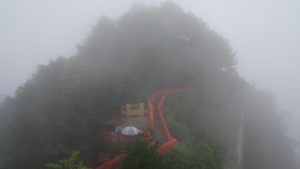 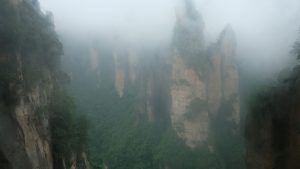 However when I went to the cable car , It was stationary… I was just dumbfounded…. Apparently, the cable car only operated till 6.30pm and it was 6.40pm and hence it had stopped. I didn’t know what to do and panicked a little. I asked around the bus station for help and they told me I had to hike down the mountain. Thoughts immediately ran through my mind. “Oh my god… that hike again? It was dry yesterday and it was already a challenging hike…. And there was a snake… You want me to hike it again alone?” I didn’t think I would make it. And that was the bus station personnel telling me that… I was just scared…. But luckily asking around more, I managed to chance upon a stall owner who ordered for me a private driver to bring me down the mountains for 150 yuan. It was a lucky break. Little did I know that it was still not over. 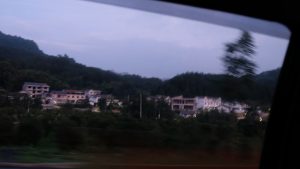 The reascend in the dark

When I reached the bottom of the mountain, it was already dark as it was a separate route which took over an hour.  I luckily managed to ask for the park internal bus driver to drive me up the mountain towards a point where I had to walk abit before another bus station. However when he drove me up the mountain, he stopped halfway through it and said that he could not go any further. I was really scared but did not really understand. I was sure that the driver drove up all the way the day before. But not wanting to argue, i headed down the bus and proceeded to walk in the darkness along the road. Soon the headlights of the bus were gone and the only light that guided me was from the torchlight feature on my phone. I couldn’t even take photos as the app blocked the usage of both camera and torchlight at the same time. t was a scary walk. As I took each step I could feel the chills down my spine and wondered what would happen if I encountered a snake. Furthermore, I was alone and with each step I took I could feel the loneliness sink deeper into me. I walked a good 1km in the dark before realizing why the bus driver could not drive any further. Apparently there were road works at the top of the mountain. Just my luck. After I reached the top and saw the construction work going on, I knew i had to continue forward downwards down the other side of this hill. As i talked to the construction worker to confirm my location and direction, one of them questioned if ‘Aren’t you scared that you are travelling down the mountain Alone?’ I replied :’Of course i was but that was the only way down and hence i had to carry on forward even if i was scared.’

The Descent in the Dark

Hence i continued on my journey alone. Soon the lights from the construction dimmed away and i was in darkness again. It was another scary journey. But luckily it was a path that I had walked before so I was able to roughly piece together the way to get down. Though it was a mountain path hence it was definitely the most dangerous part of my journey, I just constantly placed on leg in front of another and kept on walking, hoping to get down as soon as possible while my head ignored all the ghost stories i have ever heard in my life,while also keeping a lookout for any snakes. It was a terrifying experience. With bouts of cold mountain breeze blowing at me. However,i soon made it to the bottom of the mountain.This was where I had hoped that there would be buses but instead it was pitch black.

There were no lights on and i thought to myself that there was no way in hell i was going to wait in the darkness alone at the bus station. Hence i hastily made the decision to continue down the mountain following the road. So, I had no choice but to walk down the mountain alone in the dark along the road. I managed to make it to Huang Shi Zai station. The same station I was at in the morning, however when I reached there, even though the station was lit, I did not see anyone…. So, I sucked it up and continued walking in the dark. Feeling the chills through my spine as I took every step. By now the wind was even colder but I kept looking down and just walked with the light from my torchlight as my guide. I just wanted to get this over and done with. Along the way, I saw an older man with no light just walking in the dark carrying a load. It was super scary, and I felt that he was the real man being able to walk through this darkness without a light. This was still in the mountains and there were snakes about.

Shortly after that I saw 2 lights along the road. It was a bus! I just couldn’t believe my luck. I quickly flagged it down and boarded it. Apparently, i learnt that you could call a bus using a phone number and the bus would be dispatched to pick you up. A group at the first stop had called the number and so the bus was dispatched to pick them up. It was really a sight for sore eyes. And so, I boarded the bus and went up all the way to the first station again. There was a bunch of people and I finally had company. The bus brought us all back to the bus terminal and we walked out as a group together. I was glad that I just had company that night. It was just a journey that was just full of fear. But I am so glad that I made it. Overall, I think I had walked around 4km in the dark and it was something I am glad is over.

Tip for the future, please do not travel after 5pm, try to make it back to the entrance you came from by then. Also, if you are a really stuck and you know that it is a bus operated route, you can call for help to bring you to one of the stops. But with it being so dark, you might not want to wait at the station… But overall just stay calm and figure out the way out. If you lose your cool and panic, then it is game over. Keep calm and composed, you can be afraid afterwards, but for now focus on getting out and surviving.