With the bummer of a trip to Yosemite behind us, our next road trip took us to one of America’s great lakes: Lake Tahoe. Fun fact: Tahoe literally means edge of the Lake in Washoe Native American. Nonetheless, before embarking on the trip to Lake Tahoe, we still did a few noteworthy things throughout the week. 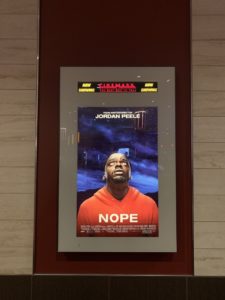 We caught Nope at our local movie theatre at Century 16. The movie theatres here were large and spacious. The chairs were large and comfy, plus, they could even recline for you to watch the movie in comfort. Protip: movie tickets are a lot cheaper on Tuesdays in the US, hence you might want to use that to your advantage. Overall, US movie theatres are something you should experience given the chance. 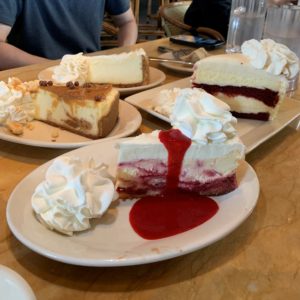 On Friday, we also went down to the esteemed Cheesecake Factory. Located at the Westfield Valley Fair in San Jose, it was a short 20 min drive to the place. True to its name, the Cheesecakes were large and I mean large! Each Cheesecake was loaded with cream cheese, and had its own generous share of toppings depending on which you ordered, all accompanied with a generous dollop of whipped cream. Just be careful though, each slice of cheesecake weighs in at around a whopping 1400 calories. The red velvet one that I ordered had a monstrous 1600 calories! Hence, this was not a place for the diet conscious fanatic. 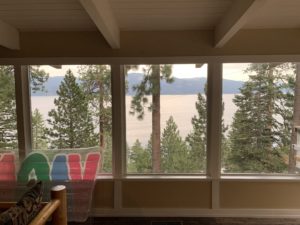 The big highlight of the week was the trip to Lake Tahoe. Famous for its crystal clear water and alpine environment, Lake Tahoe is a must visit destination. On Sunday, we took in the sights at the many vistas along Lake Tahoe’s 72 mile long shore. We drove up to inspiration point and Pope Beach at Emerald Bay. There was a certain kind of wonder that filled us when we viewed the lake from the vistas, the aqua blue lake flanked by the Sierra Nevada mountain range was simply breathtaking. We also hiked along the Eagles Falls  trail and came across a pool where we did some diving and dipping in the refreshing waterfall water. Then, we headed to our AirBnb at the north of Tahoe. It was a roomy ski lodge with ample rooms, a kitchen and even a bar counter.

The following morning, we left the Airbnb and made our way to King’s beach. There, we soaked in the sun and let loose in the water. The waves were gentle and the wind brought in the fresh mountain air. We splashed about in the water and used the floaties that we bought from Walmart to relax in the rolling waves. We also rented a kayak which we took turns paddling about. It was a blast at Lake Tahoe and it probably went down as the best beach day of the summer.