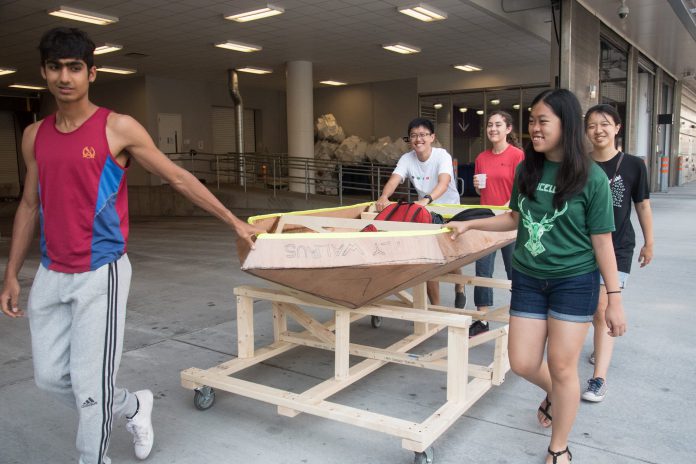 Twas a pleasant Monday morning with the aroma of toast permeating the air around the breakfast tables at Pi Phi. As I sat peeling the shell off a hard boiled egg, my mind drifted to the final boat test the day before. Good fortune showered upon all but Team Walrus at the Charles. The shifting of a single set screw in the drive train caused our boat to stall in the midst of a river cruise. The Frankensteinian rudder caused poor lazy Susan to torque at extreme angles, prompting us to design a new one by race day. Apprehensive of what lay ahead of us, I bit into my toast and headed up the IDC stairs.

Situation turned out to be much less catastrophic than I expected. All we had to do was remove the shaft, Loctite the gear-shaft connection and drill a larger set screw into the connection. As for the rudder, we opted for a simpler, more lightweight design and set to work.  All’s good in the hood.

On Tuesday we began painting our boat and slowly piecing together the broken pieces. It was great to see everyone applying the final touches to their boats, with Lobster commencing on painting their fiery red, white spotted body. Today’s globalization class was thoroughly insightful as we discussed the reasons behind the success of mega popular brands such as Apple, Nike, Coca Cola, Walt Disney and more. These companies were immensely successful because they sold an idea, not a product. Something to consider when working in/on a startup. We then had pizza for dinner!! No idea where it came from though, apparently Rachel ordered it off a random site. No matter, it tasted good.

Wednesday witnessed Starfish’s boat transform into a dazzling vessel of gold and silver. Done with the rudder finally – a huge relief for us. Hit the gym right after work and scooted back to pi phi to join the other 8 on the cold wet (twas a rainy evening) walk to Chris’s place for a scrumptious 4 course dinner. Beautiful place, Sally and Chris were so sweet together! Dinner kick started with a bowl of cold vegetable soup (Sally made all the bowls!!). Then came the delicious lobster rolls and buttered corn on cob. Finally we appeased ourselves with a blueberry crumble vanilla ice cream to fill our stomachs and a lively conversation to fill our hearts.  Cheesy yea I know.

On Friday the finishing touches – paint, laser cut stencils – were being added to the Flying Walri. Completed a grueling interval workout in the evening and headed out to walk the freedom trail in the dark of the quiet night. Started off at Fanueil Hall, went past Haymarket, crossed the Charlestown Bridge and headed towards the USS Constitution, a decommissioned vessel that was used during the 1776 battle against Britain. Meandering through a quiet neighborhood reminiscent of 18th century colonial style houses, I reached the Bunker Hill Memorial, an awe inspiring tower commemorating the fallen soldiers of the Union Army. All through the cool night I was gripped by introspection. Till this day I’m grateful for the opportunity to come to the States.

Saturday was our day off, so I went for a run first thing in the morning before heading out to the Museum of Fine Arts. The art collection was so awe inspiring, I lost myself in the sea of paintings. John Singleton Copley, John something Singer, 2 great American artists. Saw some of Rembrandt’s works too! Then scooted over to Haymarket where I purchased blueberries, strawberries and raspberries costing only a dollar each. Headed over to Giacomo’s eager to enjoy a hearty Italian dinner with my Walrus teammates but unfortunately the line extended till the next street. We settled for La Famiglia Giorgio’s where I faced one of my biggest eating challenges – a humongous plate of tortellini with chicken, veal, mushrooms, onions and heaps of pesto sauce. Tasty but oh so filling!

THE D-DAY!! I mean, RACE DAY!! Up bright and early, we bounded off to the IDC to take our boats out to the Charles. As we passed by curious onlookers, poor Lobster’s cart broke after a traffic light crossing. Soon they resolved the issue and joined us at the Sailing Pavilion.

10am and the challenge was kicked off with team Starfish’s boat cruising through the course in 68 seconds. Next up was team walrus aka flying walri aka the jank mobil! After some adept maneuvering, we got the mighty flying walri in the water with Tze How in it. The engine whirred to life and the flying walri cruised down the course while everyone chanted ‘FLY WALRUS FLY! Soon, disaster struck – the fuse broke. We towed our beloved boat back to the dock and we set about replacing the fuse while the graceful Lugia hit the water. Sadly, the shaft coupling gave way 10 seconds later and the mighty Lugia too was pulled out of the water for resuscitation. Chris scooted over to the IDC to get a new shaft coupling for them.

Team Lobster went next, only to be halted by a broken set screw. All 3 teams worked furiously on our boats till the call for lunch had to be answered. Soon after, Walrus hit the water again, this time with Blossom in it (I was asked to get out because I was too heavy). Alas, 100 meters down and the shaft coupling shattered – a predicament similar to Squid’s.  Dejected, we watched as Lobster went for a second go. Success! Lobster made the trip as we cheered our lungs out in unison. Lugia next. Success again! Jinny commandeered the mighty Lugia. Guox was next and we were thoroughly entertained by his antics and ludicrous facial expressions.

Meanwhile, everyone was having a go at Starfish’s vessel. 12 passengers in total! Remarkable considering Starfish’s was the only boat to have capsized and flooded during the boat test at Wang’s. Happy for them. Yet a little jealous inside.

Ina twist of events, Lugia’s rudder broke and they were unable to continue. Same with Lobster, after Prof John Brisson’s unintentional mistake.  Chris came back with a makeshift coupling for us and we set about removing the drive train casing and replacing the broken one. I admired my team mates’ resilience and optimism. I, on the other hand, had all but given up for there was no way we could get back in the water in time. With hindsight, I should have helped them our instead of sitting on the dock and forlornly staring at the other boats and their happy creators.

Before we knew it, the unforgiving hands of time pulled us to the dinner table where we concluded the day with a prize presentation ceremony. We had the most technically complex boat woohoo. As the sun slowly started to set, we got the boats out of the pavilion and trudged back to the IDC, taking group photos in front of the MIT dome. Depositing the boat at our usual spot at the garage, we headed back to pi phi, sun burnt and albeit content that it has all come to an end.

Went for a run only to be punished by fatigued muscles refusing to obey my command. Body needs rest sigh. As I prepared to hit the hay (or sack), the past week’s events flashed before my eyes and I’m glad to admit to myself that it had been one hell of a ride.