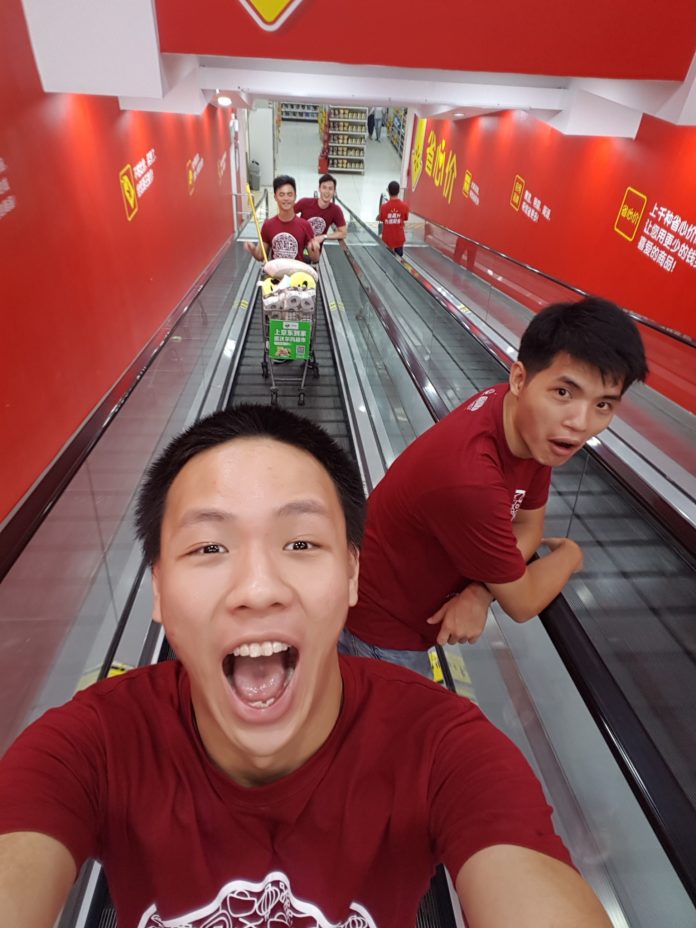 Having just ended Orientation and the rush of being part of organizing it all, flying off to China the next morning was like being thrown into a cold shower. Furthermore, being batch 3 and thrown into this new environment a week later than the other ALP members meant that there was a lot of catching up I needed to do. The Keith of May 2017, did not feel and did not have the time to feel relaxed.

*Context* ALP Batches 1&2 arrived to China on the 6th and 7th of May, while myself with 11 others in batch 3 arrived on the afternoon of 14th of May. Batch 3 was made to accommodate those who had to participate in the SUTD Freshman Orientation or had other commitments within this time period.

Upon arriving at the CuiBai Hostel late in the afternoon, we were met with the sad sight of our hostel room. The bed is hard! The toilet is dirty! We need to buy stuff to clean this shit up! Its dusty everywhere! My mind, as well as the minds of my 3 roommates in the same situation as me, was filled with endless thoughts and worry. Anxiety just continues to pile up upon our tired, Orientation-worn out souls.

That night, all ALP members had to attend this sharing session whereby the students from batches 1&2 had to share their first week’s experiences(they went on an excursion) with everyone else in ALP. I tried to pay attention to the groups making their presentations, but the thoughts continued its hard ramble within my head. Being uninterested and thoroughly distracted by my thoughts, I started conversing with my roommates, Marcus, Ryan and Ryann. We started listing out all the things we had to do and settle and as we were going on, we couldn’t help but feel uneasy and felt like we had to do something, NOW. Time crawled by as groups took turns verbally regurgitating about their trips to glorified tourists traps when suddenly, the sound system broke down! 10 minutes of unsuccessful attempts at reviving the dead sound system and people mouthing ‘mike test’ into the mike later, the organizers decides that we should switch rooms.

Looking back towards Ryann, I bobbed back my head, curious as to what he was thinking.

Marcus looked back at Ryann and gave a smirk.

Ryan smirked, but did so just not to feel left out.

Then Marcus proposed, “Let’s bail. Let’s go buy all of our cleaning products now, so we can clean our room tonight.”

“But we don’t have to stay till this ends meh?” I said in response.

“I don’t know when this ends, and I don’t know if we can still buy stuff at that time.” Marcus looks around to check if anyone didn’t even attend this session in the first place.

“But won’t we get like, blacklisted for bailing this shit?” I said with a hushed tone.

“Fuck it. You want to bathe in dirty toilet tonight? You want to sleep on the exercise-booklet-thin pillow?” Marcus said, eyebrows raised, eyes wide open, imploring me to think about what that would be like.

“Arggghh I don’t know if it’ll be okay. We just got here, we really shouldn’t.” I sighed as we walked out of the room with the rest.

Walking down from the level 2 conference room we were just in to the other conference room on level 1, Ryann, walking ahead of the rest of us, turned back and gave us the look again. Marcus mouthed back, “let’s go.”

The moment Ryann’s feet touched the first floor landing, Marcus and Ryann made a dash to the building’s exit.

Shit. We are doing this.

Thoughts racing through my mind, adrenaline building up and in the spur of the moment, I pulled Ryan along with me and we all ran out of the building, never looking back.

Out of the building with no way of people contacting us, no sense of direction and in a totally foreign land, I felt, for the first time in the entire day, completely free and relaxed. All the anxiety, the thoughts of having to catch up, the mad rush of events after Orientation, just pushed away by the thrill of that moment. Panting and drenched with sweat, we stepped forth on the 3 month long exploration of the land of our ancestors.