Having visited the Cainiao factory, most of us(one was still in Shanghai) met up again with our theme prof on Monday to start discussing our plans for the presentation we were suppose to give on Friday to people from Cainiao 0_0 Out of all the issues given to us by Cainiao, we chose to tackle problems to do with the label on parcels and the efficiency at the Cainiao collection point. 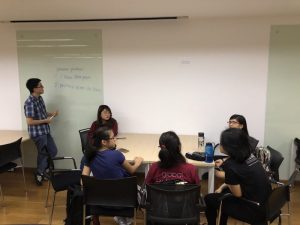 Gathering of most members

On Tuesday, with all members present, we continued to discuss the issues we decided to focus on on Monday. At the end of our meeting, we split ourselves into two groups , each group tackling one of the two issues. This act was met with unforeseen consequences…

Wednesday was the second lesson of the Design fiction course in which Premiere Pro was introduced as a way to animate our sketches that we drew the previous week. The end product was a 15s video. Of course we did not expect to have to keep our sketches from the previous week so most of us had to redraw our sketches:)) The videos made were all amusing with one group even drawing anime-style with Tokyo Ghoul music as the sound track!

After our lesson, we got to tour one of ZJU’s fablabs where we got to see all sorts of cool projects done by ZJ students such as tracking points on the face to map to a virtual face or being able to see how different hairstyles look on yourself just by indicating where your hair is after your picture is taken.

On presentation day, we took didis to the Cainiao company which was surprisingly not that far away, about 10-15 min by car. 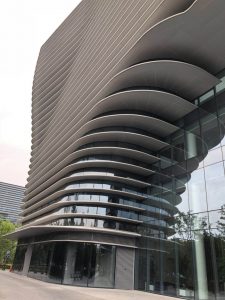 what a funnily shaped building!

The security of the building was similar to that found in dramas(or is it dramas which mimic real life) Either way, a company tag was required to even exit from the lift lobby after reaching the floor we were suppose to, which made us wonder whether we would get similar tags:> 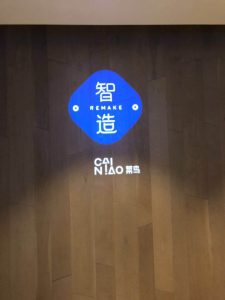 Entrance of the place we went to

After entering the room, we were introduced to the judges that were to listen to our presentation who were actually a team of designers with specialisations in different parts of the Cainiao transportation process. Ever heard of The Voice? It’s a singing competition where during the performer’s performace, judges can around to indicate that they would like to mentor the performer and at the end of the performance, the performer chooses which mentor he would like to work with(if there is more than one). Weeelll, we found out that the judges could be our potential mentors, the selection process similar to that of The Voice which came as a big shock to us. Furthermore, when we were introduced, we were introduced as three teams instead of two which we should have taken as an indicator of things to come. The three teams as introduced was two of ours, each focusing on a different issue and a third group from ZJU who is actually doing a year-long project as part of their course(?)

We were up first.

After the first presentation, the judges gave comments and proceeded, The Voice-style, to indicate their interest in mentoring us. It was such a stressful moment as we did not anticipate this event happening. What we expected was to be able to decide which issue to focus on after the presentation, not to be split up. Anyway, at the end of the whole thing, our group has now been split into two, each having two mentors each(there were 6) 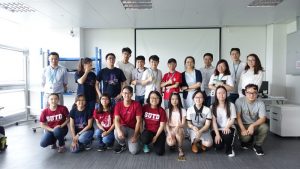 After the presentation was over, we started talking to our mentors. We were also shown around the place which had a makerspace of their own complete with a 3D printer and laser cutter as well as various equipment found in our own fablab!!! We were told that the space was free for us to use as well(Day trips to Cainiao???)