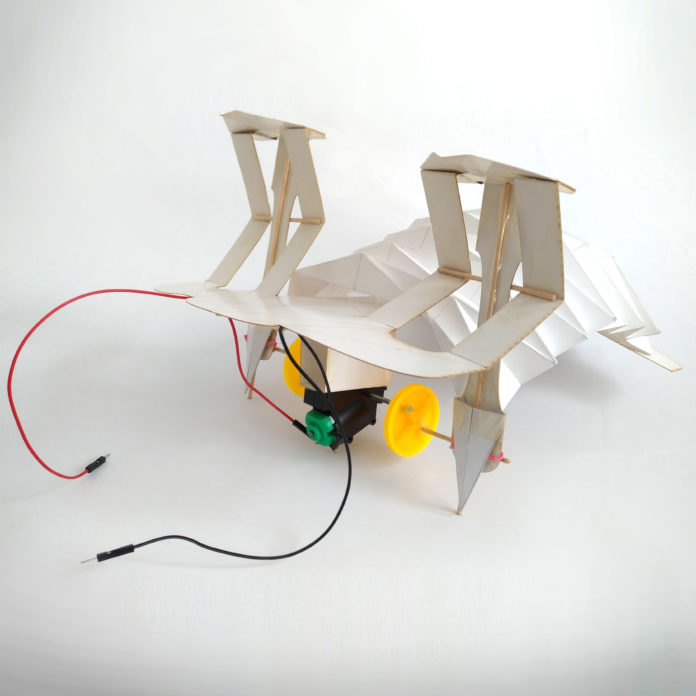 Finally my turn to write the Theme Journal after successfully avoiding it for 3 weeks. Week 4 was actually quite a milestone for us as we concluded our Origami Robot class. The whole Origami Robot process involved creating a folding robot and mechanizing it to allow it to move, actuating the joints and what not with small motors and optionally Arduino. We are all glad it has come to an end but don’t deny all the efforts that has been put into the project. Waking up for 9:30 am class, travelling to another campus for fabrication, and endlessly consulting the TAs or Profs for feedback especially for those going ASD is nothing to discount. All this hard work culminated into a showcase on Friday where each team went up on stage to present their design, as well as a short video about their process and robot movement. It was adorable. The profs and TA’s did a good job is directing each group into different styles of locomotion and design. There were origami robots mimicking the movements of a varied spectrum of animals from butterflies to swans to jellyfish to trilobites and even a squatting man on a toilet. Caterpillars were by far the most popular one to mimic, and it was hilarious when the exact same Googled (maybe Bing-ed) image appeared on three group’s posters. Was quite the laugh. ZJU issued each group with a certificate, appreciating each robot for a specific quality they excelled in. ‘Best’ means nothing when there resulted in 5 or so groups having ‘Best in Aesthetics’, ‘Best Movements’, and above all ‘Best of the Best’. It was an enjoyable end to the course and we are all relieved at this juncture of 1 month of anniversary in ALP.

Oh and ZJU handles claims so efficiently. Cab claims were a breeze to do when you just present your collated receipts to the profession who then proceeds to transfer you the compensation on the spot into your bank account via mobile. SUTD has much to learn from ZJU in this field. But hey, SUTD is still new while ZJU recently celebrated their 120th Anniversary. Apparently, it was huge, the event. With floats and performances and whatnot. Pity I was in Shanghai that weekend.

All this rambling and I have yet to talk about our Theme: Screens and Beyond. We got the EM Sense device working. Our little piece of antenna looking-gadget is able to identify electronic devices on touch by just the devices’ emitted electromagnetic signatures. Pretty cool. Tricky part is thinking of what to do with such capabilities, but we have narrowed it down to a Social app to host events with friends, and a Learning app to teach newbies about how to do their job. We have weekly meetings to discuss this but this month-iversary week is the week where we finally get the device working and refined the application idea, so we can finally see things coming together. Lot’s of work to be done, but it’s heartening to see tangible results this week.

All work but no play makes Jack a dull boy. Thankfully we have no one named Jack in our group. Rather we have spontaneous TA’s that brought us our for Archery, Pool and Seafood dinner on Sunday. Surprisingly archery and pool was held in the same room, it was a strange combination, but I’m not complaining since it was amazing to try out archery and show-off my less than decent pool skills. Basically the white ball (I’m sure there’s a more official name for it, but for now, white ball) flew off the table. Other than that it was good and it was incredible to see the TA’s taking us out for cohesion and such. Really makes the work in ALP feel that much warmer and I thank ZJU for that.