A month has passed… and I have pretty much settled down and gotten used to the life here in ZJU. In the morning, warm fresh milk from the bread shop a minute away from the hostel is a must before proceeding to Yueya Building for class or to meet my group to work on our task for the week. Lunch and dinner are then settled at the school canteen or at the food street outside of school. Of course, besides this boring routine, there have been some interesting events that happened over this past week:

As part of the industry visit segment of DATE@ZJU, we paid a visit to Asia Euro Automobile Manufacturing aka Volvo Geely Factory in Taizhou this week. Personally, I signed up for this visit because it was “Volvo”, a familiar and famous automobile brand, but never did I expect to have also signed myself up for a whole 10 hours of travel on a bus. The ride was tiring but the 2 hours spent there was certainly an eye-opening experience as I got to observe the manufacturing line for Volvo cars in a first-person perspective. 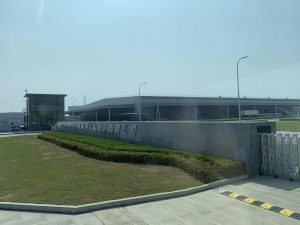 Previously, I used to think that manufacturing factories are very labor intensive as how they are portrayed in online sources. However, after the tour around the factory, which sadly we were not allowed to take pictures of, I realized how big a role technology has in the manufacturing process of Volvo cars. Machines are employed throughout the entire factory, and can complete certain processes with much higher precision as compared to humans. Of course, there are still engineers around but they play a secondary role of checking and making sure that parts are assembled correctly before passing it on to machines to do most of the work.

We had the opportunity to observe the entire manufacturing process, starting with the “heart” of the cars – the engines, to the “marriage’ process – a term coined by the engineers which refers to the assembly of essential components (the engine, oil tank, exhaust pipes) and the car body, to the final checks of the exterior and interior of the car.

After the factory tour, we had a presentation of the history of Volvo and its current parent company – Zheiang Geely Holding Group. The pace at which Geely Holdings is expanding is really jaw-dropping. Established only in 1986, the group has now expanded to 5 subsidiaries and has more than 10 brands, including international well-known brands such as Volvo, PROTON and Lotus. Its success is felt and proudly proclaimed by not only the employees, but also the locals. 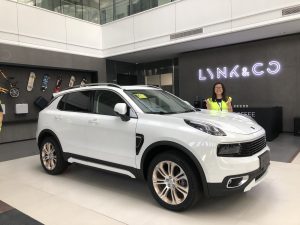 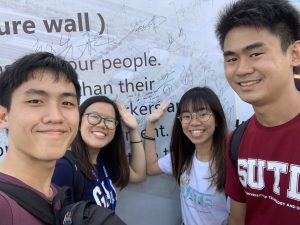 This week also marked the third and final visit to 湖墅学校. The last activity we planned for the children at the school was dancing. We taught them two self-choreographed dance and it was really heart-warming to observe the excitement and spontaneity of the kids. 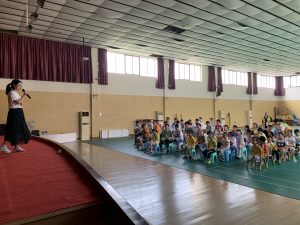 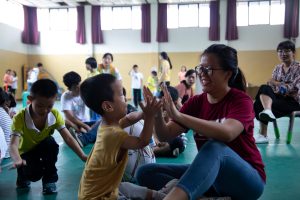 Overall, it has been a fruitful 3 weeks planning and carrying out our activities for the children at the school! 😊

In China, Dragon‘s Boat Festival (端午节) is a big occasion and is declared as a public holiday. Since it was a special day, my friends and I went to West lake area to soak ourselves in the festive atmosphere. We had dinner at a restaurant serving Singaporean delicacies such as Laksa, Hainanese Chicken Rice and Curry Chicken. The food was on the more expensive end but I have to admit that it certainly felt great to taste familiar food after a month. 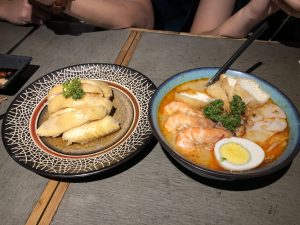 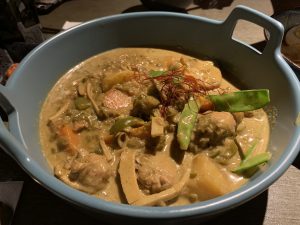 After a satisfying dinner, we walked around Xihu scenic area (西湖区), watched the fountain show before proceeding to Wulin Night Market (武林夜市) for some desert. We tried the black sesame paste（黑芝麻糊）and mango sago (芒果西米露). The black sesame paste was a little too starchy for my liking but the mango sago was milky, cold and refreshing. 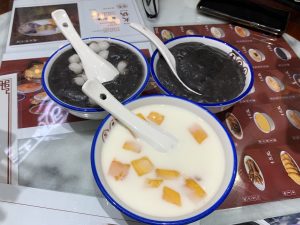 The night market was bustling with people and there were a plethora of stalls selling all kinds of food and merchandise. There was even a stall selling fried insects, scorpions and millipedes… We spotted a Gong Cha stall at the night market too 😉 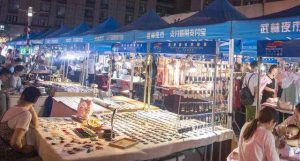 Since it was Dragon’s Boat Festival, one can never leave out eating traditional Chinese rice dumplings (粽子) on this occasion! The dumplings here are sold for around $1 SGD but they are much smaller and have less ingredients in them. Certainly not as satisfying but still as delicious. 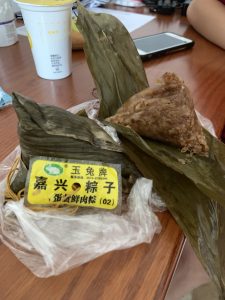 It has been a fruitful week learning more about the Chinese culture! Here’s to traveling out of Hangzhou next week! WOOHOOO 🙂