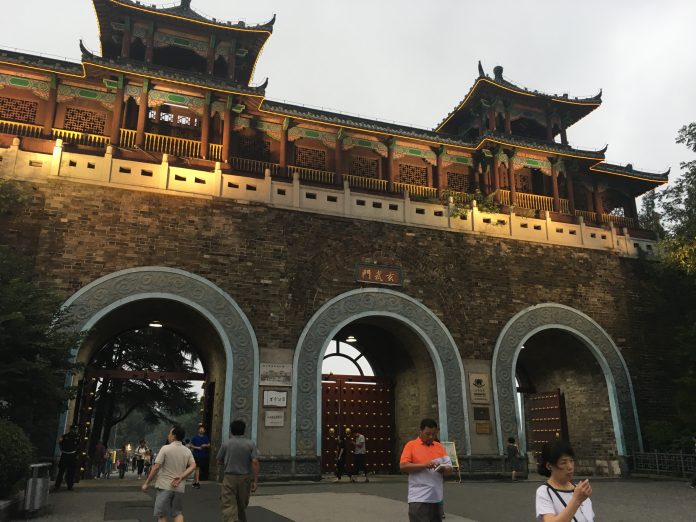 Week 9 was recess week where many of us went out of Hangzhou to explore other parts of China. As each group made their plans to travel, I was in an internal struggle – to join or not to join, got money? is the question. Basically after rounds of indecisiveness and procrastination, I did not manage to join any groups. But I didn’t want to waste the week either, so I bought a Suzhou train ticket for Monday only the day before and yolo-ed to see where it takes me for the week!

As the saying goes, 上有天堂下有苏杭 and I was expecting to see many beautiful sights in Suzhou. After settling in on the first day, I went to 灵岩山 on the second morning before exploring the city sights in the 苏州工业园区 and 金鸡湖 area. The 苏州工业园区 was actually co-developed by the Chinese and Singapore government so it was quite interesting. However, the rainy weather was a wet blanket (literally) and there was a lot of fog which clouded the views, especially at the lake.

The third day was joined by my roommate and we explored the more architectural and natural sights such as 虎丘, 留园 and 寒山寺. It was a good experience until it started pouring and we were stuck. Although we tried to continue exploring the places while braving the rain, we couldn’t really see much. (I did, however, finally understood how bad the holes in my umbrella was…) Overall, I felt that Suzhou was not as pretty as described but it was largely attributed to the weather. I think there are also more suited seasons such as spring and autumn to truly experience and enjoy the beauty of Suzhou. That day, it was time to move on and I bought a train ticket to Nanjing.

I arrived at Nanjing in the afternoon and went to see the 总统府 where presidents such as Sun Yat Sen has once worked at before. I was quite amused at how tourists clamored outside the president’s office to take a picture while the vice-president’s office had no one bothering even though they are right by each other. In the evening, I planned to walk around 新街口 which is like their CBD and shopping street, but had to abandon plan as it started to rain heavily (again).

The morning of Day 2 saw a drizzle which made me push back my plans to climb 紫金山 where 中山陵 was located. Instead, I headed to 南京博物院 to get cultured. The museum was quite diverse with exhibitions on Chinese history and even human civilization. After touring the place, the rain has also stopped. I deliberated on climbing the mountain and decided to go anyway, which was not a good choice because the fog was very bad. When I reached the peak, I couldn’t even see the road anymore, much less the view of the city. But lo and behold, guess what I found when I stumbled through the fog at the highest point of the mountain? KFC!

My next destination was to walk to 中山陵 which I finally conquered amidst the fog, crossing mini rocky rivers and trudging through never-ending slopes. The mausoleum was very majestic and inspiring to see as the final resting place of a great man. After paying my respects, I started to head down and find civilization out of the mountain as it was getting dark. The night ended with a visit to 玄武湖公园 which was really nice with all the lighting at night. I would have wanted to walk the entire area but my stomach and feet were both screaming for help and I had to call it a day.

The third day started at 浦口公园 and 浦口火车站 which was the old railway station of Nanjing, after which I took a ferry across the Yangtze river and biked to Nanjing Massacre Museum. I think it was a solemn and emotional experience as I walked through the exhibitions and learnt more about what happened, which was a different tone from the rest of my trip so far. I think it also sparks reflection about oneself, about the world and how we can never let such things happen again.

The last itinerary of the trip was 夫子庙/秦淮河 area. I thought it was a must to go to pray for my GPA (halps). The temple itself was quite interesting as it had this life story of Confucius and exhibition on the evolution of education through the dynasties. Here, I bought a sicc pen that was guaranteed to help you ace your exams too haha. As dusk fell, I walked around the river area and ate snacks while snapping all the photos I can. It was a leisure walk which continued to 老门东，中华门 and finally 大报恩寺塔. Along the way, it was just a lot of beautiful night views with the lightings and architecture.