Some of us participated in a four day, three-night pottery workshop in Jingdezhen during this week. This blog post will be mainly focused on this interesting pottery workshop that provided us with a very unique cultural experience in China.

It was a long five and a half hours drive to Jingdezhen town, also known as the Porcelain Capital due to its history of pottery production. This town was located out of Zhejiang, in another province, Jiangxi. The ride was uneventful and we passed by Huangshan city on the way, and was able to catch a glimpse of the outline of Huangshan.

We reached Deyu Ecological park at evening time where we checked in to the hotel – a refreshing change from Cuibai. This place is just located beside the Yangtze river, an iconic river and the longest in Asia. This was the place where we will spend the next three days learning and designing pottery. 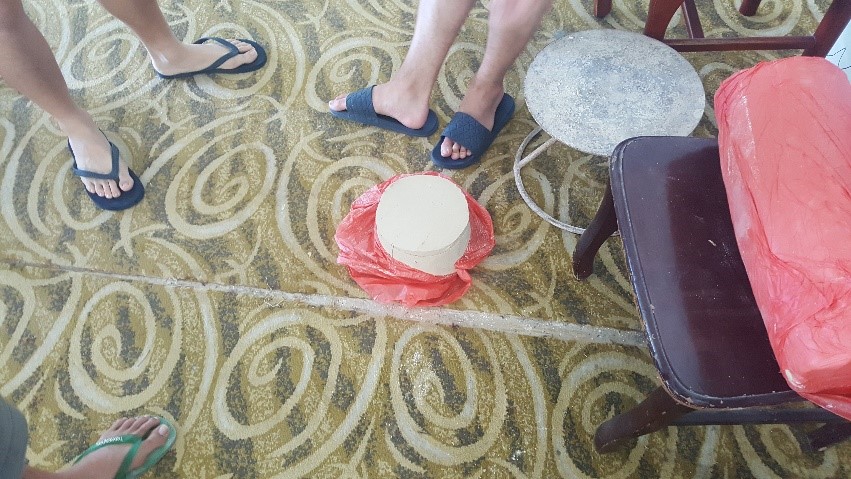 On the first day, we had two hands-on activities on pottery making. The first was more of a manual method using clay and tools provided such as carving tools, fettling knives and pattern rollers. The instructor demonstrated several techniques including layer-by-layer method to form shapes like cups or cylinders. Since it was a first time making pottery for most of us, we found it quite a challenge from the start. In addition to being precise and meticulous, one has to also find the adequate amount of water into the mix.

The next activity was making pottery using the wheel. This wheel is a device that spins at various speeds which you can control. The instructor demonstrated this the first time, making a perfectly symmetrical bowl. It seemed easy enough until you get to try it hands-on. It is a challenge to construct a perfectly symmetrical shape from the wheel. You must locate precisely the center of the wheel and combined with good and delicate fingers to achieve a perfect bowl/cup/clay model.

On the next day we were introduced to the monocoloured painting of a ceramic plate. This activity was slightly easier than yesterday, where it involved more of our artistic skills. Each of us were given a ceramic plate to unleash our creativity upon, and some of us drew and painted picturesque scenes and elaborate paintings. Taking reference from the internet, I drew an owl and used various brush strokes to bring out the image of the picture.

In addition, on the second day we had some time to explore around Jingdezhen town. We went to a place called 冷水尖 which was apparently an ‘AA’ tourist spot, albeit in an ulu place, 5km away from Deyu Park. The cab we called had to go through dirt trails that lead to a small village into the attraction. Upon entrance, we had to further take a car-ride of 4km inside, where there were steps leading up to a small mountain. There were temples perched near the peak of the mountain. After climbing stairs for nearly half-an-hour, we got to the foot of the temple where a nice scenery of the surroundings could be seen. We contemplated on going further but realised that we should make it back before dinner and there was a chance that we could not get any taxi. In the end it turned out that no taxi would want to pick us up and we had to hike all the way back to Deyu hotel, arriving at the nick of time for dinner.

On the third and last day of our course we did a more elaborate painting – using different colours to decorate a cylindrical shaped vase. It was more challenging than the previous day as we had to take into consideration 360 degrees around the clay model. Most of us were able to come up with many unique designs that impressed the instructor and everyone else.

We had to wake up early the next morning at 6a.m. to head back to Hangzhou. It was definitely a unique and memorable three-day experience here in Jingdezhen!

(This blog post is written by one of our team member, Victor Toh)