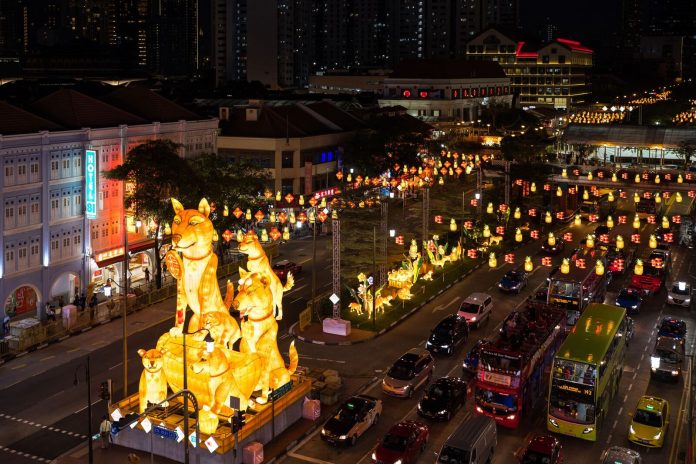 The Chinese New Year is one of the biggest celebrations in Singapore. Also known as Lunar New Year or the Spring Festival, it is often marked by bright colours and sheer exuberance, and in Singapore – it is not complete without the street light-up at Chinatown. Since 2012, the Singapore University of Technology and Design (SUTD) has been an intrinsic part of this tradition as our students’ designs are featured in the light-up.

This year, SUTD is again collaborating with the Kreta Ayer-Kim Seng Citizens’ Consultative Committee (KA-KS CCC) and the Singapore Tourism Board (STB) to design the 2018 Chinese New Year Street Light-up for Chinatown. This year’s team of ten SUTD undergraduate (junior and sophomore) students and one affiliate member, worked on the design concept of the project, under the guidance of Assistant Professor Michael Budig of the Architecture and Sustainable Design (ASD) pillar.

The SUTD team learnt a lot through the collaboration. Throughout the five months the team went through lots of iterations to improve and re-ideate the design concept to bring it closer to the spirit of Chinese New Year. For Kok Shi Yun (Junior, ASD), one of the team members, it was a really fun experience for the team to be able to see how the idea has grown from the first time they decided upon it to when it was displayed in Chinatown and seeing people take photos of their work.

“The KA-KSCCC and STB really helped greatly in bringing the concept of our design to life, from assisting us in budgeting concerns, to collaborating with various partners to manufacture and display the lanterns,” said Shi Yun.

The team also get an eye-opening experience to witness the behind-the-scenes of how the lanterns are made.

“It was interesting to find out that the lanterns are hand made by the Chinese craftsmen, from twisting the metal frames, to manually trimming colored cloths to paste on the frames, to hand painting the lanterns. All in all, our team learnt and grew tremendously from this project collaboration and we have definitely received a new form of appreciation and understanding towards the Chinese New Year Festival,” said Shi Yun.

Transforming the streets of Chinatown

Taking inspiration from how Chinese New Year is celebrated at the turn of the lunisolar Chinese calendar, the design emphasises the gradient colour changes between seasons and the meanings associated with them. With an overarching theme of “Four Seasons and Reunion”, the lights take on four flowers associated with the different seasons: Orchids (Spring), Bamboo (Summer), Chrysanthemums (Autumn) and Plum Blossoms (Winter)

“This year’s light up differs from the past years in terms of the bold use of colors, traditional flower elements and Chinese proverbs to emphasize on the Chinese cultures of Chinese New Year. A mixture of pink, green, yellow and red colors were used to represent the different flowers in“四君子”,which was a traditional Chinese literature writing on the flowers in the different season of the Chinese culture,” explained Shi Yun.

Furthermore, the team did not want the exhibition to be merely decorative, but also to allow people to interact and engage with it as they enjoy the lights. Compared to previous years whereby the light up is always an isolated segment that people can only take photos from afar, this year’s light up includes many 3D Dog installations that are placed at various spots in Chinatown. “We believe allowing people to take photos with the installation up-close will make the visitors feel much more connected to the exhibition,” added Shi Yun.

As 2018 marks the year of the Dog, the team focused its early stage of extensive research on the Dog zodiac, in addition to historical and cultural connotations and auspicious symbols of the Chinese New Year.

They decided on highlighting the dog as an epitome of family bonds as the dog is widely known as a loyal and friendly family companion. The team crafted a narrative, parallel to the concept of the four seasons, depicting the growth and life journey of a dog through time. The design shows the transitional changes in a dog’s life from birth, to growing up with companions, to undergoing hardship and coming back home for reunion. These ideas are translated into crafts that are scattered along Eu Tong Sen Street.

“Furthermore, since dogs have always been known as man’s best friend, we decided to come up with a series of interactive photo spots where visitors could pose with the installations to depict the close, supportive relationship between dogs and humans”, explained Shi Yun.

Check out some of finished installations in the gallery below.

The official Light-Up and Opening Ceremony was held on 27th January 2018, followed by seven weeks of street light-up along the streets of Chinatown.