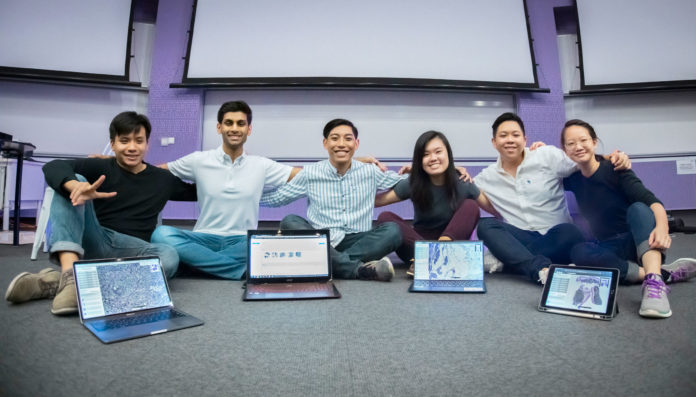 David, a senior cancer researcher, arrives early at his lab and settles down in front of his microscope. He reaches for a box of histology slides – small pieces of rectangular glass plates, each with a tissue specimen suspended within – slides he didn’t have the time to go through the day before.

He removes one of them and slips it under his microscope. His workday begins. 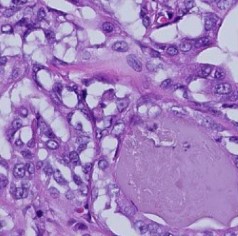 Magnified 400 times, the tissue sample is now a massive landscape of intricate shapes and patterns, and David commences his laborious search for mitotic figures – or replicating cells – an important indicator of the malignancy of the specimen he’s studying. Simply put, the more mitotic figures, the more malignant the sample.

Now here’s a chance for us to play David. The square image here is a snapshot of what he’s seeing through his microscope. Mitotic figures, as histopathologists would describe, are dark, elongated or abnormally shaped ‘blobs’. There’s one such blob in David’s field of view (or microscopic view). Can you spot it?

Clue: it’s in the bottom half of the image. 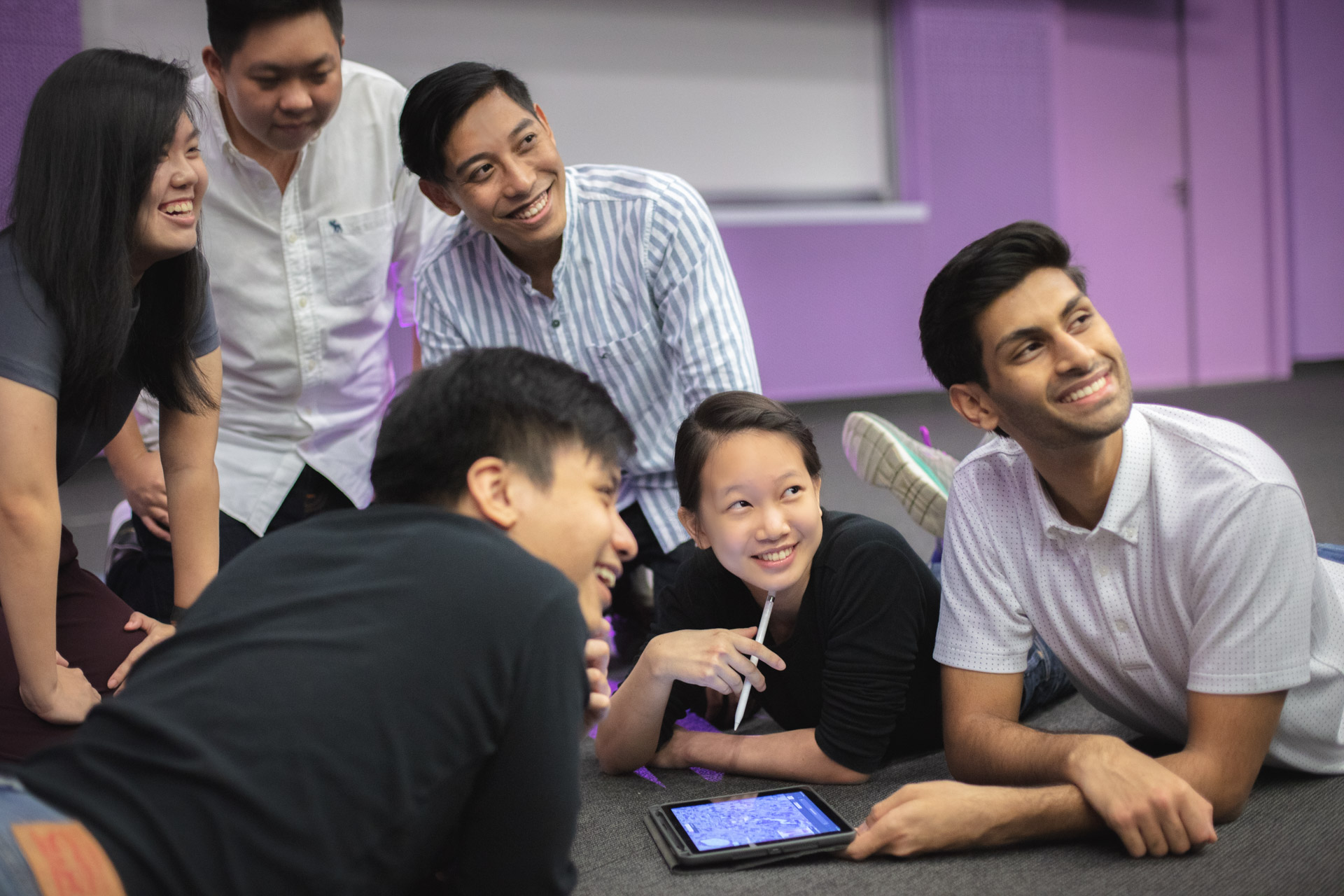 The heroes assemble
Back in SUTD, a group of final year students – Safa, Beverley, Lionell, Krishna, Kenneth, Ashlyn, and Tzu Shieh – sat huddled over a workbench, throwing out ideas for their Capstone project.

The students came together even before they decided on what they were going to do. “I guess that’s the good thing about being here in SUTD,” Safa begins. “We have this inter-pillar, interdisciplinary kind of interaction going on, so some of us already knew each other, and some of us have worked together before,” he says, gesturing to some of his team members. 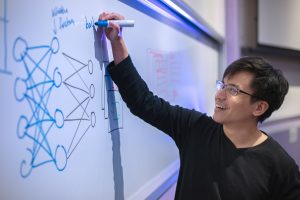 These prior interactions made it easy for them to build a team that they wanted – a team that has “different capabilities”, as Safa describes. “That way, we don’t have to be limited by what we could build. With our range of expertise, we could explore so many more options.”

With a straight face, Lionell agrees. “This is a pretty solid team,” he says. Everyone bursts into a bout of laughter.

With this freedom to create, imagination was their only limit. 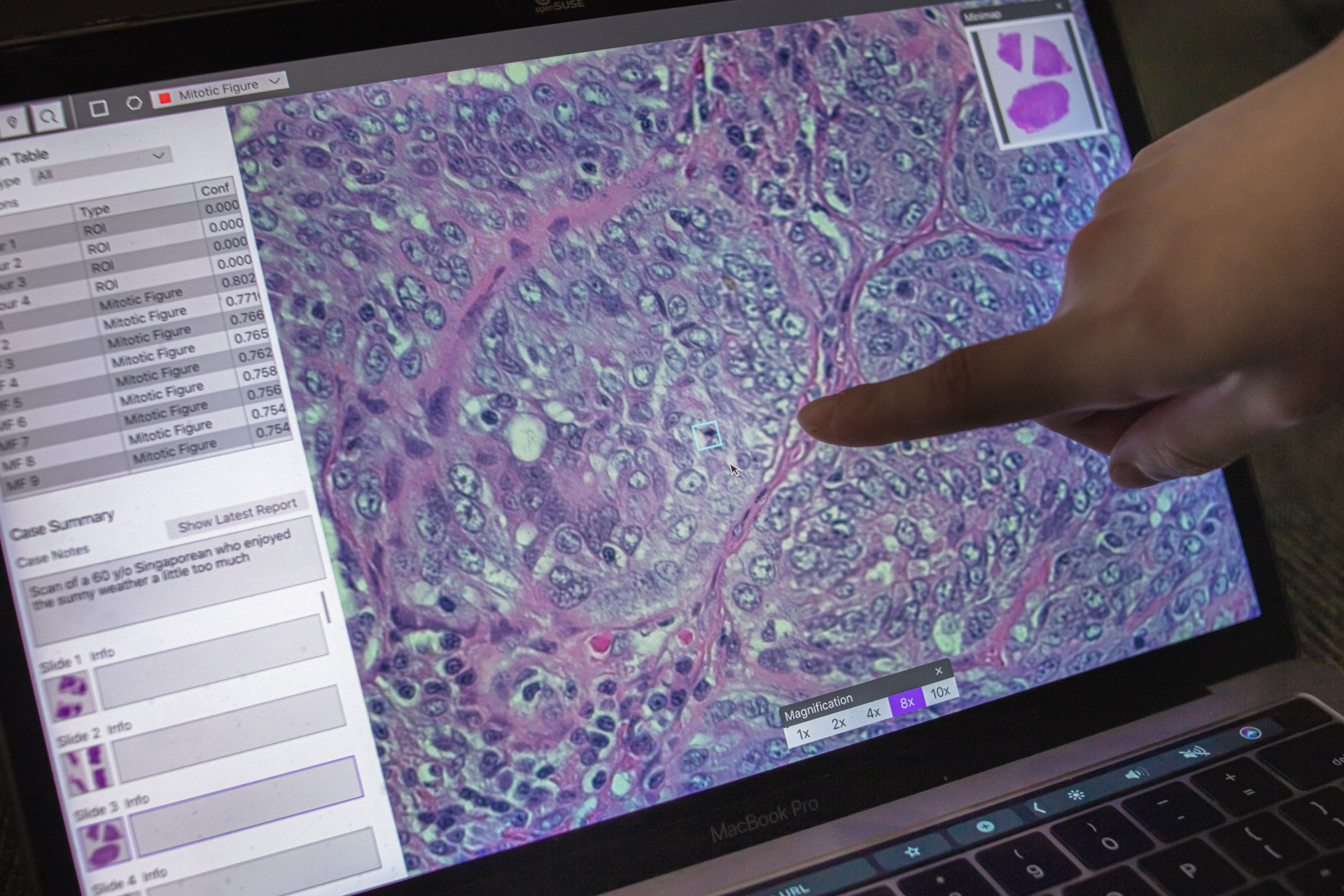 Taking on a big problem
Lionell continues, “We had a lot of ideas initially. But as cliche as it sounds, we related more to one of the problems.”

“Krishna previously worked for Qritive, a company that creates AI diagnostic solutions for histopathology (the study of diseases through microscopic tissue),” Safa explains. “They build products that help with cancer diagnosis for clinical usage.”

Cancer, as the team shares, is the second deadliest killer in the world. “But given the scale of the problem, cancer research is severely under-represented,” Krishna elaborates, “So it’s not an overstatement to say that there are too few researchers out there doing cancer research.”

The team saw a need to make cancer research more efficient. To help researchers like David, the team approached Qritive to be their industry mentor, and Qurie was born.

Say hello to Qurie
Qurie is an all-in-one, AI-augmented, digital histopathology platform designed to streamline the work of cancer researchers. 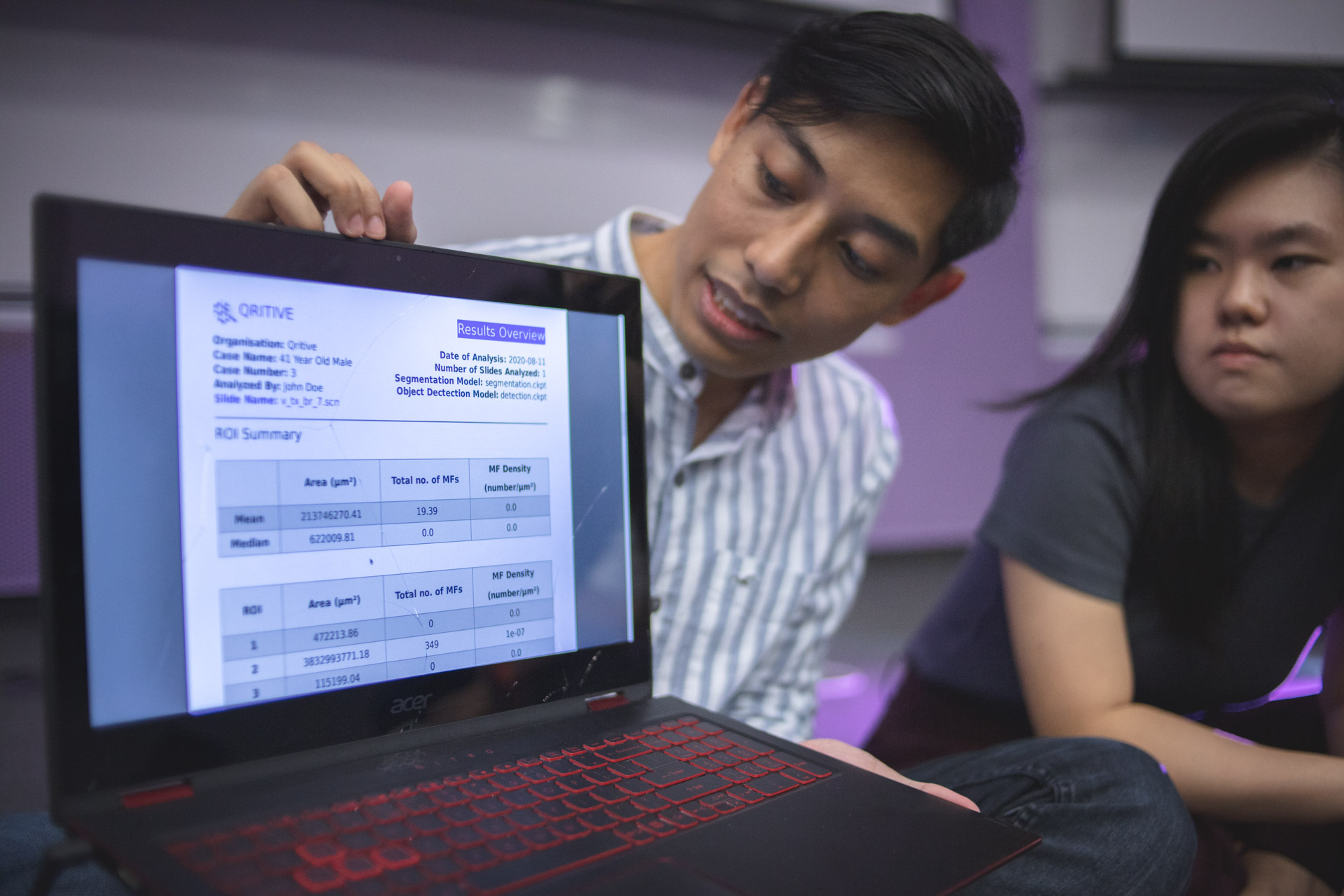 Remember the blob we mentioned earlier – did you manage to locate it? If you found it difficult, you’re not alone – it’s actually just as tough for trained professionals like David. It also doesn’t help that these mitotic figures are merely 10 microns wide –  that’s 200 times thinner than a human hair!

On average, it takes about 30 minutes for a researcher to analyse 10% to 20% of the entire slide (that’s one tissue specimen) – or about 10 of those fields of view you saw earlier. It’s a tedious and time-consuming process that demands the full attention of experienced researchers – valuable human resources that could be better channeled into more meaningful work, such as drug discovery and research.

Fortunately, this is where Qurie comes in.

Qurie: researcher-in-training
One of Qurie’s most important purpose is to take over the tedious task of counting mitotic figures. To make sure it’s qualified for this critical task, the team trains the AI by feeding it huge volumes of professionally annotated histopathology images. 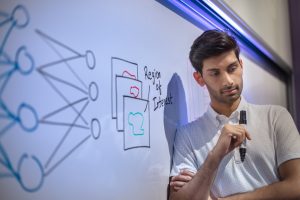 “We have two main tasks for the AI,” Krishna details. “The first is identifying regions of interest, or tumour areas. This task is also known as segmentation. The second is what histopathologists would call mitotic figure identification.”

After Qurie completes both tasks, it merges the results to derive the Mitotic Activity Index (MAI) – an important number that pathologists use to determine the malignancy of a tumour. 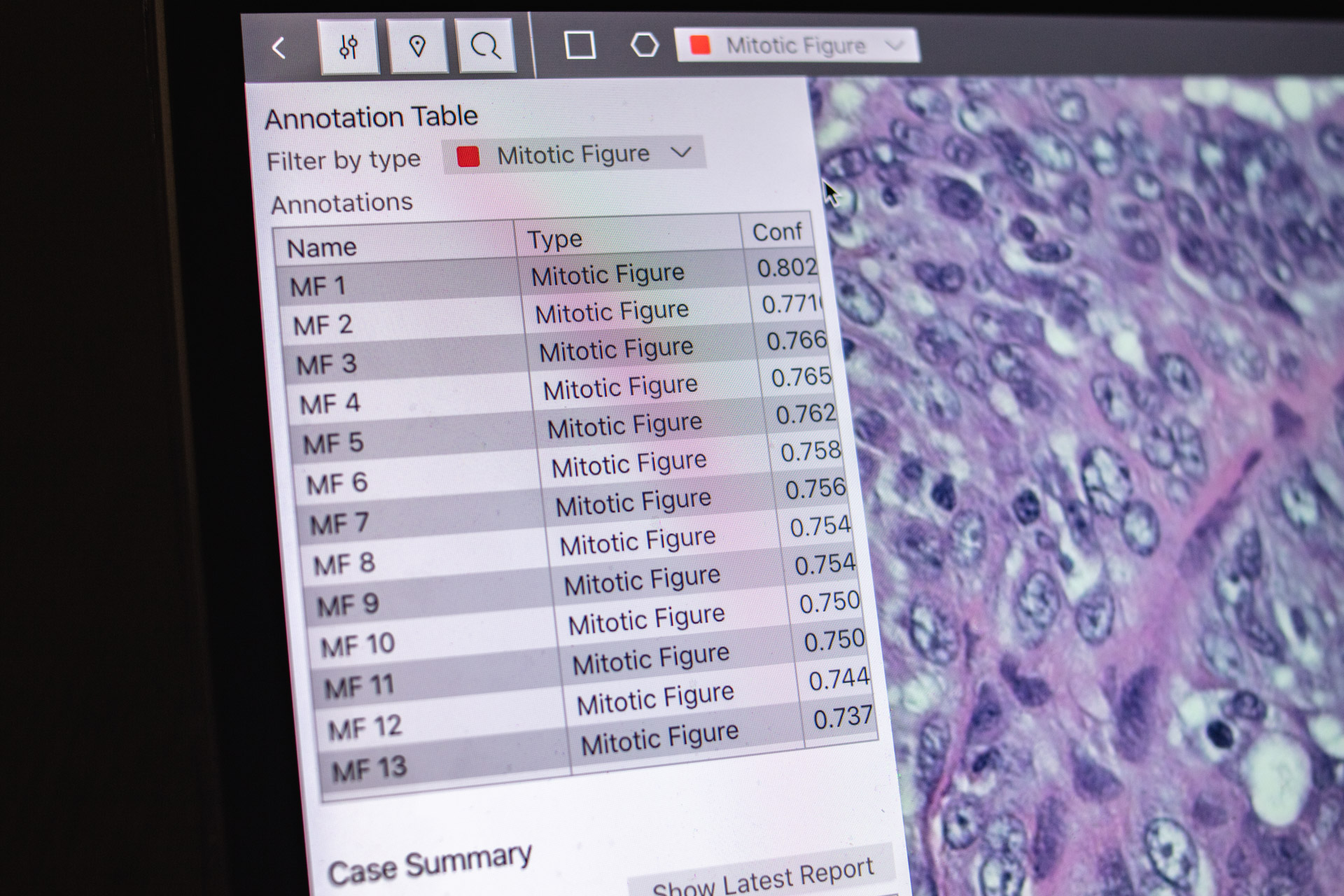 A stellar report card
The results have been encouraging – it took Qurie just eight minutes to analyse 100% of the slide and generate a report. For comparison, on a per slide basis, that’s about six times faster than David, minus the report generation. Another difference is that while David is only able to examine ten fields of view individually, Qurie is able to analyse the entire slide – meaning that Qurie could work roughly 1,500 times faster than its human counterpart in terms of area analysed per minute. “Even without taking into consideration the fact that you can run Qurie overnight, it’s already a lot faster,” Safa laughs. 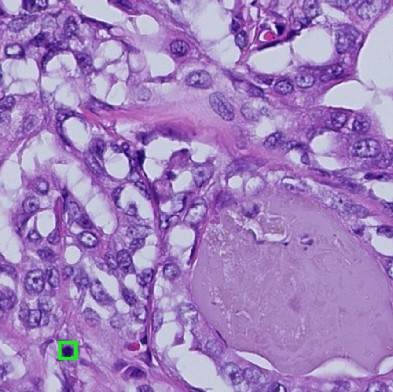 Let’s get back to the blob – want to know if you’ve correctly identified the mitotic figure? We’ll let Qurie tell you the answer:

Did you manage to find it?

Besides speed, Qurie also delivers in terms of precision and accuracy. Its analysis is comparable to that of a human’s – sometimes even better. When it comes to segmentation, Qurie can create boundaries that are more precise than what cancer researchers can annotate manually.

Friendly in every aspect

Of course, Qurie can’t become an AI super intern by just being a one-task wonder. Besides counting mitotic figures, Qurie also serves as an intuitive, end-to-end platform that researchers can use to 1) view, magnify and annotate images, 2) generate and review customisable reports, 3) share research information, 4) create case files, and 5) collaborate with other researchers – all within a single platform.

“In terms of design, we wanted to make Qurie really simple and user-friendly,” Kenneth explains. “You don’t need to be familiar with AI to navigate and understand what this feature or that button does. We wanted to give them a point-and-click experience.”

“That’s also why we named Qurie, Qurie,” Safa adds with a smile. “We designed it to be simple to use. Like a ‘Qurieee’ instead of some austere sounding (in a forceful voice) ‘pathology platform’ kind of thing!”

A cancer researcher’s super intern
Back in David’s lab, he’s no longer spending his mornings counting cells and studying slides. Instead, he checks on Qurie to make sure the insights and predictions generated are accurate.

“We call this the hybrid model,” Ashlyn illustrates. “Where we combine the speed of AI analysis with the reliability of human experience to maximise accuracy and efficiency.”

“Ultimately, we think technology should augment, rather than replace,” Safa adds. “We really hope Qurie can supercharge the workflow of these researchers and improve their efficiency, so that they can spend more of their time on making meaningful discoveries within the field of cancer.” 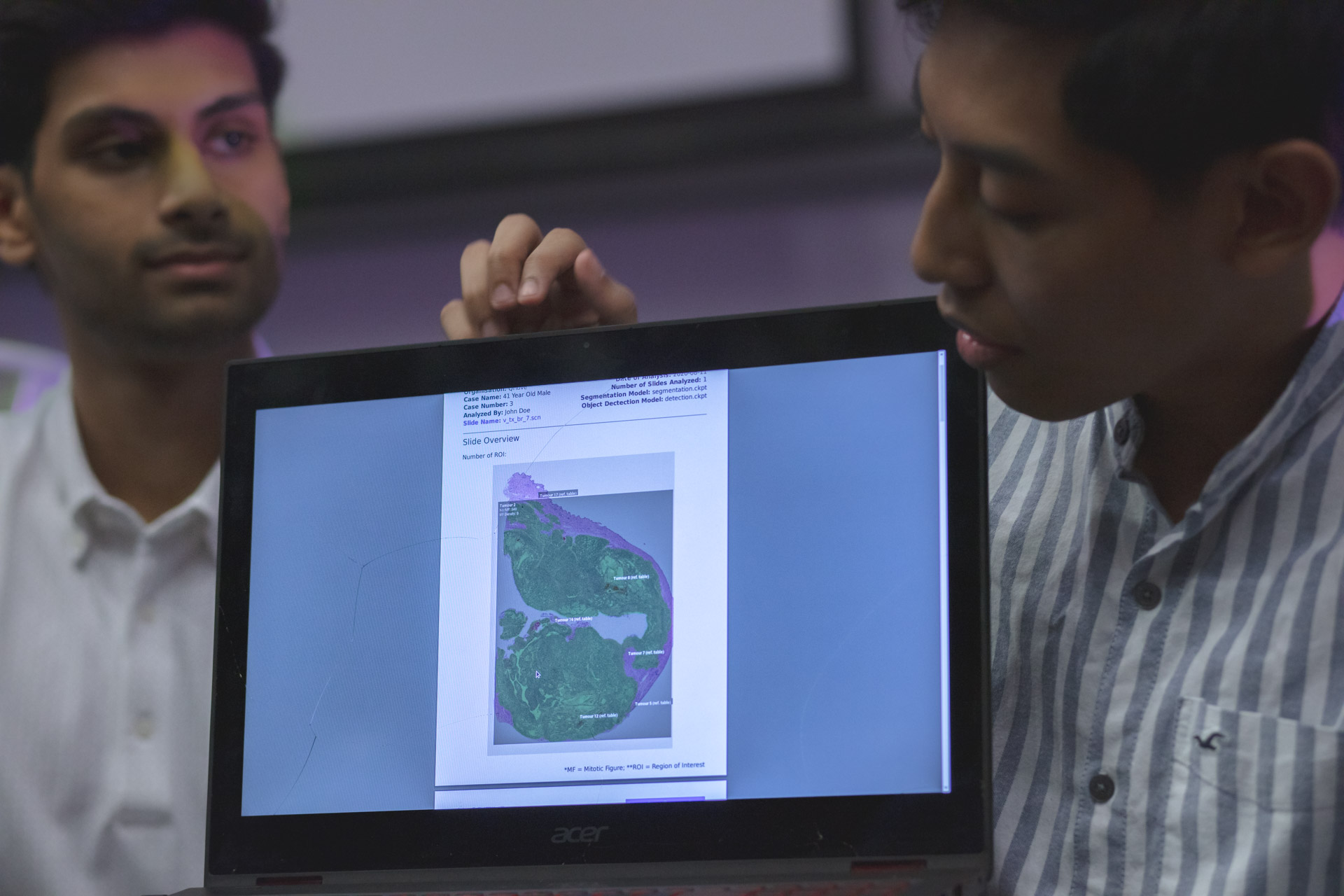 From Capstone intern to real-world professional
The future for Qurie is a bright one. Qritive has taken Qurie under its wing and there are plans to deploy the budding platform to benefit many more Davids. You can say that Qurie the Capstone intern has graduated to become an industry professional.

“This is very exciting for us because it’s really unlike most school projects where you complete the task and then that’s it. This actually has tangible uses and applications,” Safa says proudly. “It really gives us an immense sense of achievement.” 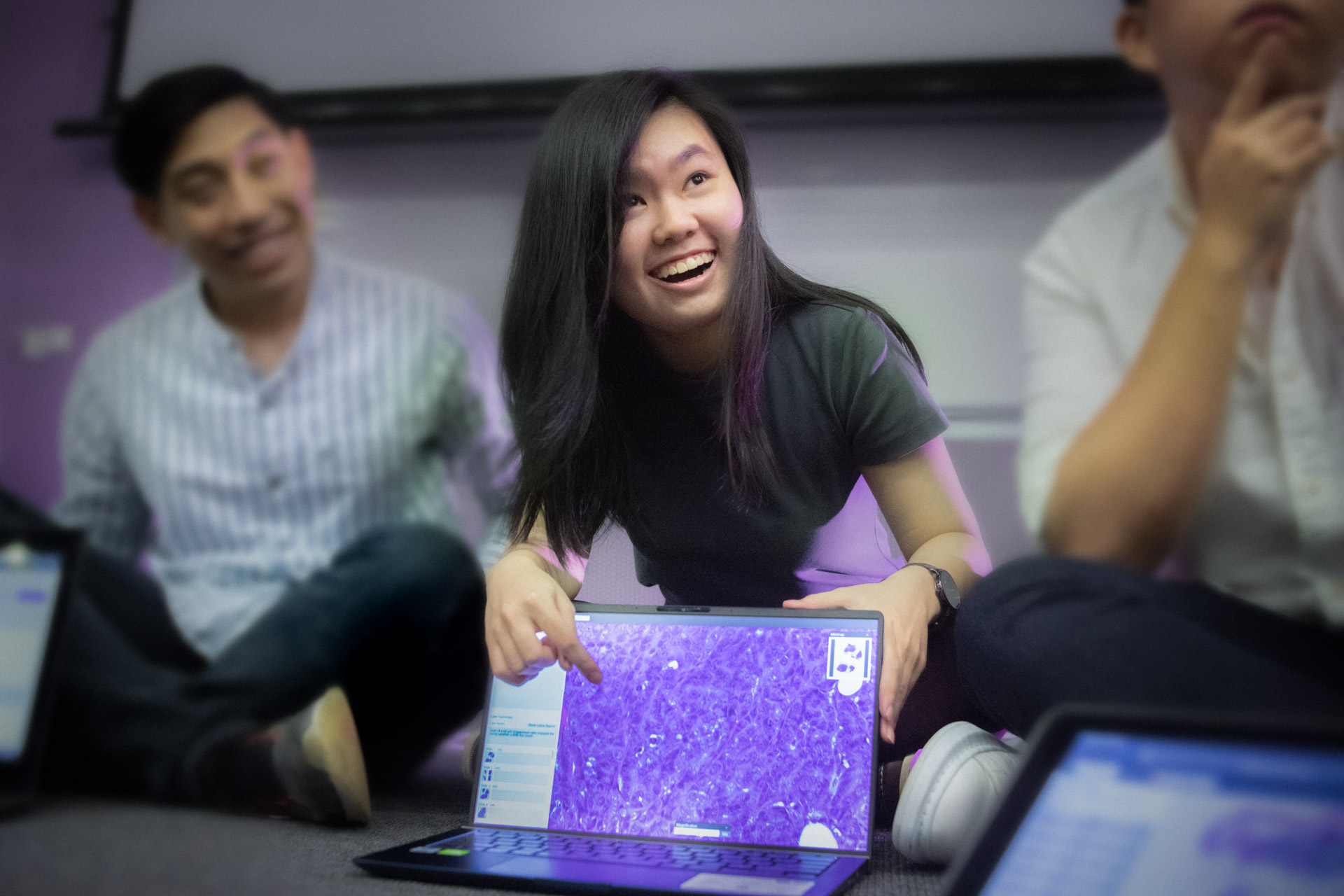 Qurie and the future world
For the rest of us, Qurie has demonstrated its ability to complement highly skilled professions, a feat that we previously thought impossible. Traditionally, it takes around ten years for a medical professional to become a pathologist; a specialised field limited to only a select few.

But Qurie is about to change that.

“Technology definitely has the potential to democratise more of such niche work and reduce gaps in these areas,” Safa elaborates. “It has the ability to place accessibility in the hands of many more people. Not just pathology experts, not just medical experts, but humans, in general.”

Check out the Qurie page on our Capstone Design Showcase 2020 website for more videos and information!
https://capstone2020.sutd.edu.sg/projects/qurie

Find out more about our admission requirements and application details here.