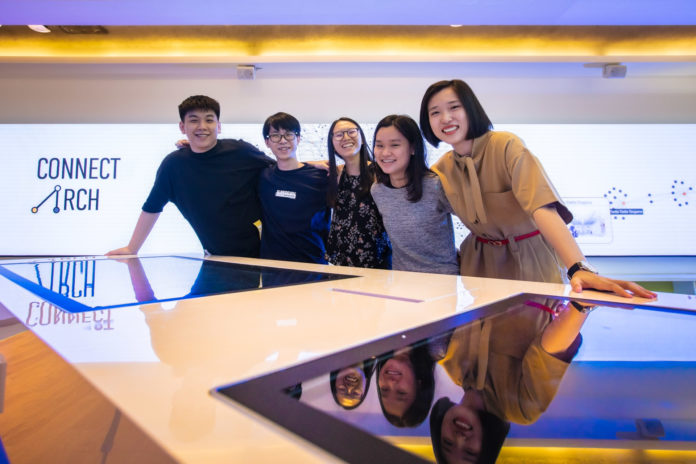 For most of us who aren’t students of architecture – or architects themselves – it’s tough for us to understand the problems they go through as they learn the ropes of the craft.

You see, architecture students don’t have a standard set of textbooks or formulas they can rely on to learn architecture. Professors teach through what they call “procedural knowledge”, or in simpler terms, their own experience. As a result, a large part of architectural study hinges on what architects call “precedents”.

This is where CONNECTARCH comes in. Students and professors from SUTD, and industry partner ONG&ONG Group have come together to conceive and develop an AI-driven and easy-to-use platform for architecture students and enthusiasts alike, to access the world of architecture quickly, even without any prior knowledge of architecture.

What is a precedent?
A definition by researchers describes precedents as “a representation of the knowledge about a past design in a form that makes it applicable or ‘reusable’, in new, but, similar problem situations.”

In other words, precedents are “like past examples,” Christy explains, “they are real-world projects that we use as case studies to learn architecture. And they can be anything – from buildings to master plans to even furniture.” 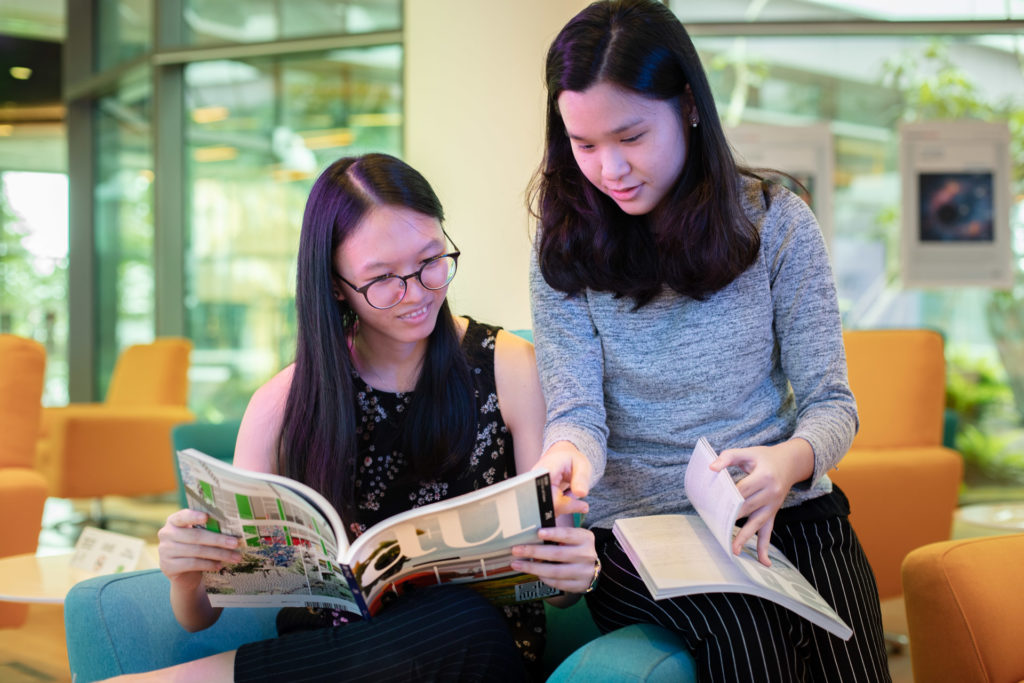 Let’s design a museum
Now let’s try to put ourselves in the shoes of an architect for a minute. Let’s say we’ve been briefed to design a museum. Where do you start? According to a survey by the team, 96% of architecture students look to precedents to conceptualise their projects. So if you’re the majority, that’s where you’d start. But where would you look? 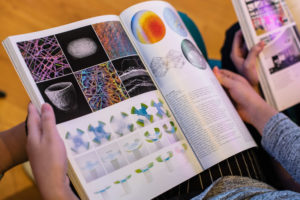 “There’s ArchDaily and Dezeen, which are websites and magazines,” Siao Si recounts. “Then there’s a+u, a print-only publication, and of course, Pinterest and Instagram.”

Right, so that’s where we’ll look for our precedents too – but that’s also where the problems begin.

The problem with precedents
As you progress with your search, you’d realise that the precedents you’re looking for are scattered across disparate sources, each with their own little bits and pieces of relevant information.

They’re in publications that tend to report on “modern and current events”. They’re on social media that aren’t even designed for architecture in the first place. “We end up watching random cat videos half the time,” Christy quips cheekily.

And on many occasions, students and architects alike “end up having 50 tabs open on their browsers just so they can see every precedent they want to see,” she continues. Even then, students are finding it difficult to access certain precedents, especially those that are foundational to the field. They’re either less discussed, or inaccessible.

Our team of seven ASD (Architecture and Sustainable Design), ESD (Engineering Systems and Design) and CSD (Computer Science and Design) students recognises this problem. Which is why they’ve decided to pool their expertise to create a universal platform where architects can go to for access to curated and holistic architectural content. And that platform is CONNECTARCH. 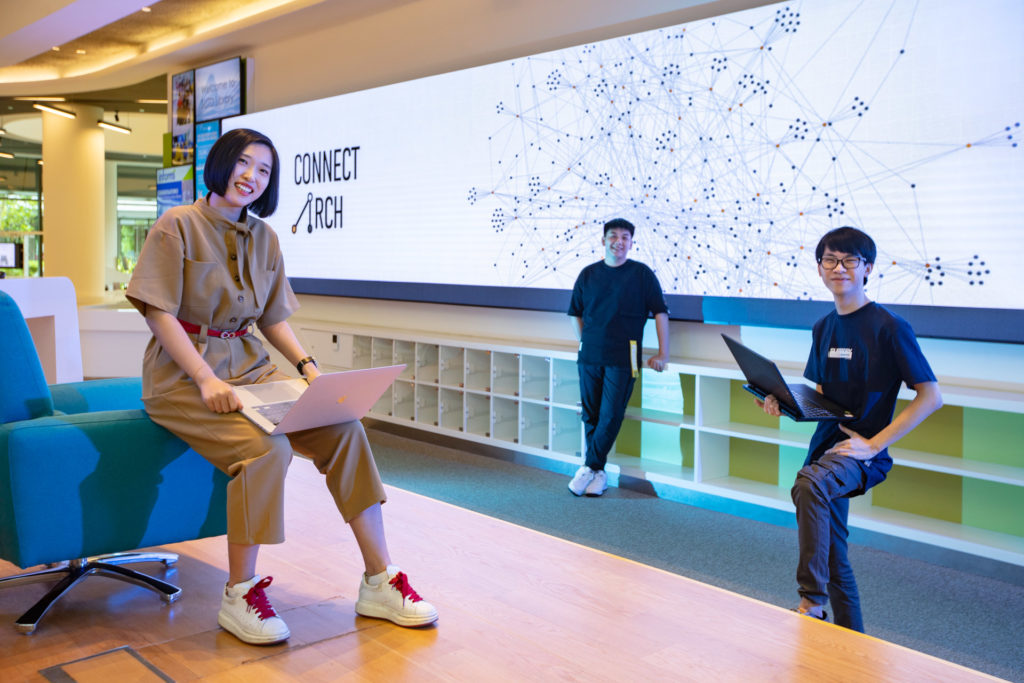 An architect’s virtual library
“CONNECTARCH is a platform that architecture students, professors, and even professionals can use to explore architecture,” Siao Si summarises. “It features a recommendation system that recommends precedents to users based on their preferences and use cases.” 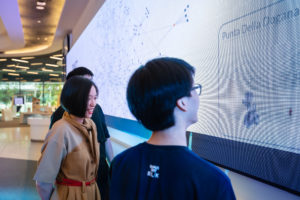 To put it simply, we can imagine the platform to be like a virtual library. But instead of books, we have what Christy calls “precedent cards”. These are files that contain information for every precedent in the library. Unlike regular libraries, these cards will not be filed away in silos. Rather, they reside on a dynamic and interconnected map that the team calls a “knowledge graph.”

Nodes and edges on the knowledge graph

“The knowledge graph is made up of what we call nodes and edges,” Ming Bing explains, “yellow nodes represent the precedents while the grey ones reflect their properties – like materials used, location, architect(s) involved and so on. The lines (or edges) indicate the connections between them.”

Now if the platform is a library, then the knowledge graph has to be the librarian – your personal librarian, that is. The graph is essentially the brain of the system, and it offers recommendations by learning your interests through a combination of two methods – content-based filtering and collaborative filtering. 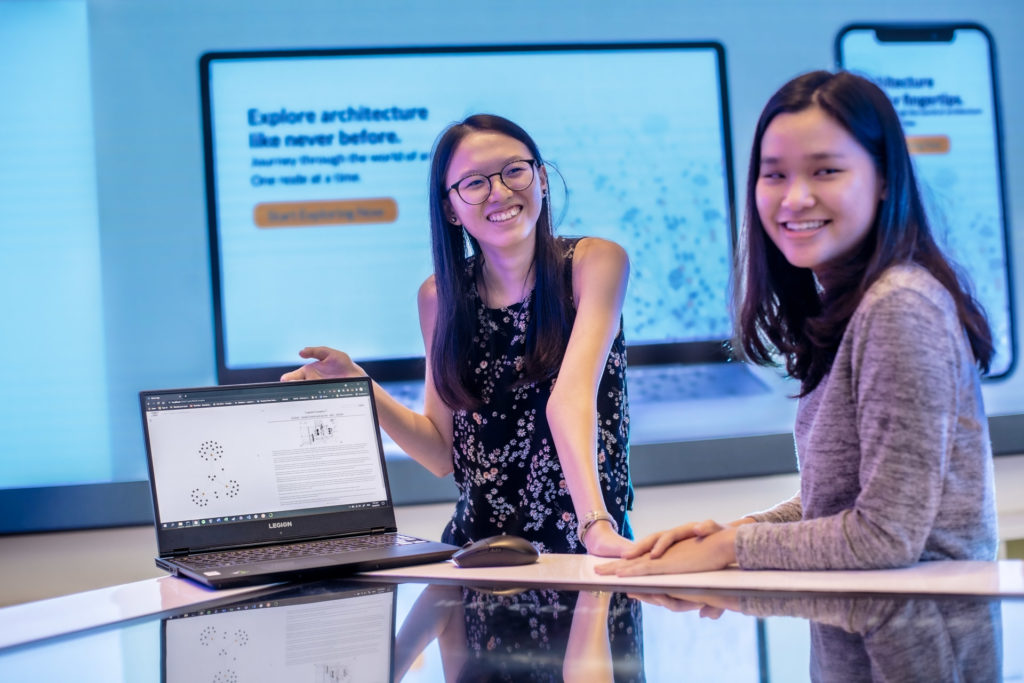 Drawing connections with content-based learning
Now let’s go back to our “design a museum” brief early on. As first-time users, the platform will first ask some questions to get a sense of what you’re looking for. Your responses will kick-start its “content-based learning” process. 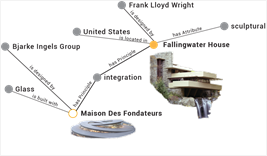 Exploring the various connections in the knowledge graph

So let’s say you’re inspired by watchmaker Audemars Piguet’s museum La Maison Des Fondateurs, and you’re keen to explore precedents that share its similarities. Based on the graph, your librarian will recognise that the museum is connected to Fallingwater House by the principle of integration, and make that recommendation (see image above). 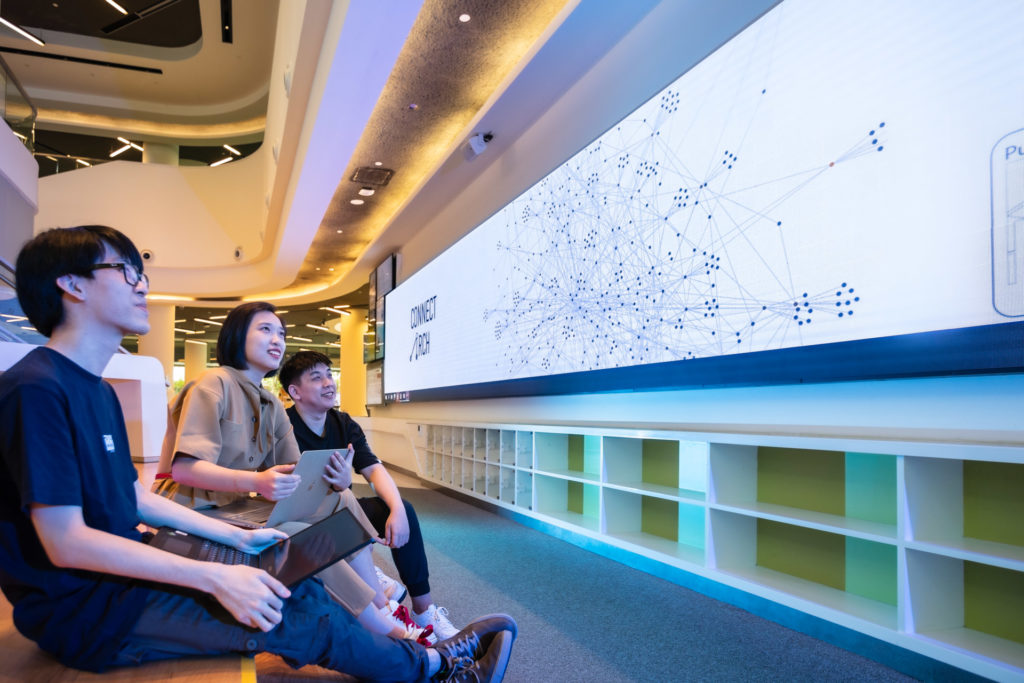 As you click through the graph, the system will remember your interests and intuitively make adjustments to future recommendations as it picks up on your usage patterns. 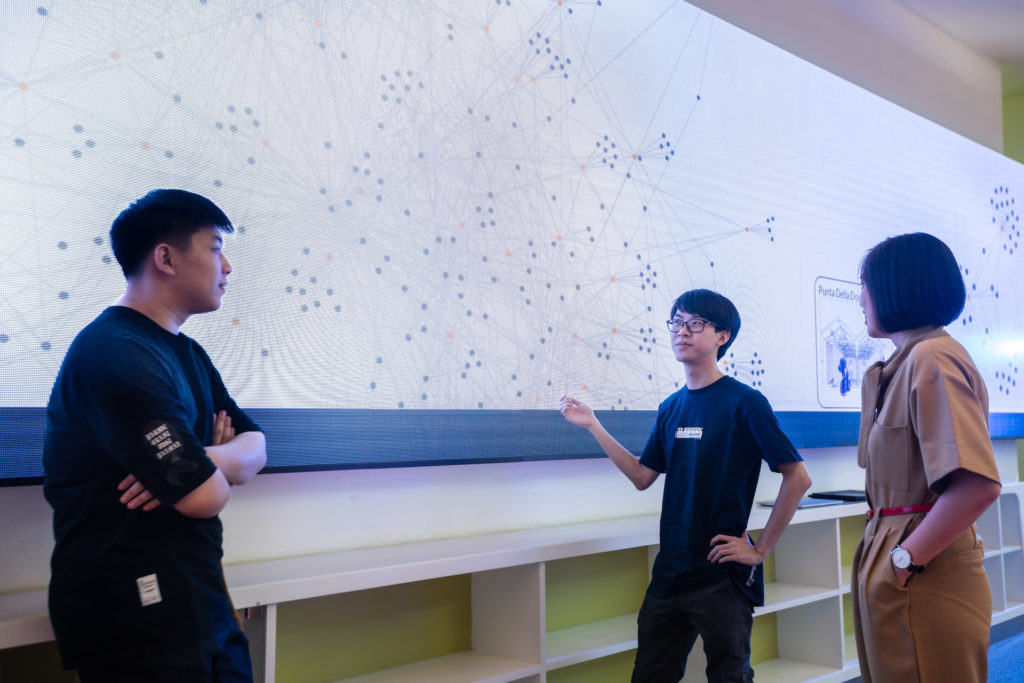 This is an AI-powered approach where the system (or your personal librarian) understands your preferences by analysing your inputs. “It learns through what we call reinforcement learning,” Ming Bing explains. “If the recommendation receives a good rating, it’ll reinforce that action. Otherwise, it gets a penalty and discourages it from happening again.”

As more data comes in, the knowledge graph will start to lean less on content-based recommendations and more on collaborative results, where more positive and personalised recommendations can be predicted based on aggregated inputs from you, as well as others in the community.

“Multi-project” friendly
What’s even better, the team has designed the platform to allow the creation of multiple projects. 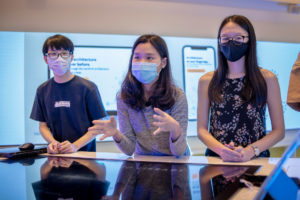 What this means is if you were to design two museums – one that’s inspired by La Maison Des Fondateurs, and the other, a more functional one with lots of natural light – you’d get two entirely different recommendations because of your differing goals and actions. “This allows architects to explore multiple facets of architecture design concurrently,” Christy adds proudly

A rather rough start
At this point, the team is happy that the platform has performed “really well” and that their users are generally satisfied with the system. But it wasn’t easy getting to where they are right now. 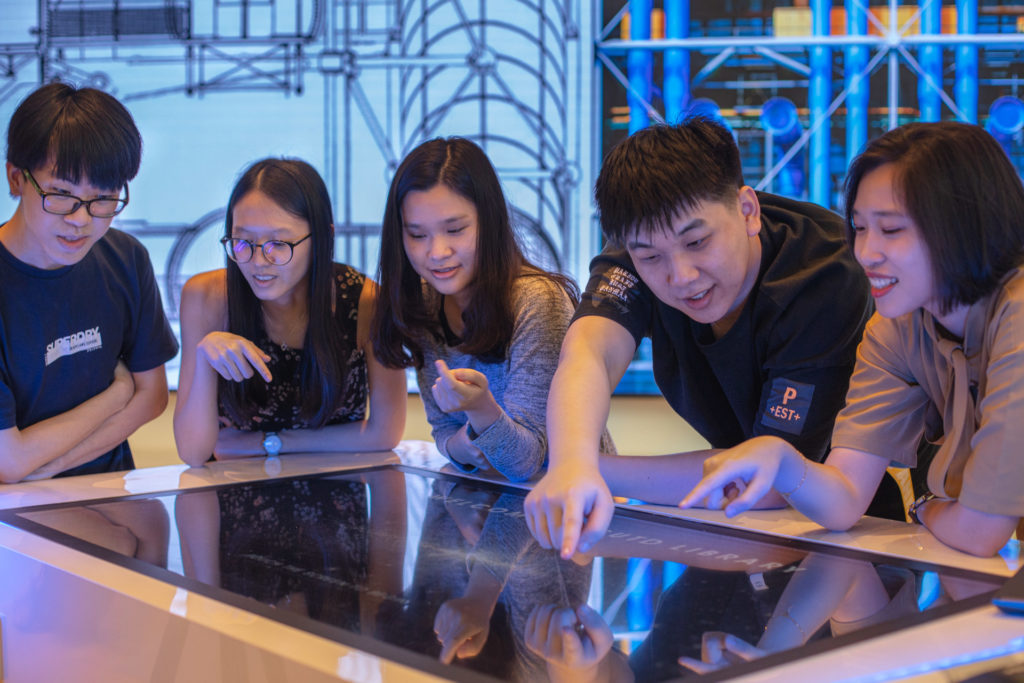 The reason why the team created CONNECTARCH is also the same reason why they struggled to come up with a solid idea at the beginning: a lack of cohesive architectural data. And when they finally had a breakthrough, they were way behind their peers in terms of their Capstone project progress.

“But I think being in SUTD has given us a certain sense of tenacity when it comes to rush projects,” Christy laughs. “We just need to have the ‘just try’ mentality, take one step at a time, and believe we’ll get through it somehow.”

“And maybe sleep a little less!”

Seeking professor-nal help
The professors’ approachability also helped to get the group through its toughest times, as Jinling shares. 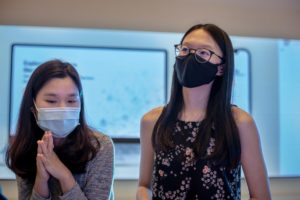 Christy agrees, “I remember having trouble understanding computer science at the beginning. It’s like a different language,” she continues, “but Prof Matt was really nice to give us small lectures on what everything is about so we can have a basic understanding of all the concepts needed to pull this whole project together.”

The nexus of architecture
As for CONNECTARCH, the team’s industry mentor, regional multi-disciplinary AEC firm, ONG&ONG Group, will take over with plans to develop it further for professional use.

Ultimately, what the team hopes for CONNECTARCH is for it to become a nexus in the field of architecture.

“Through the connections made, it’s possible that the graph itself has, embedded in it, patterns and ideas that were never explicitly documented. So in the end, we hope the platform can give users a truly holistic view of architecture, and help them get to a level of understanding that has not been there before,” Siao Si concludes.

Have a query for our students and/or Admissions Team? Speak to them here! 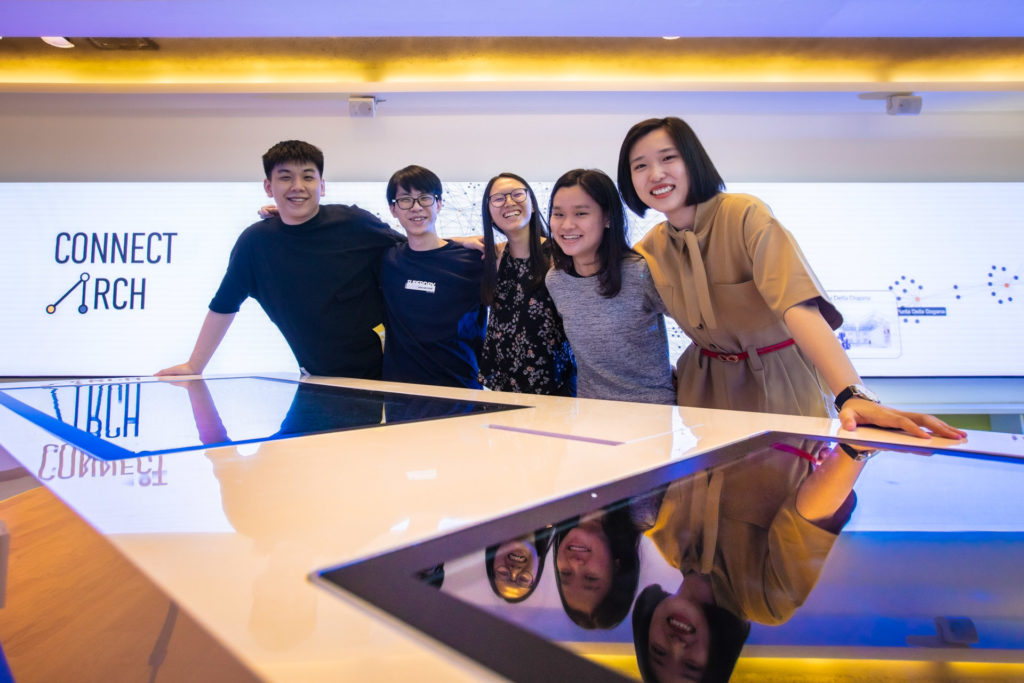