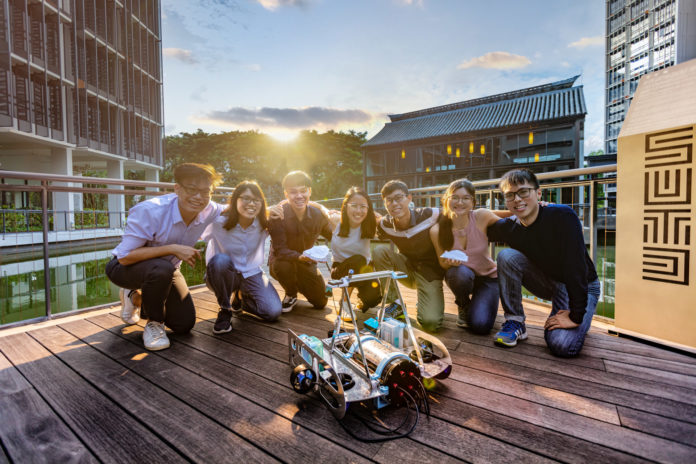 Marine biologists are still using manual methods to monitor the health of Singapore’s reefs. But Corabot is about to change that.

It’s 12pm, the hottest time of the day. Due to Covid restrictions, Lewin and Wei Song were the only two out of their seven teammates allowed into the campus pool – with only a two-hour mid-day window to test their prototype.

With a laptop in one hand and a smartphone in the other, Wei Song recorded a footage of their experiment, while maintaining control over their autonomous underwater vehicle (AUV). Meanwhile, Lewin prepared the prototype for submersion, silently hoping that water wouldn’t breach his external battery pack again. 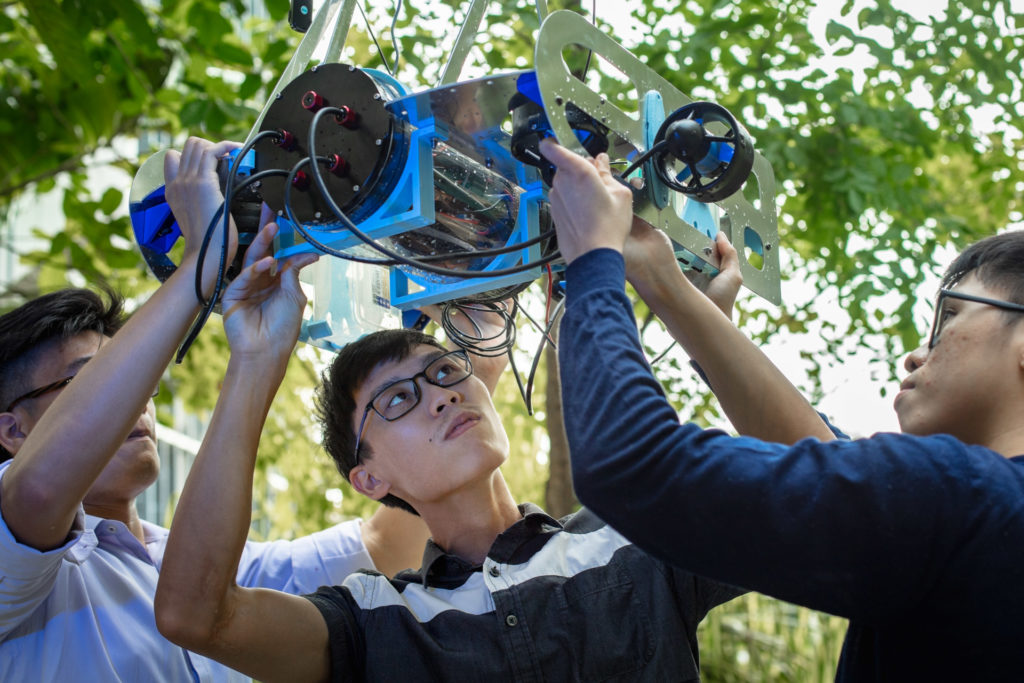 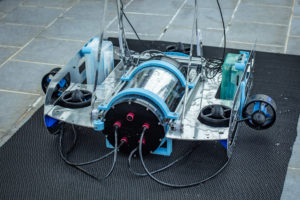 “We didn’t expect waterproofing to take such a long time,” Lewin recounts, directing our attention to what looks like an airtight plastic food container strapped to a corner of the vehicle. “We kept iterating, iterating and iterating until we finally found something that worked. Surprisingly, it was a $2 Daiso box that (literally) sealed the job,” he continues with a laugh.

A design approach to problem solving
Right from the start, our bubbly team of EPD, ESD and CSD students knew their Capstone journey wasn’t going to be easy.

They started off with a broad topic outlined by DSO, (where Jamie used to intern). “The big idea was for us to design an autonomous system that could facilitate and improve the collection of oceanographic data,” Jamie explains.

It was a topic that could be interpreted in many different ways. Most people would “dive in to find a solution and come up with something that studies water salinity, for instance,” Jie Lin commented. But as students grounded and trained in design thinking, they took a problem-centric approach to tackling the challenge. 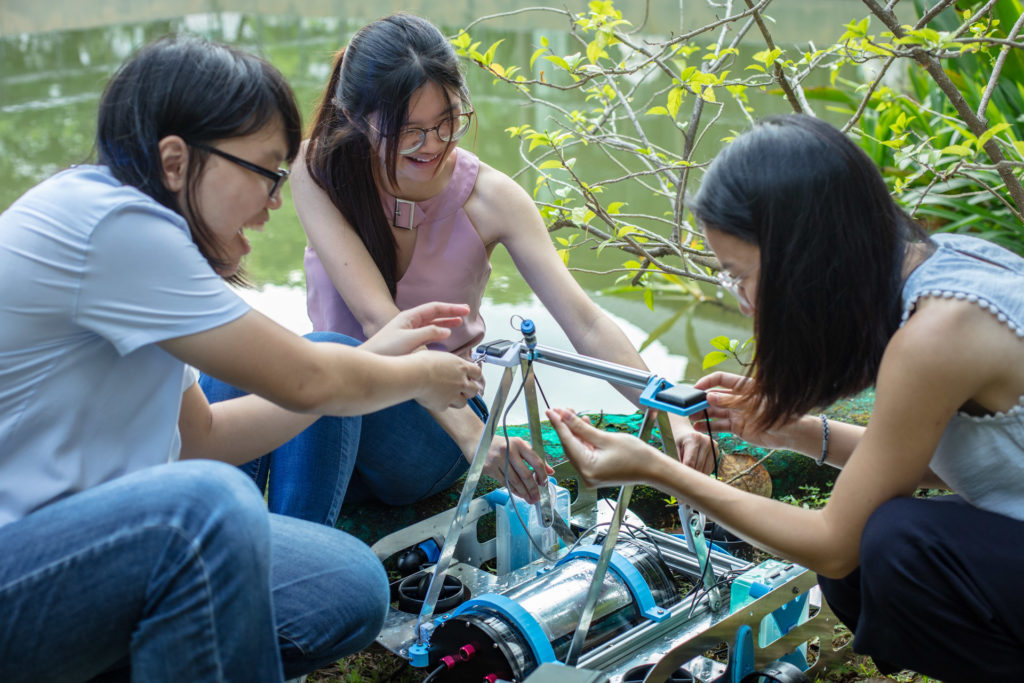 “We analysed the entire problem space and came up with as many problem statements as possible,” he explains. “15 to be exact, before we decided on coral reef monitoring,” Jamie adds. “It was an area we thought was facing the greatest number of problems.”

The reef situation in Singapore 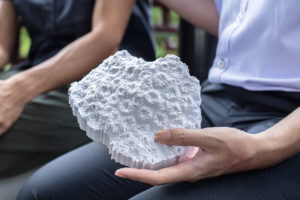 Little known to most of us, Singapore is home to a third of the world’s coral species. Yes, we actually have a huge collection of beautiful corals! But between 1953 and 2012, the total reef area has declined by over 60%. This is why coral conservation is an urgent challenge, and reef monitoring plays an integral role in supporting that. 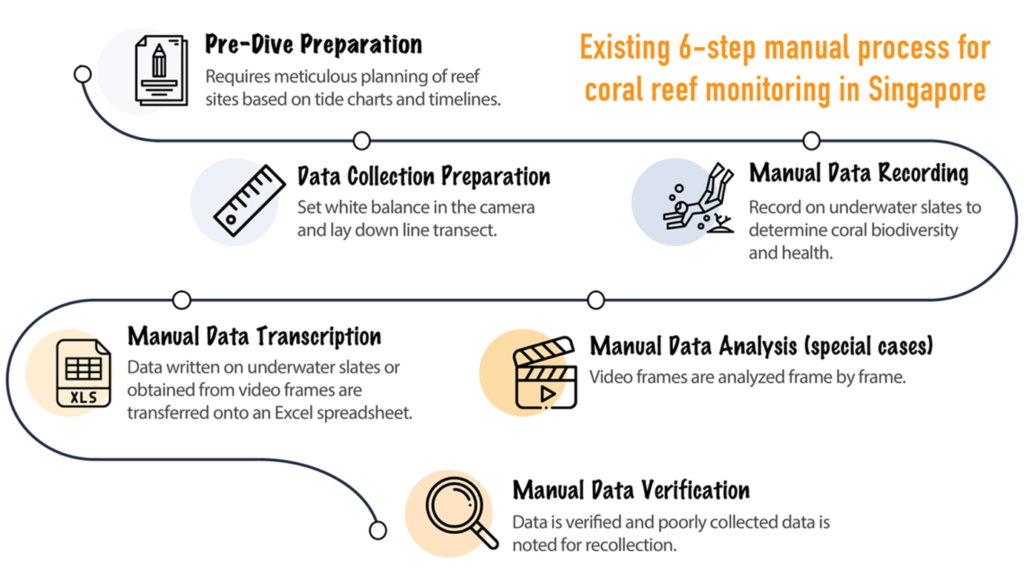 This entire workflow can be split into two categories: the actual dive (for data collection), and post-processing, where researchers would analyse the footage and images they’ve collected; photo by photo. Time-consuming work
“Every researcher that goes to the dive, they’d need up to three weeks to process the data,” Cherina points out. “And if that data is not up to standard, like if an image is blur, they would have to dive again,” Jamie adds. “There’s no easy way out.”

As a result, a lot of a researcher’s time is spent performing manual and low-value tasks, such as tracing coral images and identifying species, when they could have better spent the time on higher-value tasks like report writing and analysis.

This is compounded by the fact that there is a shortage of manpower in this area of research. “We need to automate what they do as much as possible,” Cherina summarises.

And Corabot was created to do that. To that end, the team designed Corabot to take over the entire six-step process from actual dive to post-processing. 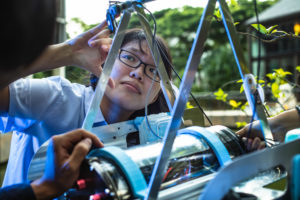 The dive mission is done by the robot itself. Weighing at only 12kg, the aluminum-framed Corabot is the lightest of its kind. Overall, the AUV is built for easy deployment and operability. “It’s able to navigate autonomously and carry out missions entirely on its own,” Lewin explains.

What this means is anyone – even you and I – can help bring the Corabot out to sea. “All you have to do is place it in the water, press a button (on a remote radio switch), and it’s ready to go,” Lewin elaborates. Once underwater, the AUV’s onboard GPS (for locations above water) and IMU (for locations underwater) sensors will guide the craft to a pre-programmed area. Then, the Corabot goes to work, scanning the area via what the team describes as a “lawn-mowing path”.

Moving in a “lawn-mowing” path

Once in motion, the AUV’s 12-megapixel camera will start snapping images of the reefs at a preset height of 50cm. Keeping this constant height is important in helping researchers keep tabs on the size of the corals – shrinking corals aren’t good news.

At this stage, it’s vital that the craft remains stable and undisturbed by strong undercurrents in order to obtain high-quality images. To ensure the stability of the craft underwater, the team designed the craft with five degrees of freedom. This means that the craft is able to hold its position and follow trajectory closely, even under the influence of underwater current.

Off to the cloud
After each dive mission, the Corabot will upload the images it collected directly into the Cloud. Three different sets of specialised, AI-powered algorithms then go to work analysing the images. These algorithms are responsible for three primary tasks: 1. Colour Correction, 2. Coral Species Prediction, and 3. Coral Segmentation. 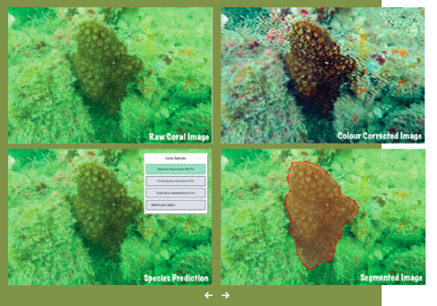 Post-processing results from the algorithms

These algorithms eliminate the need for researchers to pore over the data manually. What’s left for them to do is simply to verify the results through an easy-to-use Graphical User Interface (GUI), where they confirm the coral species predicted and/or fine-tune segmentation points drawn out by the algorithms. Once they’re satisfied, their results will be saved into a database for future reference.

To test its accuracy, the team requested the researchers to run their own images through the algorithms. The results were promising. “In fact, they’ve expressed that this is what they needed on the ‘public domain’”, Cherina recounts. “They were excited by the fact that they could save so much time,” she continues. “Because the entire community of coral reef researchers are still doing all this work manually.”

The first of its kind
Yes, the Corabot is the very first reef monitoring robot that’s able to take over the entire process from end-to-end – a feat only made possible with both hardware and software engineers on board.

It’s also the first robot to rely on machine learning rather than computer vision (like what other state-of-the-art counterparts do) to interpret what it “sees” underwater. This helped the team to overcome the challenge of poor visibility in Singapore’s notoriously murky waters.

“When we first started, everyone kept telling us how turbid Singapore’s waters are, and how difficult it will be to solve that problem,” Jamie recalls. “But I think the software people pulled through. They’ve earned the marine biologists’ and our professors’ validations. They did a really good job!”

While the future of Corabot is still in discussion, its inception is definitely a good start. And it may just, as the team suggests, “revolutionise and change the game” of the community one day.

Like what you just read?
Have a query for our students and/or Admissions Team? Speak to them here! 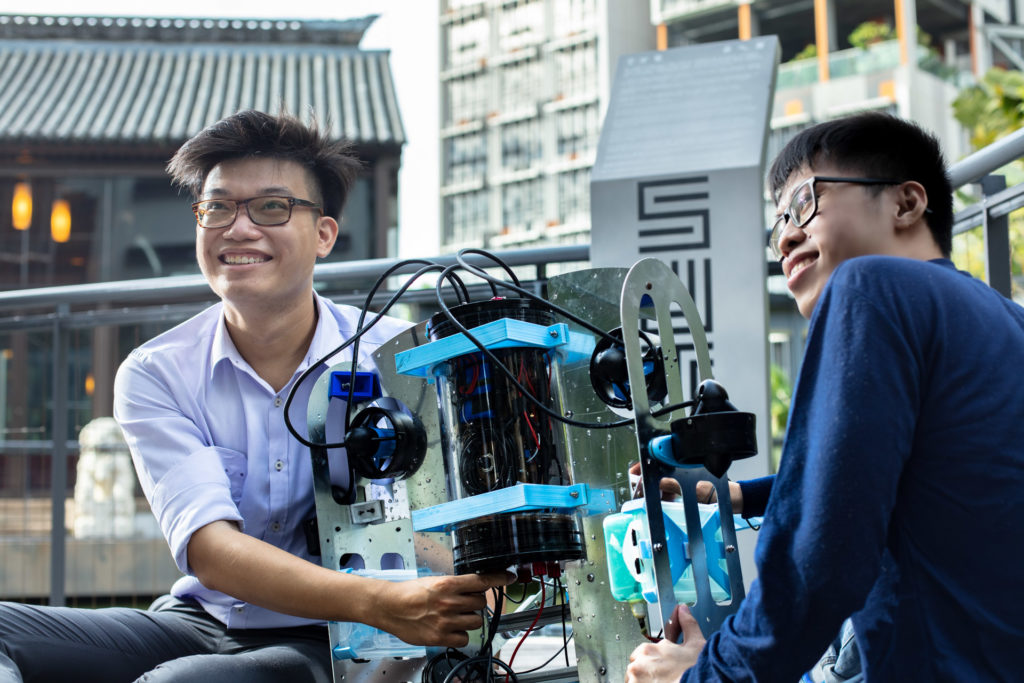